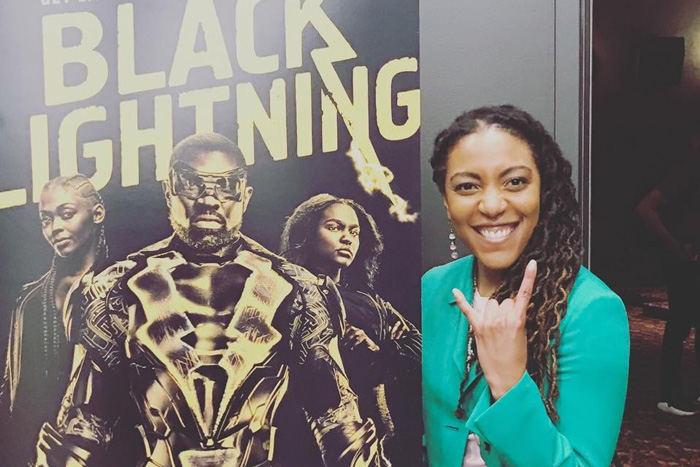 Former Rose Scholar, international business & management major and film studies minor Anedra Edwards ’10 uses her bent toward creativity as a visual effects editor for the CW Network. As part of the post-production crew, she manages over 1,800 visual effects shots for the network’s television drama Black Lightning.

Dickinson’s liberal-arts education helped me along my career path by teaching me to think with a holistic approach and about the “bigger picture.” My experience at Dickinson was very well rounded in terms of my course load, which allowed me to be a critical thinker in a wide variety of topics. In my current profession as a visual effects editor in television and film, I find that having the skill set to think deeply about the meaning of my art and how it can be applied to a variety of content and social topics is one of the takeaways that I cherish from being a Dickinsonian.

My favorite activities at Dickinson included being a midfielder for the Dickinson women’s lacrosse team, a member and captain of Third Degree Step Team and president of the International Business Society.

A great memory that jumps out at me from my time at Dickinson is when I studied abroad in Shanghai, China, for one of my business classes. It was a very new and rewarding experience.

I support Dickinson as an alumna by speaking to high school students recently accepted to the school at Dickinson-sponsored events. I share with them my college experience and act as a resource as they make their college choices. I also speak to current Dickinson students interested in television and film to share my career path should they have an interest. I have also interviewed high school applicants on behalf of Dickinson as well as served as a Dickinson representative for various college fairs. I believe it’s important to support and stay involved with Dickinson because you can be an inspiration for a student without even knowing it. Keeping in touch with the institution allows you to play a part in the next generation of scholars that will follow you, and with your support and involvement at the alumni level, you can help those scholars make an impact in the world as well.

I got interested in my line of work while I was at Dickinson. I took a number of film classes while I was there and chose film studies for my minor. What excites me most about being a visual effects editor is that I get to use my imagination every day. I’ve always been a creative person, and I worked hard to be in a profession where I get to prove that every time I go to work.

I work in visual effects for the CW Network’s DC Comics television drama Black Lightning. As part of the post-production crew, I manage over 1,800 visual effects shots that are used during the show’s seasons. I also handle the technical details of the visual effects developed by the show’s editorial team.

The most challenging part of my work is that a typical workday can be very long and tedious. I usually work 10 to 12 hours a day or roughly 55 to 60 hours a week.

The time I spent in Alaska for part of my master’s degree studying wildlife and environmental filmmaking while also learning survival training.

It would be a toss-up between Jesus Christ, Harriet Tubman or Michelle Obama.

I’d go to the future to see if humans are still living on planet Earth by the end of this century.

I’d change nothing about my life. I believe everything happens for a reason, and I would not have been the person I am today without all my life experiences.