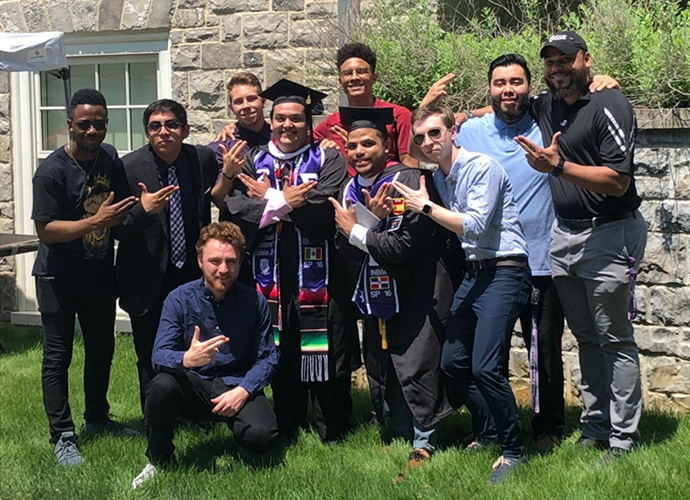 For nearly a decade, the brothers of Sigma Lambda Beta operated as a colony under the national chapter, but now, thanks to their hard work and persistence, they are an official chapter of the fraternity. The brothers join the expansive network of more than 120 chapters spanning 30 states.

To become a chapter, a colony must build strong membership, establish a sufficient budget and meet other minimum organizational requirements. Sean Ryan, associate director of fraternity life & experiential leadership education, likens the change to a baby bird taking its first solo flight out of the nest. “Most organizations are required to serve so many hours of community service and have a plan to sustain themselves through fundraising.”

Before becoming a chapter, the colony was essentially dependent on the national office, but now, as a full-fledged chapter, they will experience a range of benefits including access to regional and national conferences and events, eligibility for national awards, and more.

A SENSE OF BELONGING

“It not only validates the work that we personally have put into programming, recruiting, etc., but also the work of each brother that has crossed into this entity since 2008, our founding year at Dickinson,” says Mariel Arias ’19 (international business & management), a member since spring 2016.

Arias’ brothers Samuel Banuelos ’19 (international business & management, Spanish) and Esai Flores ’20 (biology) second his sentiment. “[The chapter] also solidifies our role here and allows us to think much more long-term about how we want to positively impact this community," says Flores. "Being a colony forced us to constantly think of short-term solutions to bigger problems. This recognition allows us to consider different ways to solve those problems to ensure we’re operating efficiently and effectively.”

ADHERING TO A PROUD HISTORY

Sigma Lambda Beta was formed as a Latino-based fraternity at the University of Iowa during the fall of 1985. After more than 30 years, the Betas continue to make an impact at some of the largest institutions in the Big Ten Conference and at some of the most prestigious schools across the nation. And since its founding, the Betas now accept members beyond their Hispanic-Latino origins, making them one of the most culturally diverse Greek life organizations.

The organization’s principles remain brotherhood, scholarship, community service and cultural awareness, and its mission is “to nurture and further a dynamic, values-based environment which utilizes our historically Latino based fraternity as a catalyst to better serve the needs and wants of all people.”