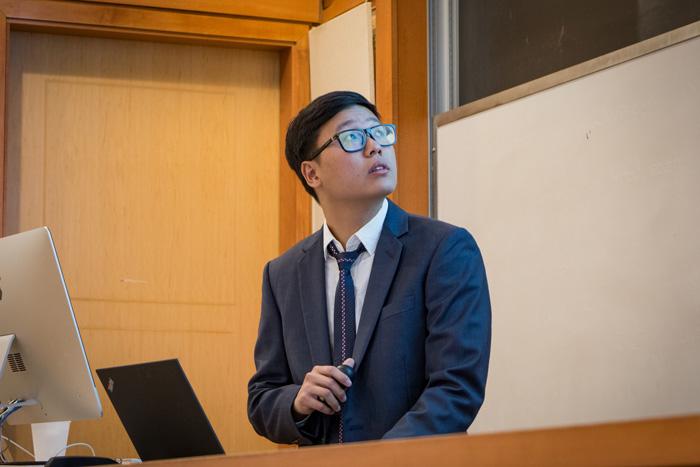 In a recent talk in Tome Hall, Daniel Ngo '19 discussed "Self-Adaptive Chaotic Mutation Operators in Evolutionary Computation” in his senior honors presentation. And while it sounds pretty complicated, the computer science and mathematics major has a knack for quickly putting it into layman’s terms.

“Genetic algorithm is a search technique that can be used to find the maximum or minimum of a problem,” the Hanoi native explains. “For example, if a company wants to know what is the highest amount of output that it can achieve, given the number of workers and other resources that it has, then the company can use a genetic algorithm to find that optimal output.”

As Ngo explains, genetic algorithm (GA) is inspired by the natural process of evolution, aka “survival of the fittest,” and seeks to find near-optimal solutions to difficult computational problems in a reasonable time. Like most best-laid plans, GA often comes up short for the task at hand. So Ngo’s project explored a way to mimic evolution’s random nature by replacing the random numbers usually used in GA with values from a chaotic map, a function that can produce more flexible distribution of values. “We expected this new change to make the algorithm more flexible so it could be used for a wider range of problems,” he explains.

Ngo will further pursue his studies in graduate school, particularly in the field of machine learning, which he says is a natural next step for someone interested in the idea of the genetic algorithm.

“An opportunity like this is a valuable experience for me to learn about how to conduct a research study,” Ngo says, citing the support he’s received along the way from his advisor, Professor of Computer Science Grant Braught, as well as Assistant Professor of Computer Science Farhan Siddiqui and Professor of Mathematics Lorelei Koss. “I enjoy this research-friendly environment that the department has provided us students, since it gives us a chance to work closely with our professors and hopefully get some good results out of our projects.”