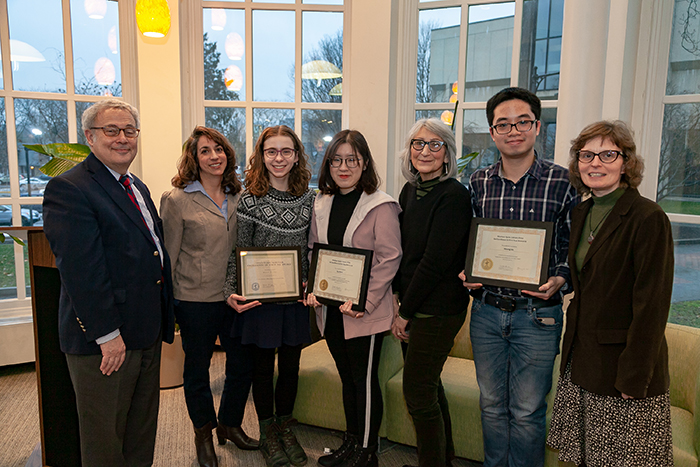 Dickinson recently honored three first-year students for writing and research through the First-Year Seminar Excellence in Writing Awards and the Waidner-Spahr Library Prize for Excellence in First-Year Research.

Mohala Kaliebe ’22 earned the First-Year Seminar Excellence in Writing Award with her essay "Strength or Weakness: When to Break the (Grammatical) Rules," and Tra Pham ’22 and Hoang Vo ’22 won prizes for Excellence in First-Year Research for their essays “Why Can’t I Look Like Her: The Impact of Photoshop on Female Adolescents’ Internalization of Beauty and Body-Related Concerns” and “Identity Theft: Is the U.S. Really Safe in the Police’s Hands?” respectively.

Now in its ninth year, the First-Year Seminar Excellence in Writing Awards honor up to three first-year students at Dickinson who display mastery of the learning outcomes in first-year writing and information literacy. This year was the first year the Waidner-Spahr Library Prize for Excellence in First-Year Research was presented. The new prize, which is awarded to up to two students each year, honors exceptional projects that effectively use properly cited research material to examine an engaging question.

Kaliebe wrote her winning essay in response to an assignment that asked her to analyze the value of formal and informal writing from multiple perspectives. “We had a lot of discussion about grammar," said Kaliebe, "and we’d read several articles from different perspectives, such as journalists, professors and people who either felt very strongly that one must adhere to grammar rules all the time or that grammar rules are useless and outdated.”

Pham gravitated to photo-editing programs in her research, she said, because she was bombarded by pictures of near-perfect models and actors in advertisements when she was growing up. “It can be easy for people to say that Photoshop is good or bad, but this applies to any kind of technology," she explained. "I learned that it’s not a black and white problem, but one affected by many factors. The more frequent use of self-image editing is associated with greater body concerns and beauty ideal internalization. This indicates an interesting bidirectional and mutual reinforcing relationship between social media, photo activities and body dissatisfaction.”

During his First-Year Seminar “From Facebook to Face Time: Living and Learning in Digital Times,” Vo affirmed his interest in computer science and decided to explore how the use of technology affects our daily lives. His research examined the relationship between privacy and security and how knowledge-acquisition agencies collect data on citizens. He argues that the current legal system has failed to effectively prevent citizens from identity theft threats.

“The federal government has made efforts to resolve differences among state cyber security laws," he said. "However, proposed regulations have existed as springboards for voluntary actions from organizations doing group cyber security rather than affirmative legal requirements.”

The First-Year Seminar awards exemplify the strength of the college’s programs for first-year students. These courses introduce students to Dickinson as a “community of inquiry” by developing habits of mind essential to a useful liberal-arts education.

“The ability of the students to engage constructively and the central roles of First-Year Seminars and first-year research and what we do really cannot be underestimated," said Provost and Dean of the College Neil Weissman during the awards presentation. "In that regard, these three students are real exemplars of what we hope to accomplish. Their work represents that kind of transition to college-level discourse that is what we aspire to for all of our students.”