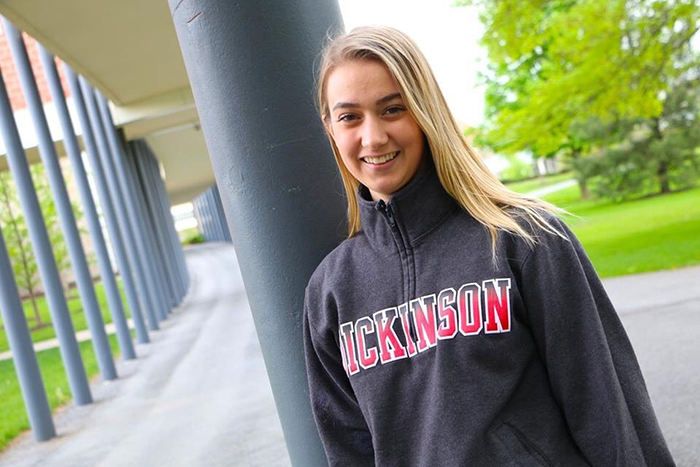 Before arriving on Dickinson’s campus, Samantha Walters ’22 had already conducted research at the U.S. Army War College’s Heritage Center, where she worked to help share veterans’ stories. She says that after entering the foster care system and graduating from Milton Hershey School, she appreciates the many people who have helped her along the way, and she hopes to pay it forward.

Undecided, but interested in declaring political science or international studies.

I decided to attend Dickinson due to its community feel. I went to a high school that was so much a community filled with kind and caring people that I knew I wanted a similar feeling in a college. Touring Dickinson, I got that similar feeling from not only other students but the staff here too.

Why I’m interested in social sciences and cultural studies:

Growing up, I had lots of different people in my life advocating on my behalf, and without them I can truly say I wouldn’t be where I am today. In high school I discovered my love for advocating and public speaking, so I decided that I would use my experiences and skills to speak out for others.

I had an internship at the Army Heritage Education Center (USAEC), here in Carlisle. When I heard about this incredible opportunity, I knew I would enjoy it because I love history and I knew it would give me a chance to tell the stories of some people who couldn’t tell their own stories.

I was in the USAHEC archives, where I researched different veterans’ stories and then wrote their stories to be published for the public. I learned so many different things while researching, but what stuck out to me most were the similarities in all the stories. While each soldier had different experiences, they also all had similar ones. All of them gave up so much for our country, and even after getting hurt in an explosion, becoming a POW or losing a family member, they kept fighting for us. All of the veterans saw some horrific things, but from what I was able to collect from my research, all of them were glad to be able to give to our country.

My older sister. She taught me to always be kind to others and to stand up for what you believe in.

While I’ve only been at Dickinson a short while, I’ve learned many valuable lessons. I think the most important thing I’ve learned so far is that while we all come from different backgrounds and different experiences, at the end of the day, we’re all Dickinsonians, and we all will be there for each other.