The new wordmark can already be seen on banners around campus 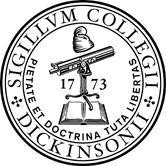 The identity system, designed by Claude Skelton Design in Maryland, features a new college logo and a redesigned seal that, over the course of the next year, will be incorporated into all official print and online communications. The Board of Trustees approved the new seal by a unanimous vote earlier today.

“Our new visual identity recalls the college’s historic significance and time-honored appeal while looking confidently and assertively toward the future,” President William G. Durden ’71 said. “It tells the world that Dickinson is truly on the move.”

Spelling out the name “Dickinson” in upper- and lowercase letters in the Hoefler typeface, the new logo will primarily be displayed in red, but can also be rendered in black and gray. A second, graphic version of the logo will be introduced later this month.

The new logo replaces the compass rose mark, which is being retired. The compass rose was introduced in 1999 as the college was expanding its reach and strengthening its name recognition nationally and internationally. That mark, Durden noted, “left no doubt that we were Dickinson College — the words were clearly readable, unlike in the previous identity system.”

Durden added that the compass rose served its purpose well: The college has risen sharply in reputation and has become a direct competitor with the nation’s finest liberal-arts colleges. As was planned in 1999, he said, the compass rose is being phased out now that its purpose has been accomplished.

“Our strong brand recognition secured over the past decade permits the college to adopt a visual identity that reaches back to its origin and traditions while imagining the growth and innovation to come,” Durden said.

Stephanie Balmer, vice president for enrollment, marketing and communications and dean of admissions, said the new identity system would be a strong signal to prospective students and their parents that Dickinson has taken its rightful place among the nation’s premier liberal-arts colleges.

“The vibrancy of the new logo captures the spirit of pride, confidence and energy that runs throughout the college,” Balmer said. “Our visitors to campus tell us that sense of vitality is palpable.”

The logo can already be seen on banners that hang on High Street, between West and Belvedere streets, and in many of the marketing publications recently produced by the Office of Marketing and Communications and the Print Center. It also appears on business cards and stationery newly ordered through the Print Center.

Both the new logo and the seal will soon be incorporated into apparel and giftware items sold through the bookstore. A prototype T-shirt was distributed to fans at Dickinson's Homecoming football game last month.

The athletics department will continue to use the Red Devil and the devil-tailed “D” as its primary brand marks.

Dickinson’s updated seal, which serves as the official academic signature of the college, features newly rendered illustrations of its essential elements, namely the liberty cap, the telescope and the open book; a new typeface that complements the new logo; and new decorative flourishes.

The seal has undergone only slight modification since its commission by the Board of Trustees in 1784. College bylaws grant the trustees authority to change the seal at their discretion.