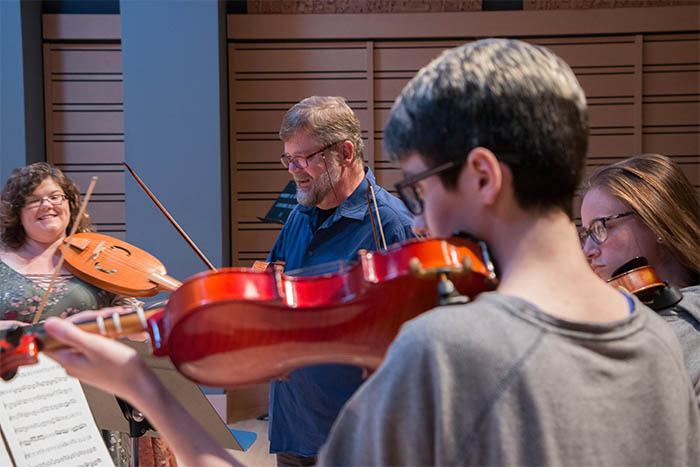 The Newberry Consort, one of the world’s premier early music ensembles, recently provided the Dickinson College community a glimpse into the love story of 12th-century scholar Pierre Abélard and his intellectually gifted student, Héloïse D’Argenteuil, in a performance that embraced period-art images and costumes, traditional instruments of the Middle Ages and excerpts of the famous love correspondence.

The performance, Forbidden Love: The Passion of Héloïse and Abélard, included works by medieval composers Guillaume de Machaut, Baude Cordier, Jacob Senleches and others. It was the culmination of a four-day artistic residency that engaged students in a variety of formats, including a choir workshop, masterclasses with voice and string students, visits with music history and theatre classes and other small-group interactions.

“The Newberry Consort is known for the rigor and creativity through which they approach questions regarding historically informed musical performance,” says Associate Professor of Music Ellen Gray, who facilitated the residency. The ensemble began the week working with students individually on everything from proper vocal technique to effective performance practices.

“I really appreciated this opportunity to work with a professional in the field,” says David Swenson ’19 (music and international studies), who has been singing with the choir and taking private lessons since his first year at Dickinson. He notes that this masterclass was “very helpful” because it taught him professional tips about musical phrasing—a skill that will help him interpret and perform music.

While the Newberry Consort is lauded as representing the highest caliber of singers and instrumentalists of early music, the artists’ interests are as diverse as their repertoire, spanning studies in musicology and dramaturgy, as well as set and costume design. So it made sense that the ensemble visited both music and theatre classes, working with students from several different majors.

In Gray’s History of Music class, the discussion was framed around medieval troubadour and trouvère music and the staging of the letters of Héloïse and Abélard. Asha Tran ’20 (music and psychology) was particularly struck by the class conversation.

“I was able to learn about what it means to put together such unique and complicated works into one cohesive performance,” says Tran. “It was also inspiring to get to know these wonderful musicians and hear about their musical journeys.”

In Professor of Theatre Sherry Harper-McCombs’ Introduction to Theater Technology class, students got a glimpse into the history of French costume design during the reigns of Louis XIII through Louis XVI, examining examples of costumes from operas during the 17th and 18th centuries, while also learning about the theatrical costume world firsthand from costume designer Meriem Bahri, who instructed the class.

“As a person interested in history, I definitely found a collision of two worlds in the Newberry Consort residency,” says Lillian Carver ’21 (medieval & early modern studies and theatre arts). “Often, in theatre, I find that we can be distracted by ‘the new’ and constantly improving ways of building, designing and performing, and we don’t always spend as much time looking at how we got to where we are today. I really enjoyed getting this glimpse into theatre and design history.”