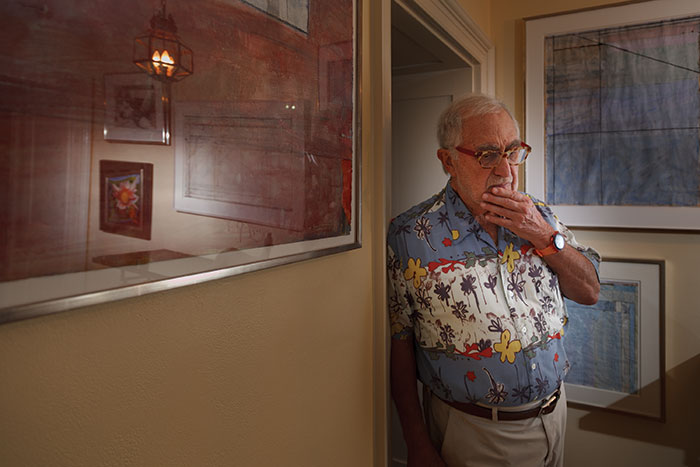 To understand Sam Rose ’58’s legacy at Dickinson, just look to the forces behind it. Rose is many things: real estate mogul, attorney, environmentalist, philanthropist, art patron, erstwhile lacrosse star. And despite his many roaring successes, he champions the dark horse every time. “Yeah, I’ve got a soft spot for the underdog,” he says with a gravelly chuckle. “Maybe because I was one myself.”

Rose grew up in a working-class neighborhood in Baltimore, where his Jewishness set him apart. An athlete and voracious reader who wasn’t afraid of a good fight, he devoured books about crusading lawyers and set his sights on a law career. And after Dickinson and two Ivy League colleges rejected his application, he traveled to Carlisle to plead his case.

Chace Davis ’50, P’84, then assistant dean of admissions, was a fellow Baltimorean, not long out of college, and while he wasn’t impressed with Rose’s average grades, he must’ve admired the kid’s intelligence and moxie. Davis asked if Rose played lacrosse, and the rest is history.

During his first year at Dickinson, Rose joined the Phi Kappa Psi fraternity and gained a reputation as an intrepid athlete. All was going well until spring. “My father didn’t graduate from high school and didn’t see the value in an education,” Rose says. “He cut off my tuition and told me to come home and get a job.”

As a first-generation college student, young Rose had already cleared more than one hurdle, and he wasn’t about to take this one lying down. When George Shuman ’37, longtime college treasurer, opened a door—a 50/50 scholarship-loan—Rose charged through it, waiting tables at his fraternity (this was pre-Dining Hall days) to pay room and board and joining ROTC to earn pocket money, all while still playing two sports.

“That taught me the value of the almighty buck,” he says. It also demonstrated, again, the difference one person can make in a young life.

The next three years on campus passed steadily by. Rose studied political science and philosophy and continued to read up a storm outside of class. He recalls an art-appreciation course that spurred him to begin to collect art. And during the 1958 men’s lacrosse team’s final game, Rose set up the winning goal that led to Dickinson’s only national lacrosse championship.

Fresh from graduation, Rose enrolled at the University of Baltimore law school, taking night classes and working by day. After a miserable stint as a middle-school teacher, he found a real estate job, passed the bar on schedule and garnered an entry-level offer at a law firm.

“It would’ve meant a pay cut, so I said, ‘Forget that!’ ” he recalls. “I was doing pretty well, and I had a mentor I respected, Jim Rouse. I didn’t practice law for one day.”

Instead, Rose climbed the real estate ladder, eventually becoming a high-profile commercial developer who’s chiseled a mark on the D.C. skyline and founded four firms (the fourth, Greenebaum and Rose Associates, was the charm), with projects that include the 890,000-square-foot Federal Energy Regulatory Commission building. “All my lawyer friends wanted to be me, because while they were working by the hour, I was working by the building,” he says with a laugh.

Rose still works part time, with offices in two cities, and he’s amassed a spectacular art collection. He’s also a past vice president of the Smithsonian Art Museum board. He tends a koi pond and apiary at home and produces privatelabel honey. He also likes cards, golf, fishing and boating (in the ’70s, he co-owned a boat with architect Frank Gehry).

As angler and beekeeper, he’s seen the effects of climate change in sharp focus, and he’s committed to helping to effect positive change. Rose consults with top experts and supports big-thinking environmental efforts, including a current project to build clean-energy plants.

In 2012—the year granddaughter Nataleigh Kohn graduated from Dickinson—Rose, a trustee emeritus, and wife Julie Walters established the Sam Rose ’58 and Julie Walters Prize at Dickinson College for Global Environmental Activism, an annual $100,000 prize bringing renowned leaders and thinkers to campus. This year’s recipient is the activist group Our Children’s Trust.

Rose, who received Dickinson’s honorary doctor of philanthropy degree in 2013, also invests in the next generation of problem solvers: Since 2000, he’s provided more than 150 scholarships for deserving students, and in 2014 he funded the new Durden Athletic Training Center. 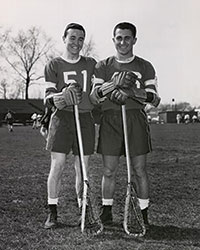 This past spring, Rose deepened his legacy with an additional $5 million gift—the largest gift bestowed on the college in 12 years. It endows the Rose-Walters Prize and funds additional scholarships, leveling the playing field for still more underserved students who don’t have straight-A transcripts but show promise in other areas—kind of like a scrappy Baltimorean who made a case for his own education more than six decades ago.

Every spring, Rose meets his scholarship students during an on-campus dinner, and he particularly enjoys the letters they send. “I get paid back  just by reading them,” he says. “When you  help somebody get an education who really  needs the money, it’s a life changer. I know what that’s like.”

Discover how the art collection Rose started at Dickinson has grown into a museum-worthy showcase.

Read more from the summer 2018 issue of Dickinson Magazine.