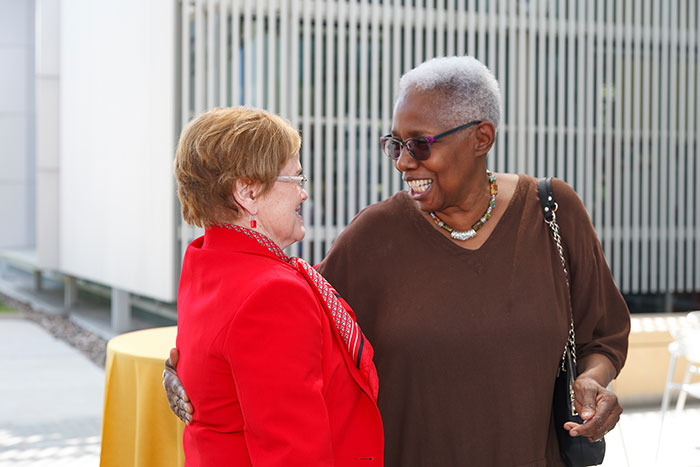 The crowd of Dickinsonians in the Bosler Hall Atrium on Saturday, June 9, had a secret, and they couldn’t wait to spill the beans. They’d come to honor longtime Dickinson administrator Joyce Bylander on the eve of her retirement as vice president of student life, and they’d contributed to a cause she knew nothing about.

“Dean B” arrived at Dickinson in 1992 and filled many roles in the student life division. She also taught classes, launched and oversaw the New York and Los Angeles Posse Foundation programs and served as the college’s first Title IX coordinator. And the mark she left on the lives of countless Dickinsonians cannot be quantified.

During the Alumni Weekend reception, Judith Rudge ’05, a member of Dickinson’s first New York Posse, shared that $134,800 had been donated to the new Joyce A. Bylander Scholarship. Since Bylander announced her retirement in January, 195 students and alumni have secretly stepped up to honor this woman who did so much for others in a way that will allow her to continue making a difference in the lives of students.

“Dean B’s door was always open … so many of us not only  survived at Dickinson but thrived because of her,” said Valeria Carranza ’09, a member of Dickinson’s first Los Angeles Posse. “It’s so good to feel the love in this room. She’s so deserving of this and so much more.”

To add your contribution to the Joyce A. Bylander Scholarship, visit dickinson.edu/gift, select "other" in the designation drop-down menu and note the name of the scholarship in the corresponding box.

Read more from the summer 2018 issue of Dickinson Magazine.