From Dickinson College to the PGA Tour 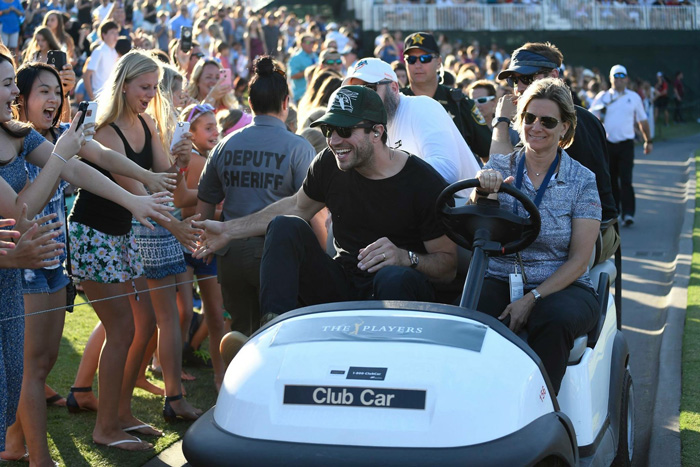 Vice President of Integrated Communications for the PGA Tour Kirsten Nixa Sabia '92 gives country musician Sam Hunt a ride during The Players Championship. "We have a Military Appreciation Ceremony at The Players Championship every year highlighted by a country musician performance," she explains. "Up until this year, I handled all the direction of the concert. I worked with guys like Tim McGraw, Darius Rucker, Luke Bryan, Dierks Bentley, Jake Owen, Big & Rich, Toby Keith and last year, Sam Hunt."

Despite being a Red Devil student-athlete in two sports at Dickinson—soccer and softball—Kirsten Nixa Sabia didn't think she'd end up with a career in sports. After graduating with a major in political science she began to forge a career in education. But her Dickinson experience prepared her to be flexible and adapt, and today she's vice president of integrated communications for the PGA Tour.

What are your duties as vice president of integrated communications for the PGA Tour?

After nearly 15 years on the marketing side of the Tour business, I made the transition last year to our communications team. The department was realigned with new leadership, and I was thrilled to have the opportunity to head up the internal communications pillar for the organization. While the league is based in Ponte Vedra Beach, Florida (outside of Jacksonville), we are spread out. That includes 17 buildings here in St. Johns County, more than 10 satellite offices around the country and eight international offices across four continents. The best part about my role is the people with whom I get to work. Passionate, hard-working, smart, innovative and fun. The Tour just retired the oldest tagline in sports, “These guys are good,” and that for sure rings true in the offices of the world’s leading golf organization.

How did your Dickinson experience prepare you for your career with the PGA Tour?

I’ve always felt that my experience at Dickinson taught me to be well-rounded in my professional career. Playing a Division III sport called for passion. Writing for the Dickinsonian allowed me to get out of my comfort zone—I wasn’t an English major so writing didn’t come naturally. Now, I pen speeches for our commissioner from time to time. Belonging to Delta Nu instilled a spirit of volunteerism and a sense of community. Living on campus developed a nimbleness for diversity, and living off campus helped the transition in to being a “grown-up.” Studying abroad inspired a sense of adventure and comfort for travel. I credit my time at Dickinson in large part to who I am today.

How does a Dickinson liberal-arts education prepare graduates for such a wide range of careers?

In the early to mid '90s, my first five years post-Dickinson, I worked at two separate private schools. I thought education administration was going to be my career. But something changed, and now, with more than two decades of experience in the golf industry, who would have thought? Not me, to be honest. Dickinson's liberal-arts education can teach you to focus—look at our language and international studies programs—but more important, it can teach you to change course, adapt and be comfortable doing so. I was a political science major. I might not be in politics, but it all worked out in the end.

Do you have any fun experiences you can share about your time with the PGA Tour?

Working in sports is essentially working in the entertainment industry. I’ve had the opportunity to meet a number of influential people from the sports, music and political worlds. One of my favorite stories was from 2015 when we were playing the Presidents Cup in Songdo, Incheon, Korea, about 45 minutes outside of Seoul. I was co-directing the opening ceremonies with a colleague, a project we worked on for nearly 18 months, which was televised around the world. On the day of the event, which included dignitaries like former President George W. Bush as well as the sitting, but since impeached, president of Korea, Park Geun-hye, I negotiated a meeting between the U.S. Secret Service and Korea’s Presidential Security Service. There were 13 men in the room and me trying to determine how many weapons the U.S. Secret Service could bring in to protect President Bush. The entire meeting was in Korean, which I don’t speak, and hand gestures. It was surreal. In the end, we got what we needed for our guy.

What do you look back on fondly about your Dickinson days?

As with my career at the Tour, the fond memories from my time in Carlisle are all about the people—classmates, professors, coaches—many of whom are still a part of my daily life, thanks to social media. I was back on campus for our 25th reunion last year, and I’m already excited for the 30th. I credit the success of those friendships to communication, or lack thereof. We certainly didn’t have mobile devices; we barely had computers. So we had to communicate. Because we walked down the hall, we dialed the rotary phone, we wrote on white boards on our dorm doors, we sent real letters. There was substance. I don’t say that to disparage today’s students or society. Their opportunities three decades later are vast. But the “simpler life” of the late '80s and early '90s molded relationships that stand the test of time. And for that I’m grateful.