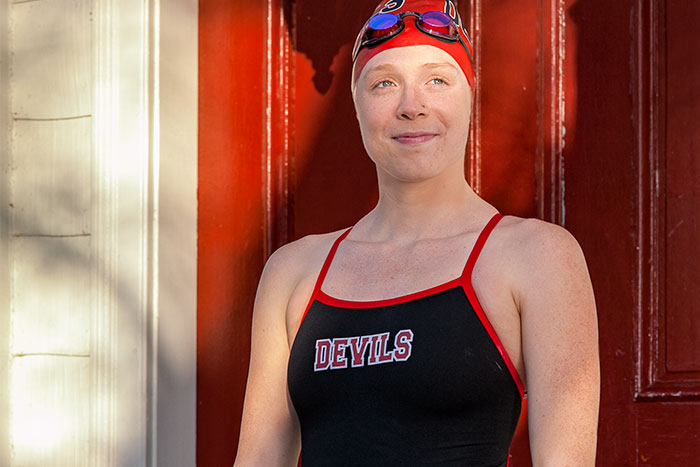 Olivia Lyman ’19 could feel every muscle in her body burning as she swam forward in the pool. Her legs, still kicking smoothly, felt heavier with each stroke. Her arms ached with each downsweep, each catch, each release. There was no break in the pain.

She was on the 40th lap of the freestyle mile. She had 26 laps to go. She could feel her body shutting down.

But then, as she turned her head to take a breath, she saw the swimmer next to her pulling ahead. Suddenly, Lyman knew she could push herself harder.

More than 600 meters later, she touched the wall and stopped, feeling worse than she ever had in the water, sure that her time would reflect it. But then she looked up at the board—16:56.85, her best time yet, good enough to qualify for nationals in her first year as a Red Devil swimmer.

“It’s like Coach says,” Lyman explains. “You can feel terrible in the water and end up with your best time. It’s all about tapping into that mental toughness, embracing the mentality that nothing is impossible and finding out what you’re capable of when you have to really push yourself.”

This willingness to push herself has served Lyman well in the pool. Now a junior, she’s earned multiple spots on the All-Centennial Conference team, won three straight conference titles in the mile and the 500-yard freestyle and currently holds four individual Dickinson swimming records. 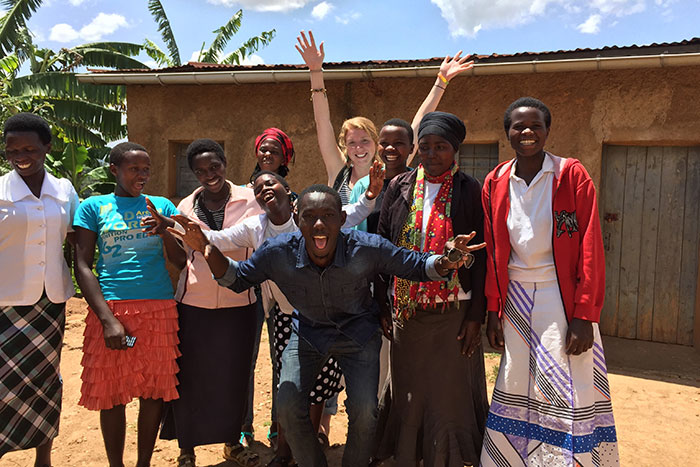 That attitude also has served her well outside the pool. This fall, when the international studies major traveled to Rwanda for a study-abroad semester focused on post-genocide restoration and peace building, she faced a host of challenges. First came the culture shock, then the hurdles of communicating in different languages, and finally the emotional strain of discussing the horrors of genocide firsthand with the victims and perpetrators.

Yet all the obstacles only made Lyman’s experience richer. “I learned so much more than you could get from any textbook,” she says. “It was very demanding, but once I pushed through the cultural challenges, I felt like I was more myself than I’d ever been.”

For Lyman, becoming “more herself” has meant discovering a passion for women’s empowerment advocacy. With help from Women’s & Gender Resource Center Director Donna Bickford, she launched a Dickinson chapter of the nonprofit She’s the First, which helps young women around the globe become the first in their families to graduate from high school. Having interned with lawyers at a nonprofit focused on global women’s rights last summer, she’s now considering law school or the Peace Corps after Dickinson. But either way, Lyman knows she wants to use what she’s learning here to launch an international career focused on helping more women find brighter futures through education.

And she’s thankful that this is exactly what she’s found at Dickinson, where the challenges that have forced her to push herself have been balanced by the kind of nurturing and mentoring only possible in a close-knit learning community.

“At first I was a little nervous about coming to a small school because I thought I would be stuck in a bubble, but the support I’ve gotten from my teammates, friends and mentors here has really done the opposite,” she says, noting that in addition to Bickford, she benefited from advice and assistance from Assistant Professor of French Linda Brindeau, Associate Professor of Political Science and International Studies Andy Wolff and Head Women’s Swimming Coach Paul Richards. She’s even gotten a hand from President Ensign, who connected her with contacts at the Rwandan Embassy before Lyman left for her study-abroad trip. “If I’d gone to a big school, I don’t think I would have been able to go nearly as far as I have at Dickinson.” 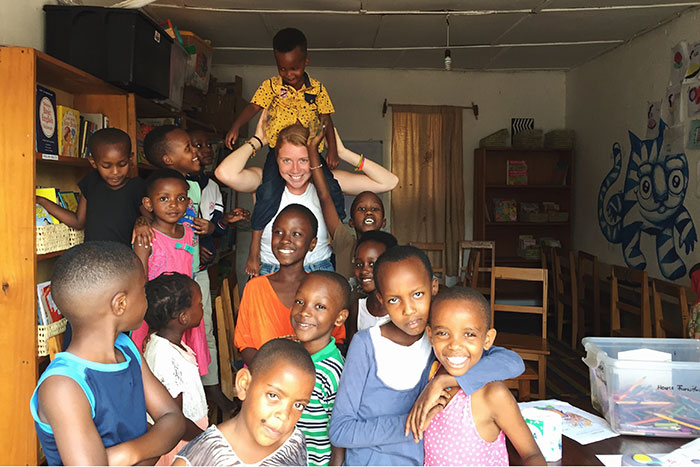