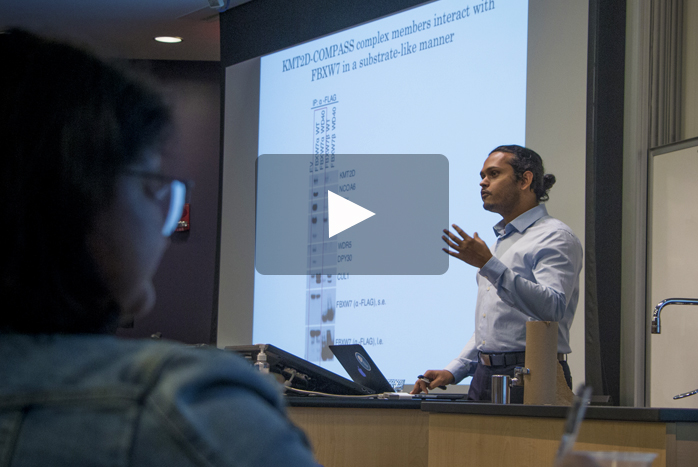 Rizwan Saffie '14 addresses the crowd during his talk with Myungsun Shin '14 about their Ph.D. candidacies. Photo by Joe O'Neill.

"The research experience I had at Dickinson, and the relationships I formed with various professors, helped prepare me to apply to graduate schools, talk about my research and land interviews with various schools as well as gain admission into various schools," says Saffie, who majored in biochemistry & molecular biology at Dickinson and now studies lymphoma and other blood cancers.

The two returned to campus recently to talk to current students about where their Dickinson education took them. As they discussed the work they are doing in their graduate programs, they reflected on the impact Dickinson's useful liberal-arts education had on them. "I originally came to Dickinson thinking that I would major in biology, but in terms of curriculum, I had a lot of freedom in choosing different classes, so I got to take chemistry, neuroscience and developmental biology courses," say Shin, who majored in chemistry. "I think [that] helped me a lot in navigating through what kind of research topic I wanted to target."