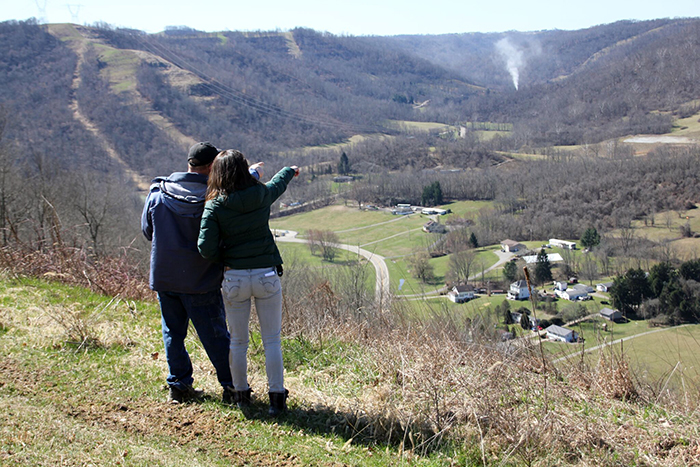 Leann Leiter '08 (right) in the field, with a local resident who wanted to learn more about the environmental effects of fracking near his home.

Ask folks what they think about fracking in their hometowns, and you’ll hear wildly different opinions. Some point to polluted air and water supplies, greenhouse gas emissions and deleterious health in affected communities, while others see economic opportunities.

As a field advocate for an environmental nonprofit, Leann Leiter ’08 resolutely pitches her tent in camp A, but to be successful, she must also be sensitive to those who think differently, and may benefit from learning more. This Dickinsonian and former studio art major is well-suited to that delicate task.

Leiter grew up in Marysville, Pennsylvania, a rural area about a half-hour’s drive from Dickinson College, and spent much of her childhood outdoors. She continued to hike and rock-climb as an undergrad, was voted vice president of the Outing Club, and oversaw the climbing wall as a student-worker. She also was involved with Spectrum and the Arts House and studied abroad in Mexico during her junior year.

After graduating with an art degree and Spanish minor, Leiter worked for the Commonwealth of Pennsylvania, providing Spanish-English translation for Commonwealth agencies under the governor's jurisdiction and connecting citizens with social services. She enjoyed the social-justice focus and the close contact with the public, and five years after graduation, she also became involved in environmental justice issues, volunteering with Harrisburg-area organizations and joining efforts to protect the Susquehanna River from polluted stormwater runoff.  Leiter also led a successful campaign in her local borough to establish a formal Environmental Advisory Council.

In 2014, she took the plunge and enrolled at Northern Arizona University, graduating two years later with a master’s degree in sustainable communities. That led to a 10-month research fellowship with two environmental organizations devoted to fracking issues and public health. Last November, she joined Earthworks, a nonprofit that works with communities and grassroots groups to reform government policies and improve corporate practices, a job that takes her into the outdoors she loves and draws on diverse skills. 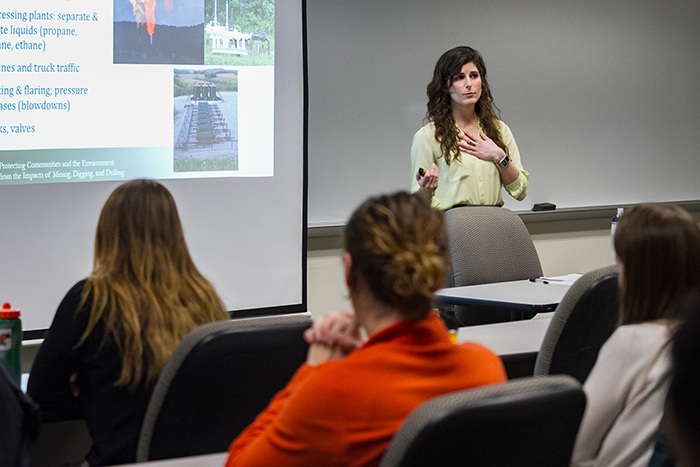 Leann Leiter '08 speaks with students about sustainability careers during a recent visit to campus. Photo by Carl Socolow '77.

Leiter’s team uses infrared technology to measure and document fracking-generated pollution in Pennsylvania and Ohio, and shares findings with community members so they can communicate concerns with elected leaders. In addition to researching fracking facilities and coordinating research trips to the sites in partnership with local residents, she accompanies the thermographers to gather data and publicizes their findings via blogs, reports, videos and social media. She also communicates in person, at public events, through media partnerships, and she works directly with regulators and educators, keeping them abreast of the latest developments and the health and environmental effects of fracking-related pollution.

She says her art professors in particular inspired her to think critically and express herself confidently and effectively, and she uses her art training to present complex information visually, in charts, graphs, videos and presentations. And as the first in her family to attend college, Leiter came to the job adept at communicating across backgrounds and cultures, a skill she deepened while studying abroad in Mexico for six months.

Living and working in a heavily fracked county in Pennsylvania, Leiter taps those communication skills in off-hours as well. She says a perfect opportunity recently presented itself while she was running on a nearby trail and encountered workers laying a gas pipe.

“I need to make sure that I'm attentive to the fact that this industry means different things to different people, but that is truly one of my favorite aspects of this work,” Leiter says. “I have this unending fascination with bringing together people who may think they have different perspectives and helping them realize common values and common priorities.”

Her most difficult days arrive when she’s working with families who are experiencing health problems consistent with research on fracking exposures, such as nosebleeds, asthma or cardiac symptoms. The high points are when she’s able to share community members’ stories in blogs or video and give them the tools to communicate directly with legislators, and when she’s able to see positive changes unfold.

One of those victorious moments swept in the day after she visited Dickinson in February to speak with students interested in environmental studies & environmental science careers. After a concerted effort by concerned residents pressuring the Pennsylvania Department of Environmental Protection to expand its 30-day window for the public to weigh in on a major pipeline project, the department extended that window by 60 days and announced that it would hold public hearings in all three counties through which the proposed pipeline would run.

“I’m absolutely thrilled, because that’s a lot more time to get meaningful public input,” she says, “which means that there’s a lot of good work ahead.”