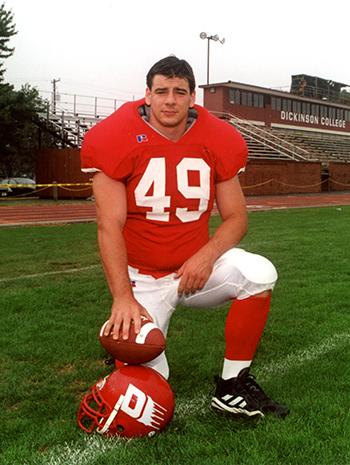 Before Keith Fischer ’02 could embark on the gridiron career that would lead him to Dickinson’s Sports Hall of Fame, he had to overcome every football player’s toughest obstacle—a worried mother. Fischer’s managed to keep him from playing for the Bernardsville (N.J.) High School team during his freshman year, but he was relentless.

“I literally bothered her about it every day for a year,” he recalls with a laugh. “Finally, my sophomore year one of my mom’s friends told her, ‘Hey, he’ll be a year behind everyone. Let him try out, and he probably won’t be that good, so he won’t like it, and then you’ll be done with it.’ ”

It was a solid plan with just one flaw: Fischer happened to be a natural. He was named a starter for his first game as a sophomore and went on to play nearly every snap of every game the next three years as a linebacker, fullback and sometimes tight end. When it came time to think about playing on the college level, he chose Dickinson for two reasons.

“Academics were really important for me,” says Fischer. “I wanted to use football to go to a school that was very strong academically. And then there was Coach [Darwin] Breaux. I was really impressed with his honesty. I had coaches from other schools promising me the world, telling me I would start right away, but all he promised me was a chance.”

That chance was all that Fischer needed. Moving from linebacker to defensive end and sometimes tackle, Fischer was named Team Rookie of the Year as a first-year, earned All-American honors as a sophomore and was a First-Team All-Centennial Conference player during his sophomore, junior and senior years.

As relentless on the football field as he’d been trying to get onto it, Fischer showed that his mother should have actually been worried about opposing quarterbacks. He collected 16.5 sacks in 1999, claimed the conference and school record for tackles for a loss (49.5) and still ranks second in Red Devil history for career sacks (27.5).

“I always had this attitude that the opposing quarterback gets all the attention and praise,” he explains. “He’s the face of the program, the pretty boy—all those things that a defensive lineman is not. But then you have the opportunity to knock him off his pedestal. I always played with that chip on my shoulder.”

After graduating, Fischer followed his passion to the next level as a college scout for the Philadelphia Eagles for eight years. But he returned to Dickinson as assistant director of admissions two years ago, which makes earning a spot in the Hall of Fame all the more meaningful.

“Dickinson was such a life-changing experience for me that the school just became my home,” he explains. “Even when I was with the Eagles and we went to the Super Bowl, I was always coming back to check on the team and see if I could help out. I was always most proud of what I accomplished here, so this is just a tremendous honor.”

Now Fischer is once again a Red Devil, having joined the football team as linebacker coach this fall. Add this to his full-time job with admissions and his work as WDCV sports-broadcasting advisor, and the bulk of Fischer’s time is dedicated to Dickinson—but for him, that’s time well spent.

“I just want to be able to help people in the same way I was helped,” says Fischer, who lives in Carlisle with his wife and fellow former Red Devil athlete (women’s volleyball), Tara ’02, and their 6-year-old son, Luke. “I got a ton of help along the way, from coaches, professors, my wife. Now I have that chance, and I want to make sure that these guys get the most out of being student-athletes at Dickinson.”