From Court to Court 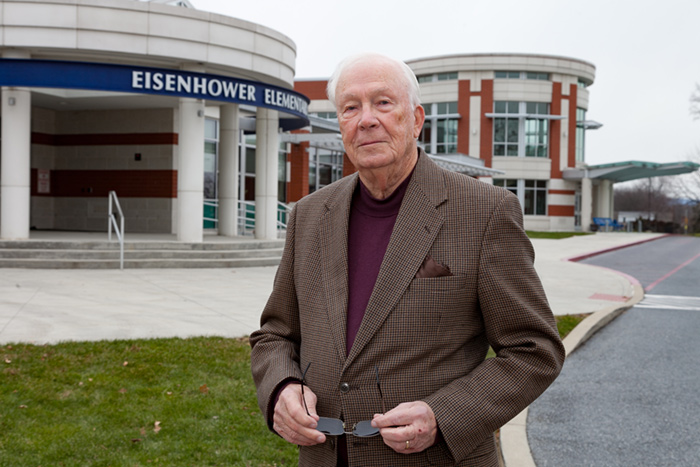 John Slike ’51 is a storyteller. He relishes in the process of recalling the past several decades of his life, sharing that “while it may take a little time to do, I do have the time and will likely enjoy it.” And his stories bring to life more than three quarters of century, from his time as a basketball player at Dickinson to his years as a lawyer and community leader. 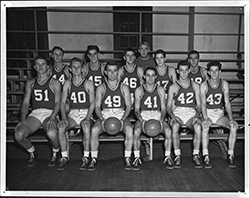 Thinking back on his time at Dickinson, Slike recounts the little details alongside myriad anecdotes—a college dance at which Stan Kenton played and a professor complained because his jazz was not easy to dance to; the compulsory religion class students had to take, thanks to which he learned more about the Bible his first year in college than his entire life; the history lectures by Professor Whit Bell; the memories of the outstanding 1947-48 basketball team, which was inducted into the Athletics Hall of Fame and was composed of the youngster Slike and many more seasoned World War II veterans.

Apart from all these moments, Slike also recounts, more somberly, characteristics of his experience that stood out in more negative ways. Discrimination and racism were ubiquitous. Changes in the wider world were only beginning to occur during his time, and Slike remembers students standing up to restaurant owners in Carlisle who would refuse service to blacks. John Hopper ’48, a friend and fellow basketball player who would later become a state senator, confronted a bartender refusing to serve a black friend, telling him they would “either serve him or none of us.” They were all served.

Slike majored in political science but describes his education as broad across the humanities and the sciences. “Any kind of liberal arts lends a purpose to your life, keeps you interested in things other than your own occupation and your own community,” shares Slike, as he talks about his passion for history and travel but admits to not having used much algebra since finishing college.

“Fraternities were a big part of your life in those days,” Slike adds. “They gave you a chance to identify with a group.” Along with the basketball team, Slike identified as a member of the Beta Theta Pi fraternity, and many of his memories surrounding Dickinson are associated to these two groups. He calls his basketball career “certainly a highlight of my life at Dickinson.” One of the most memorable moments was the first game in his sophomore year when he came off the bench and the team inched ahead with seconds to go thanks to Slike scoring five points in the final 13 seconds.

Slike also met his wife, Loma Rein ’53, at Dickinson and married her shortly after her graduation. “Some 67 years later I consider my greatest achievement in life convincing her to marry me,” he says. The two have been blessed with three daughters and five grandchildren.

After Dickinson, Slike’s relationship with Carlisle continued. He went on to pursue a law degree at the Dickinson Law School and graduated in 1954.

Because he had entered law school, Slike was deferred from the military, but upon graduation he was drafted and sent to Okinawa, Japan. When he made sufficient rank, he was joined there by his wife. Slike remembers streets filled with bicycles and 50 cent haircuts in Tokyo. In Okinawa, Slike was already beginning to employ his education by serving in the Judge Advocate General’s Corps. 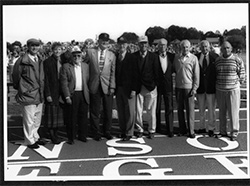 When he returned to the States, Slike completed a required clerkship at a Carlisle law firm before founding a practice with James Arnold ’51, who had been his roommate, both at Dickinson and in law school. Later, Slike affiliated with and served at the Camp Hill office of the Carlisle firm Saidis, Guido and Masland. (Interestingly, both Judge Edward Guido ’72 and Judge Albert Masland ’79, P’06 are Dickinson grads and mock trial coaches at the college.) Slike spent his years as a lawyer mostly in office practice, working with wills, deeds, adoptions and small businesses and getting involved in occasional court cases, both civil and criminal.

Now retired, Slike is more involved with his community and church in Camp Hill. His most recent community activity was on the board of the Camp Hill Lion Foundation, an organization that raises funds for community purposes, primarily to supplement what taxes don’t provide to schools. As a result, many new facilities for schools and camps have been funded, like a performing arts center in a nearby elementary school. Slike shares that working on these projects has brought him into contact with people a generation or two behind him, something he has found to be deeply rewarding.

For many years, members of the 1947-48 basketball team would gather for a reunion at the college, attend a game and reminisce about their days at Dickinson, but most members of the team are no longer with us. Ben James ’34, a former admissions director with an encyclopedic knowledge of prior students’ names; Richard “Mac” McAndrews, a coach and trainer for whom the McAndrews Fund for Athletics was named; and Chick Kennedy, the former basketball coach, are the staff members Slike stayed in close contact with and remembers most fondly.

“It was a good time. No regrets at Dickinson. Nor does my wife have any,” Slike notes. “We greatly enjoyed our time there.”