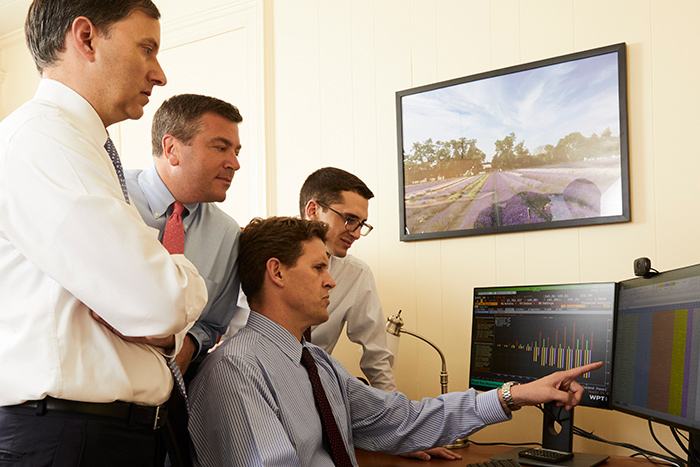 At first glance, high finance and sustainability seem to have little in common, but nine years ago, Bud Sturmak ’95 decided to take a deeper look. It began when he was a partner with RLP Wealth Advisors, and he first saw that a company’s financial success couldn’t be predicted by financial analysis alone.

“A light bulb went off when I saw that companies with great workplaces outperformed companies that weren’t regarded as good places to work,” he says of his first experience reading an academic study on environmental, social and governance (ESG) analysis, an emerging field focused on how nonfinancial factors can impact business performance.

The more he looked into ESG, the more Sturmak saw that issues like environmental stewardship, resource management, human capital and labor practices had a real, measurable effect on the bottom line. The problem was there weren’t many people paying attention.

“The evidence was out there,” says Sturmak. “I mean, undeniably, many of these ESG factors were proving to be financially material and affecting how companies perform, yet as recently as five years ago most of Wall Street was ignoring the information.”

For Sturmak, the ability to spot trends others were missing is a direct result of his Dickinson education. “Dickinson ingrained in me—and I think in many of my friends—this more worldly point of view where you have to understand that there are other perspectives and other ways of looking at things,” explains the former history major. “You learn that you shouldn’t just accept the status quo, and you learn how to ask the right questions. It was a four-year life experience that emphasized the importance of being curious.”

So when Sturmak began to think about launching a new investment firm, BlueSky Investment Management, which would focus on integrating financially material ESG factors into a global fundamental value equity strategy, naturally he wanted to get more Dickinsonians involved. To help with the analysis needed to determine if there was a solid connection between success and sustainability, he tapped Andrew Ford ’11, who’s now a research analyst with the firm.

“Dickinson’s focus on sustainability was ever present during my time there, and I think the college also prepared me to apply my quantitative background to any field,” says Ford, a former mathematics and economics double major who first started working with Sturmak on this research at RLP. “So when I was presented with the opportunity to use sustainability data to improve traditional financial analysis, it was a great way to merge my education and background with the values and ideals Dickinson is trying to foster in the world.”

Ford began to analyze a wide array of data to determine whether a company’s strong performance on ESG issues led to increased share performance, increased profitability, lower costs and increased return on equity. When he and Sturmak began to see evidence for a solid connection, they thought that with some deeper number crunching they could develop a powerful tool—a proprietary model to assess investment opportunities from an ESG perspective. For that, they turned to another Dickinsonian, Professor of International Business & Management Steve Erfle, who is now a partner with BlueSky.

“That’s one of the great things about Dickinson,” says Ford, who never took a class with Erfle but knew of his previous data-analysis work for the Seagram Classics Wine Company and the Pennsylvania Department of Health. “You really get to have close relationships with the faculty. So when you call them up out of the blue four years after you graduate, they are not only willing to listen to your idea but they’re willing to sign on and help improve it.”

Armed with Erfle’s model, which used hard data to make a business case for sustainability, Sturmak and his team penned a white paper, ESG and the Future of Investing, which made a compelling case for the firm’s vision. The research determined that though 85 percent of ESG data doesn’t add value to the investment process, the remaining 15 percent can add value and enhance returns. The key to the research was identifying the specific ESG factors that can add value, which vary from one industry and region to the next.

“I was heartened to see that there was a significant relationship between these ESG factors and investment returns, but I wasn’t entirely surprised,” says Erfle. “Once you get beyond short-term gains and look long term, it makes sense that these issues would enhance profits. What’s different today is we can finally get our hands on the data that demonstrates this.”

The white paper was key in recruiting seasoned portfolio managers Ron Dornau and Chris Matyszewski, who brought a combined 45 years of experience in fundamental value investing to Sturmak’s growing team. BlueSky publicly launched in October 2016, and following a successful first year, added Grant Cleghorn as partner and head of global marketing in November 2017. The firm is now a signatory of Principles for Responsible Investment, the world’s leading proponent of responsible investment strategies, and recently was featured as a case study in the Sustainability Accounting Standards Board’s (SASB) ESG Integration Insights, which promotes making sustainability concerns a core part of financial accounting.

“Historically, the idea of socially responsible investing repelled mainstream investors,” says Sturmak. “That’s because it was initially based on divestment. It was defined by what you’re not going to invest in, and that means you’re just shrinking the available investment universe—which means shrinking your opportunities to make money.” BlueSky, on the other hand, studies how factors like greenhouse-gas emissions, water usage, employee satisfaction, workplace diversity and corporate governance have historically had a positive effect on business performance. Then, instead of telling clients where not to put their money, BlueSky identifies attractively priced companies with solid fundamentals that are also sector leaders on financially material ESG factors.

“Rather than talking about this from an ethical standpoint, we need to make a business case for sustainability if you want to make this a mainstream movement,” says Sturmak. “Frankly, when I first started my career, I was a little reluctant to get into finance because I wasn’t sure if it aligned with my values, but I’ve realized that finance can be a powerful tool for the greater good.”

And as Sturmak continues to harness finance for the greater good through BlueSky, he intends to keep turning to Dickinsonians for help. He’s already brought fellow former history major Anastasia Pfarr Khoo ’97, CMO at Conservation International, on to BlueSky’s advisory board. The firm also has taken on several students as interns, and Sturmak plans to use more in the future because he believes the college’s mission-driven, liberal-arts approach is exactly what’s needed for this kind of work.

“My typical week at Dickinson was burying myself in a book, discussing it with my professors and classmates, and then analyzing the underlying facts and writing a paper discussing my conclusions,” he explains. “That kind of focus on analytical skills and writing and communicating clearly is exactly what’s needed to do this kind of work where you look at something in a whole new way.”