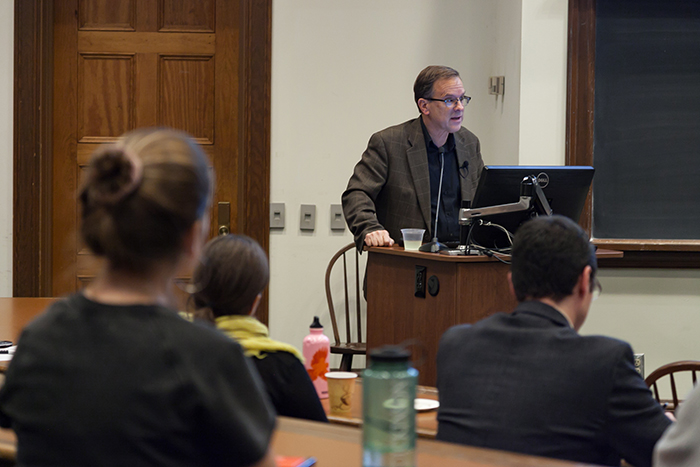 Soon after the crown prince of Saudi Arabia made international news, Professor of History David Commins delivered a public presentation that provided timely historical context to the balance of religious influence in modern Saudi society. A Benjamin Rush Chair in the Liberal Arts and Sciences, Commins is a leading scholar on Syria, the Gulf States and Islam. During the Whitfield Bell lecture on Nov. 15, he discussed the 1979 siege of Mecca that caused the Saudi government to lend support to a surge in religious conservatism.

The siege arrived in the wake of Saudi Arabia’s first oil boom—a time of exponential construction and Westernization. Hoping for a return to a simpler, nomadic life, and hearkening back to the purity of Islam’s early days, religious activist Juhayman al-Otaybi broke away from what he viewed as corrupting influences and established the ultraconservative Salafi Group. In the summer of 1979, Commins notes, the group had identified one of their members as a Muslim messiah, who they believed would lead them to a victorious battle. They set out to overtake the grand mosque in Mecca, site of the annual pilgrimage for Muslims, secure that they'd be victorious—group members had dreamed they would be.

In his lecture, Commins outlined the motivations leading up to the 1979 Salafi seizure of the grand mosque, which ended not with the rise of a Saudi Messiah, as the group foretold, but in the execution of 63 insurgents, including Juhayman. In the wake of that event, Commins says, the government decided it had adopted Westernization too fast, “and made a sharp turn toward enforcing strict religious morality at home.” The Saudi government also revamped foreign policies, in part because of the Iranian Revolution and Soviet invasion of Afghanistan. Some of those behind the more recent rise of the Islamic State were men influenced by Juhayman’s movement.

Commins’ lecture arrived during a contentious time in Saudi history—roughly two weeks after Saudi police arrested 11 princes, along with other citizens, at the direction of Mohammed bin Salman, crown prince, and his father, the king. Made in the name of anticorruption, the arrests are thought to have been orchestrated to secure the crown prince’s position of power during his father’s reign and to remove future challengers to the throne, in an effort to tip the scales of power in favor of the monarchy, and away from religious leaders.

Commins delivered the Whitfield Bell lecture at the invitation of the History Majors’ Committee, which presented the event in conjunction with the history department. Launched in 2010, this annual series honors Whitfield Bell Jr., Dickinson, class of 1935, a former trustee, author, history editor and Boyd Lee Spahr Chair of American History.