In Support of DREAMers 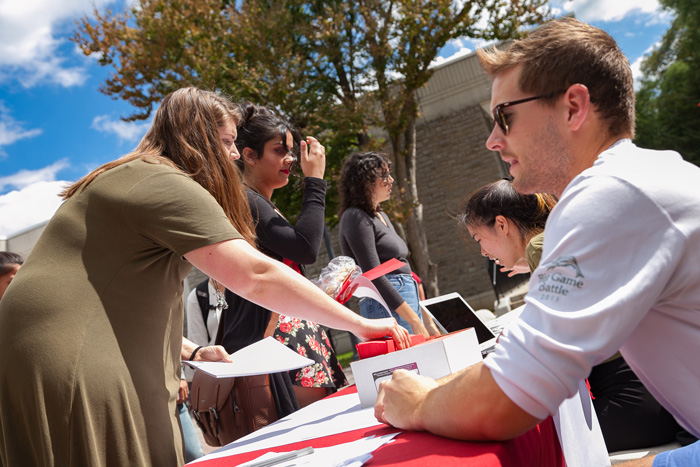 Dickinsonians recently gathered on Britton Plaza for a congressional letter-writing campaign to support DACA (Deferred Action for Childhood Arrivals). The effort resulted in nearly 100 letters written and sealed in red envelopes, with more than half going to Sen. Pat Toomey (R-PA) and Representative Lou Barletta (R-PA).

"As the daughter of Salvadoran immigrants, I am deeply aware of the many challenges faced by undocumented people living in the United States," said Janel Pineda ’18, one of the campaign's student organizers. "Hearing about the current administration’s decision to rescind DACA was heartbreaking, and it reminded me of my own responsibility and commitment to defend the rights of DREAMers and undocumented communities. As Dickinson students, our presence in higher education is a privilege in itself, and I believe that a crucial part of our civic engagement involves taking a stand to support undocumented youth."

The campaign grew out of an earlier show of support for DACA during which hundreds of Dickinson community members marched on Britton Plaza, led by the college's Student Liberation Movement. They circled the college seal and stood in solidarity as some spoke, shared stories and urged the campus community to take action.

"Supporting DACA and the DREAMers is important because it’s a human rights issue and a social justice issue," said Jacqueline Amezcua ’19, another of the campaign's student organizers. "Too often immigrant populations are silenced because of their undocumented existence. As Dickinsonians we need to come together and use our privilege to benefit others. On Friday, September 8, 2017 we came together to write letters to our state representatives. ... Joining a protest is only half of the work, using our privilege to benefit those who lack it is just as crucial. Dickinsonians came together in support of DACA and dreamers because we all know that no human being is illegal and every voice matters."