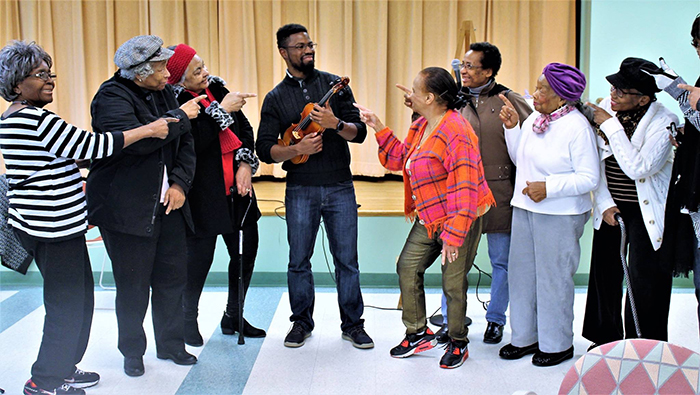 Alexander Strachan '13 poses with a few audience members. “I like this photo, because it reflects the fun we had," he says. “I played familiar music, and the seniors sang along and clapped their hands."

Alexander Strachan ’13 arrives at the venue, violin and orange music folder in hand. Most audience members are old enough to remember World War II, so he’ll start with patriotic tunes. If their energy’s low, he’ll try a jaunty singalong, and if there’s a whiff of anxiety in the air, he’ll take it down a notch or two—maybe “Somewhere Over the Rainbow” slowed down a bit, and without the jarringly high notes. It’s not the sort of performance you’d expect from a classically trained violinist, but as the nursing home residents begin to smile, clap and sing along, he knows he’s doing some good.

Strachan’s business, Healing Strings Studio, brings therapeutic music to clients in nursing homes, hospices, hospital oncology wards, daycare centers, prisons and other nontraditional venues. He’s developed a repertoire of soothing and rallying tunes, and as he performs, he observes the audience closely, tailoring his program and playing style to complement their tastes and moods.

Strachan began music lessons at age 10, choosing violin, he says, because his mom wouldn’t green-light the drums. He grew to love the instrument, and after researching colleges, universities and conservatories, he decided to attend Dickinson after meeting Associate Professor of Music Blanka Bednarz, a fellow violinist. During his sophomore year, he and Bednarz performed together during a two-week tour of Poland with Sinfonietta Polonia, the country’s national orchestra.

A longtime volunteer who joined the CommServ program Dickinson Friends and assisted with orchestra rehearsals at local schools, Strachan wanted to meld his love of playing music with his desire to help others, and he considered a career in music therapy. An experience with his grandmother, an Alzheimer’s patient, helped lead him to a different path.

Strachan’s grandmother had been showing signs of Alzheimer’s while he was in high school. She also was mourning the loss of her husband, and had become deeply depressed. Remembering happy childhood memories of playing violin to his grandmother’s piano accompaniment, Strachan learned some of his grandmother’s hymns and visited her one day with his violin. “She was frustrated, because she couldn’t remember how to play all of the notes [on the piano], but she could still sing along,” he remembers. “And when I played ‘Amazing Grace,’ she began to laugh and smile.”

Strachan continued to study music performance, with a plan to funnel that classical training into performances that could comfort and promote wellness. After graduation, he traveled to Japan to play in churches, hospitals, universities, retirement homes, mental health clinics, reformatories and other institutions through an international missions program—an experience that also allowed him to dust off his foreign-language skills. The trip included a performance of traditional Japanese music for survivors of the 2011 Tōhoku earthquake and tsunami.

The 2013 grad is currently serving an internship through the Music for Healing and Tradition program, and he’s now at the apprentice level. Instead of leading hands-on therapeutic exercises and activities, as a music therapist might, he assesses audience needs through prior interviews with caretakers and/or loved ones and uses his intensive training in music performance to present concerts that help his listeners experience a sense of joy, calm and peace.

As owner of Healing Strings Studio, Strachan performs roughly four to eight times a month at hospitals and hospices. He also gives private lessons, studies under a National Symphony Orchestra violinist, volunteers with his church and works as a personal trainer and as coordinator for the Coalition for African Americans in the Performing Arts’ Sing for Seniors program. He recently delivered a performance for veterans at the Walter Reed Medical Center and for patients at the Bowie Center in Bowie, Md., and he's written about his experiences with hospices and at jails for a major violin blog.

Strachan is always on the lookout for standards and singalongs he can add to his rotation, like "Summertime" and "Take Me Out to the Ballgame"—Google and television commercials provide inspiration. He also knows quite a few children’s tunes, which he plays in daycare centers and children’s wards, and energizing pop songs, which play well for his performances at the gym. It's a departure from the pieces he performed as a music major. No matter. Strachan believes that there’s a time to shine and a time to bring out the shine in others, so he selects the music that will speak to his listeners, comfort them and enliven them, not music that impresses. And if previously agitated audience members relax and doze off during a performance, that’s a very good thing.

His classical training only enhances the experience for everyone, he says.

“I want to play my best, because the better skilled I am, the better I’ll be able to reach people,” he says. “And I want to inspire others to recognize that if you play a musical instrument, there are opportunities out there to help others through your music.”