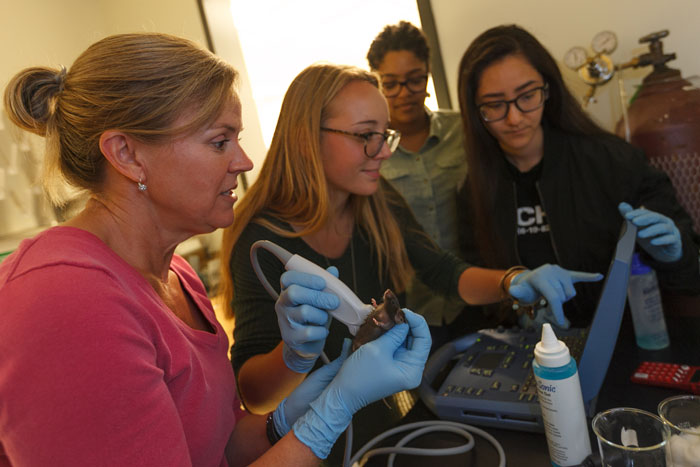 Sudden infant death syndrome (SIDS) is the leading cause of death among babies between 1 month and 1 year old, but understanding how brain development contributes to the condition could change that. To help tackle that challenge, three student researchers recently teamed with Associate Professor of Biology Missy Niblock on some complex neurological research that undergraduates rarely get to do—and that could have implications reaching far beyond the lab.

“The goal of our work is to understand the timing of the functional development of the neural circuit that increases respiration when blood carbon dioxide levels become elevated,” explains Niblock. “The idea is that SIDS infants die because they are in a vulnerable developmental period, have an underlying risk and encounter a stressful situation—for example, rebreathing exhaled CO2 due to bedding over the face or sleeping in the prone position.”

Niblock notes that a leading theory on SIDS death points to a failure in a function called the central chemoreflex. This modulation of breathing in response to changes in blood gases, such as an increase in CO2, helps the body get rid of unwanted gases. She emphasizes that the modulation has to be fully functional at the moment of birth to maintain homeostasis, and it often doesn't function well in premature babies, so understanding the timing of its development is important.

Research suggests that victims are born with brain abnormalities or defects that affect signaling between nerves tied to the central chemoreflex. So, for one of the experimental approaches, using mice as human stand-ins, Niblock and her students exposed a pregnant mouse to 10 percent carbon dioxide (i.e., a high dose) for an hour and then examined the mouse’s embryos, at embryonic day 15.5. This way they can determine if the embryonic mice can up-regulate a protein called c-fos in specific areas of the brain and at certain embryonic ages, which would tell them if these specific areas are active or not in response to the mother’s intake of carbon dioxide.

“The novel aspect is that no one knows when the cells in a living embryo become able to respond to carbon dioxide,” explains Madison Parks ’17 (neuroscience). “Our model is uniquely suited for this type of study—previous studies have examined the activation of the cells using electrophysiological approaches in brain slices taken from embryonic mice or rats, but no one has examined the cells' activation in vivo.”

In those in vivo studies, the students observed embryonic mice with a genetic modification that allowed the students to identify the cells that responded to CO2 using a blue stain. 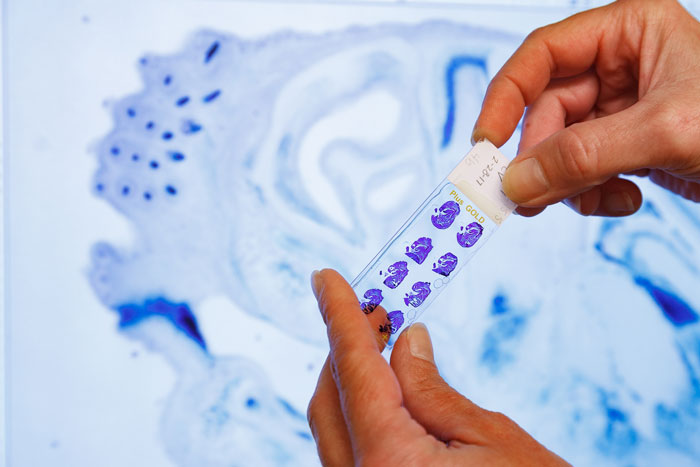 Students observed if certain parts of the mouse's embryos’ brains lit up blue, meaning they were activated by the carbon dioxide exposure. Photo by Carl Socolow '77.

“We saw activation as early as embryonic day 15,” says Parks, who led the experiments, accompanied by Natalie Cao '17 (neuroscience) and Justine Hayward (biology) '18. “But we also saw a relatively small number of blue cells in our control condition—not exposed to carbon dioxide—at this age as well, so we’d need to do some follow up work to confirm our finding.”

That follow-up will resume in the fall, and Hayward will be back in the lab, where she’ll be expanding the work to examine differences in response in male and female mice. Cao moved back to California after graduation, where she’s working in a cardiac clinic. She had never worked in a lab project quite like this one, and despite its uniqueness, she found that it was representative of the overall Dickinson experience.

“Working in this lab has really opened my eyes to a lot of potential research that could be very useful in the future,” she says. “I have a lot of friends who go to big research universities back in California, and they never do this. They're always working with the grad students and never with their professors. And there are even other professors working on this with us, like Professor [of Biology Chuck] Zwemer and [Associate Professor of Biology Scott] Boback, so it's really like a group effort. It’s true to our collaborative environment at Dickinson.”