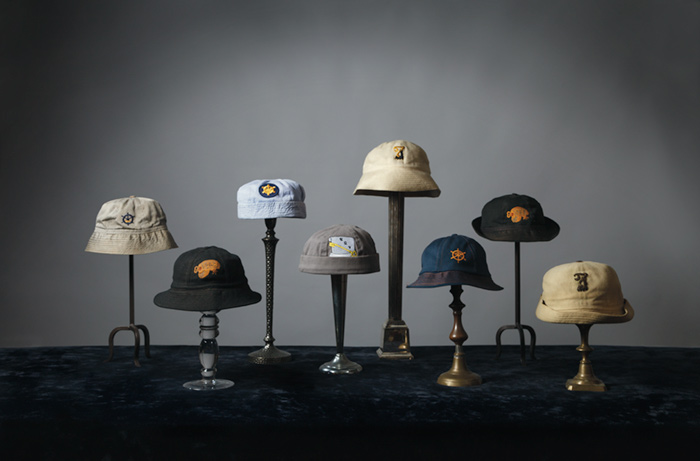 A collection of hats provided by the Dickinson College Archives. Photo by Carl Socolow ’77.

Each spring at Dickinson brings members of the community together for a series of distinctive “tapping” ceremonies, during which new members are inducted into the college’s honorary societies—known as “hat societies” due to their distinguishing white, blue and gray hats—Raven’s Claw, Wheel and Chain and the Order of Scroll and Key. An additional society, Skull and Key (designated by black hats) is no longer active on campus but has an active alumni association.

The hat societies are steeped in tradition and, occasionally, secrecy. New members of the three groups are selected each year primarily on the basis of academics and campus leadership, and these students, though small in numbers, make significant contributions to the college and local community. Alumni remain steadfastly dedicated to their societies, often returning to campus for tappings, mentoring new members, celebrating society milestones, giving back to the college through special scholarship funds and maintaining strong connections with their hat-mates.

From interviews with more than a dozen hat society alumni members from several decades and some archival research, here is a glimpse into this distinctively Dickinson tradition. (And view additional web-exclusive content below the original print content.) 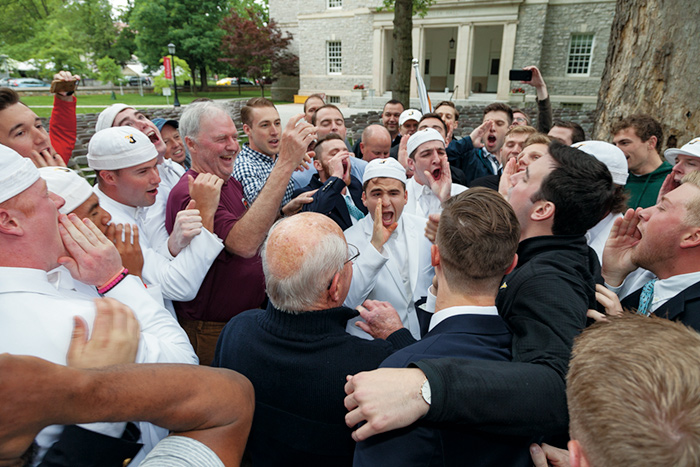 Founded in 1896, Raven’s Claw is Dickinson’s oldest men’s honorary society that, each year, taps seven rising seniors for membership. Through their involvement with the society, members provide positive leadership on campus, become involved in service projects and participate in alumni networking events.

A historical ledger stored in the college’s Archives & Special Collections contains the signature of every member dating back to the founders. The names of many White Hats grace campus buildings, such as Boyd Lee Spahr, class of 1900, and Robert M. Waidner ’32, of the Waidner-Spahr Library. John “Jack” R. Stafford ’59 and his wife, Inge Paul Stafford ’58 (Wheel and Chain), helped transform the college through Inge’s service on the Board of Trustees and their financial generosity, including a scholarship, an endowed chair in bioinformatics, a teaching laboratory in Dana Hall, the Stafford Reading Room in the library and the Stafford Greenhouse for Teaching and Research.

In the 1990s, Raven’s Claw members founded two generous funds, the Raven’s Claw Scholarship, which bestows an annual award on a rising male or female senior with demonstrated academic achievement and campus leadership (read more at dson.co/rcscholarship), and the McAndrew’s Fund for Athletics, which supports Dickinson’s athletics programs in myriad ways.

“The selection process for the next group is one of the primary tasks of the current group. Each senior group devotes lots of time and energy to this process. Each group tries to leave it better than you found it and hope to continue the tradition by selecting a motivated and thoughtful group to carry on the following year.” –Dave Webster ’88 (Raven's Claw) 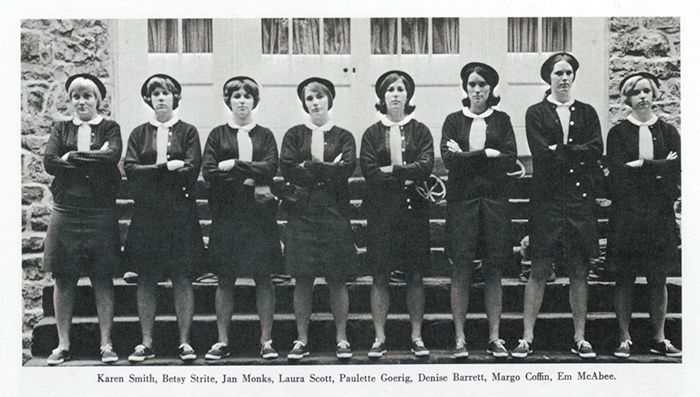 Founded in 1924, Wheel and Chain, the women’s society known as the Blue Hats, inducts 10 new members from the rising senior class each year, chosen by the previous year’s inductees. Their tapping takes place on Old West’s old stone steps, and the new class rings the bell in Denny Hall during Commencement ceremonies.

A very diverse group, the Blue Hats are selected for displaying leadership and character in campus activities and for service to the college and community. Members originally hosted a tea for incoming students and their parents, participated in first-year orientation and served as ushers at campus events. In 1965, they began tapping honorary members, starting with Dean of Women Barbara Wishmeyer. Since then more than 100 honorary members (faculty, administrators and alumnae) have joined Wheel and Chain.

Notable members of Wheel and Chain include Ann Conser Curley ’63, a journalist and former president of Dickinson’s Alumni Council who co-established multiple faculty chairs at Dickinson (along with husband John Curley ’60); Louise Hauer Greenberg ’54, trustee emerita who led a long career combining research and music; and Barb Stauch Slusher ’86, P’16,  director of the NeuroTranslational Drug Discovery Program at the Johns Hopkins School of Medicine’s Brain Science Institute and a professor of neurology, medicine, psychiatry and neuroscience at Hopkins’ School of Medicine.

For its 75th anniversary in 1998, the group endowed the Wheel and Chain Leadership Award, which is a scholarship given annually to an outstanding rising junior who maintains a high GPA and demonstrates the characteristics of a great leader.

Fun fact: The Blue Hats weren’t always blue—during the World War II era, blue dye was considered essential to the war effort, so several iterations of the hats were produced in gray.

“The people in Wheel and Chain were accomplished Dickinsonian senior women who had given a lot of themselves to the school during their time on campus. And there were some members who were faculty and administration too. Impressive!” —Carol Graebner '75 (Wheel and Chain) 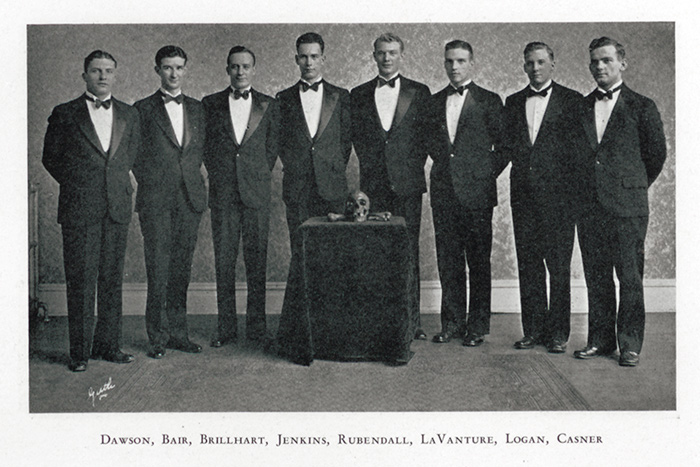 Skull and Key was a junior men’s honorary society established in 1908 to help foster communication between fraternities and the college community and to promote campus customs and spirit. (The Black Hats pre-dated the InterFraternity Council, which is responsible for continuing to foster these relationships.) There was one member from each fraternity, and they had specific tasks including organizing first-year orientation, supervising rush activities and escorting female students to school dances. Tapped during the spring, they also chose an outstanding first-year male student.

Because Skull and Key was a junior organization, members were eligible to join Raven’s Claw in their senior year, and well over 100 Dickinsonians hold the distinction of representing both groups, including Mr. Dickinson himself, Ben James ’34.

In the 1960s, after most of its official duties were reassigned to the InterFraternity Council, the group maintained more of a social presence while still contributing to fraternity events. The Black Hats experienced some disciplinary issues in the ’70s, and the group was suspended and then officially disbanded in the fall of 1983.

In 2001, Black Hat alumni formed the Skull and Key Alumni Club to rebuild the society’s connection to the college. A commemorative plaque was unveiled along Dickinson Walk, and the Skull and Key Scholarship, which is awarded to a rising junior student based on leadership, service and campus involvement, was announced. There was also a 100th anniversary reunion dinner, and there is a festive gathering each year at Alumni Weekend. Black Hat members retain their enduring bond of fellowship and still enjoy regional get-togethers. They also maintain a website with a comprehensive overview of their history featuring Microcosm pictures and Dickinsonian articles at skullandkey.org.

“Being tapped to become a Black Hat was a real honor since it sort of cut across the fraternity lines at a time when Dickinson’s men’s fraternities provided most of the social life on campus. Individual Black Hats had a range of profiles but becoming one added a social dimension new to most members and it became a fun way to take a break from academic, sports and other activities. It also instilled a pride in Dickinson traditions.”  —Al Miller ’63 (Skull and Key)

The Order of Scroll and Key (Gray Hats) 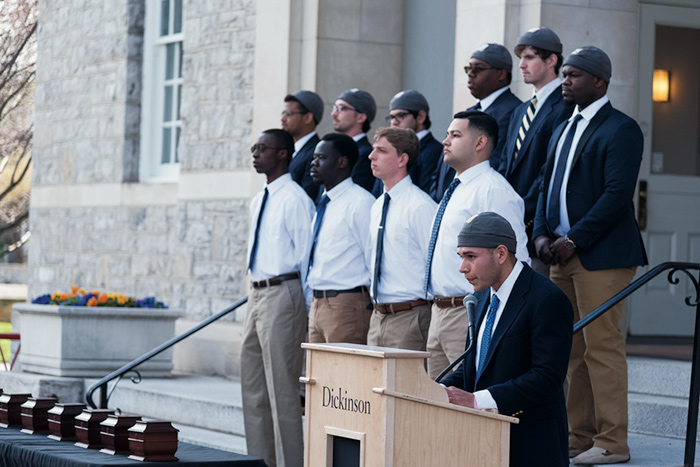 The Order of Scroll and Key was established in fall 2001 to restore a third hat society (in place of Skull and Key, which was disbanded in 1983) with a mission of diversity and dedication to philanthropy and volunteerism in the Dickinson and Carlisle communities. Its membership includes fraternity presidents, college advisors and community-service leaders. Additionally, the Gray Hats (also known as the Scrollmen) followed the example set by Wheel and Chain and chose honorary members, including well-regarded faculty members and administrators.

Alumni of the Order of Scroll and Key are making their presence felt in critical ways, from federal service to international business and finance to notable philanthropic efforts, while remaining committed to their organization’s founding principle (and the motto of John Dickinson himself) that in all of their endeavors, they have a lifelong requirement “to be rather than to seem.”

“Despite the passage of time, Scroll and Key remains today the same group which at our founding made no distinction regarding race, orientation, affiliation, legacy or creed. We care collectively today, as we did then about one thing—a notion complex in its simplicity—that the men who wear this hat, who carry our key, will act in their quietest most private moments with humanity and humility. That they, when no one else is looking, will reach out a hand to their brothers and sisters in need and in so doing share a light of kindness that is so often lost in this world.” —Chris Roberts ’02 (Scroll and Key) 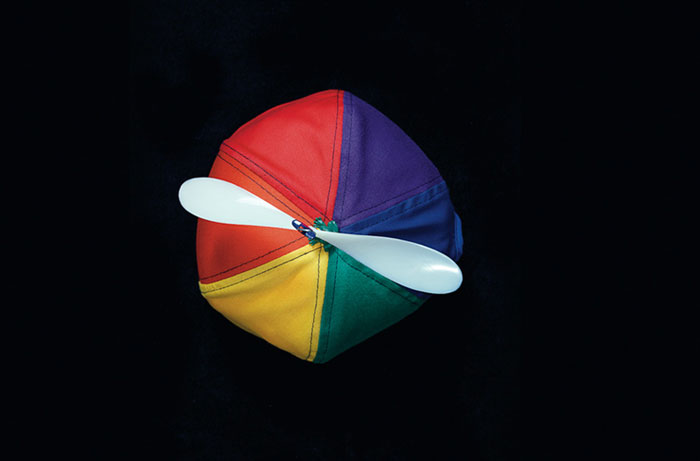 In 2008, the Queer Caps were established to encourage visibility of queer activists on campus. At the time, many students felt there wasn’t enough visibility of, and recognition for, the value of queer programming. The founders described the students selected as individuals who advocated for queer rights and consistently worked to make positive change. Each spring, new members are tapped during a ceremony on Old West’s old stone steps, and members don distinctive rainbow-colored hats.

“I would not be able to take part in this organization or be able to do all that I've done on campus without the work and activism of the Queer Caps and those that came before me. And I am very confident in the next group that has been inducted. I can't wait to see what they'll do with the organization, and it is so comforting to know that my legacy is in capable hands.” —Liam Fuller ’17 (Queer Caps)

Members of Dickinson's hat societies have made a major impact, on campus and off. the following lists provide some example of the connections they've established, their lingering presence on campus, their family connections and beyond. We know this list does not capture everything! Email dsonmag@dickinson.edu if you have something to add.