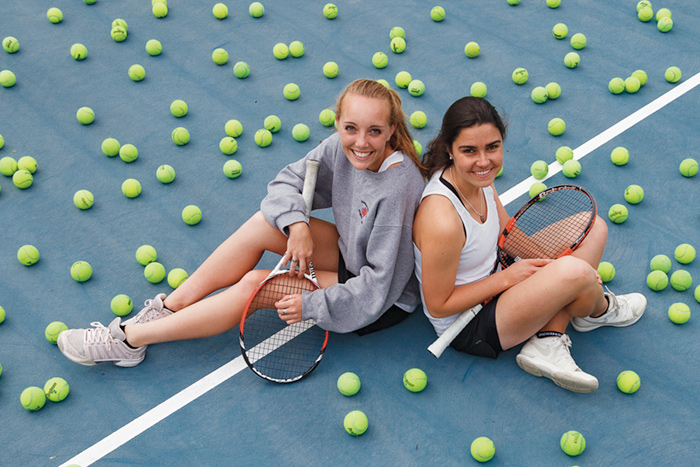 Madison Parks ’17 and Joana Nunes ’17 have a “sixth sense-like communication” while on the court, according to Head Women’s Tennis Coach David Bojalad. “One always knows where the other is positioned and which way they will move even before the play develops,” he says. Never having seen a tighter bond between players, he credits their dynamic for much of their success. “You cannot teach this,” he says.

As doubles partners, Parks and Nunes spent several years improving their game alongside one another. “I developed my doubles game a lot through Dickinson tennis and partnered with Madison from my sophomore season onward,” says Nunes. “We had some very memorable matches, including beating Swarthmore and Franklin & Marshall during my junior season.”

Parks recalls the same match against F&M as being her most memorable as a Red Devil. “Joana and I had previously beaten the team we were playing in doubles in the regular season, but it was such an intense match during the playoffs, we were fighting for every point,” she says. “I am so lucky to  have been able to play side by side with one of my best friends for four years.”

In 2015-16, the duo earned Parks her third All-Centennial Conference (CC) honor with a secondteam selection, and Nunes earned a second-team selection in both singles and doubles as well as the CC Women’s Tennis Scholar-Athlete of the Year. Nunes went 12-6 on the year in singles, with a 7-2 mark in conference play. She finished the regular season with seven consecutive wins, and with the Red Devil’s first-round victory in the conference playoffs, extended the streak to eight. Parks finished the year 10-5 overall in singles and 6-4 in conference matches. Parks and Nunes finished the season with an 8-2 run in doubles, winning five straight during that stretch. And they aced the role of co-captains in their senior year.

Off the court, Parks and Nunes’ intense attitudes carried into their lives as students. “They are the epitome of the student-athlete at Dickinson,” says Bojalad. “They go all out in both athletics and academics and are committed to both equally.”

During graduation weekend, Nunes’ commitment to academics was recognized when she won the Lloyd W. Hughes Senior Scholar-Athlete Award, was inducted into the Phi Beta Kappa honor society and earned the James Fowler Rusling Prize.

Nunes, an economics major and mathematics minor, credits Dickinson for shaping the journey that led her to her postgraduation plans. When she was searching for internships junior year, the Career Center connected her with an alumnus from Deutsche Bank who helped her acquire an internship there last summer. Since graduating, she has returned to Deutsche Bank in New York City to work in their Global Transaction Banking department.

In addition to playing tennis, Parks majored in neuroscience and completed an independent research project titled “Functional Development of Central Chemo-receptors, Onset of Fetal Breathing Movements and C-fos Expression in Embryonic Mice.” She similarly credits Dickinson for giving her this opportunity and fostering her competitive spirit, both of which prepared her for the application process that earned her a position as a research assistant at Mount Sinai Medical Center in Manhattan, where she is studying genome similarities in patients with Parkinson’s and Alzheimer’s diseases.

“Dickinson has really been incredible in helping me to achieve my goals,” Parks says. “It is possible to be involved in so many different areas, really tailoring your experience to exactly what you want, and I honestly could not be happier with my experience.”