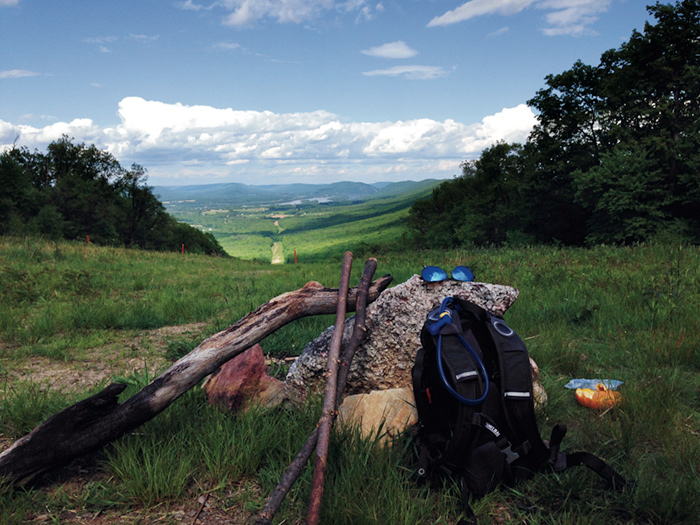 Extending from Georgia to Maine, the Appalachian Trail spans 2,190 miles, with several of those miles meandering right through Carlisle. The local stretch includes the trail’s midpoint, located in nearby Boiling Springs, and 13 consecutive miles considered the lowest and flattest section of the entire trail, making it great for day trips.

Students, faculty and staff alike frequently step outside of Dickinson’s limestone walls and drive or bike the short distance from campus to the trail, whether with the Outing Club, through a physical education (PE) class called Appalachian Trail Hiking or with friends. 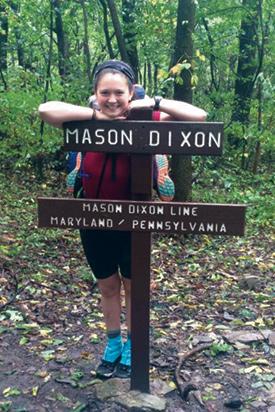 “[The trail] is very convenient to campus at several points as it winds through the Cumberland Valley,” says Head Softball Coach Matt Richwine. One of the instructors for the PE class, Richwine says the group targets a different section of the trail each week, typically hiking areas within 30 minutes of campus.

The Outing Club similarly uses the 30-minute guideline to choose its trails. “[The Appalachian Trail is] a resource that we value greatly and are fortunate to have close to campus,” says Jared Markovsky ’18, a member of the club. As someone who grew up hiking the Appalachian Trail in New  Hampshire, Markovsky says having a section of the trail near Dickinson was an added bonus. “Even though I was going to a new section of the country [for college], it felt like an old friend would always be close.”

For recent grad Caitlin Doak ’16 (pictured, at right), who hails from Illinois, being close to places to hike was also a factor she considered when deciding to attend Dickinson. After taking advantage of the proximity as a student, Doak hiked the entire trail after graduation. “I think going to Dickinson made me feel more confident in hiking the Appalachian Trail later,” she says. “It was really exciting when I finally got to the Pennsylvania section and hiked the parts I had already done in gym class and with the Outing Club.”

And while hiking with Dickinson programs guarantees spending time with other students, Doak wasn’t expecting to run into any Dickinsonians while hiking the trail as an alum, but she saw four alumni belonging to graduating classes spanning 20 years.

The Appalachian Trail sees 3 million visitors each year, and some of those are definitely Dickinsonians. Next time you’re in the Cumberland Valley, grab your hiking shoes and hit the trail—you never know who you’ll meet while you’re out there.