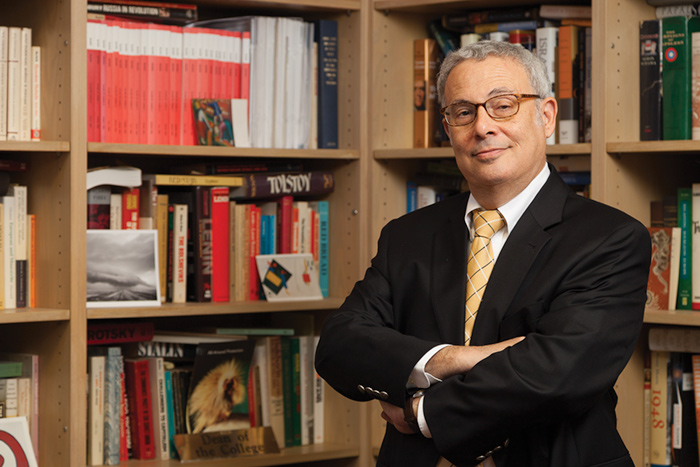 by Neil B. Weissman, provost and dean (and former interim president)

As I neared the close of my year as Dickinson’s interim president, I looked forward to a memorable Commencement weekend. It did not disappoint. From Friday’s senior toast through Sunday’s graduation ceremony, the class of 2017, families, friends and the entire Dickinson community enjoyed a near perfect celebration. It also struck me as a very Dickinson celebration. More than the standard elements one would expect at any college graduation, ours very much embodied many of Dickinson’s distinctive dimensions.

The college’s commitment to global education was certainly in evidence. More than half of the graduating seniors wore patches on their gowns displaying one of the flags of the 28 countries in which they had studied abroad. (Some students had several patches!) These students represented academic majors from across the curriculum, including nearly half of those receiving Bachelor of Science degrees. Similarly, some 40 percent of the seniors graduated with interdisciplinary majors. Forty-six of them had completed one of our relatively new interdisciplinary certificate programs.

Dickinson’s commitment to sustainability was clear in the awarding of the Sam Rose ’58 and Julie Walters Prize at Dickinson College for Global Environmental Activism to Brett Jenks, CEO of Rare, an organization supporting local conservation efforts across the globe. Jenks’ announcement that the prize would be devoted to developing a new program to educate local activists resonated well with Dickinson’s own vision of sustainability education as a combination of learning and action. More than 90 percent of the seniors had taken at least one sustainability related course. Based in part on this high rate, one such course is now a requirement for graduation.

The weekend also highlighted Dickinson’s close relationship with the military, a relationship unmatched among liberal-arts colleges. Nine cadets of our Blue Mountain Battalion were commissioned into the United States Army. Indicatively, the commissioning officer was one of our own—Brigadier General Laura Anibal Potter ’89, the first female Dickinson ROTC graduate to achieve general’s rank. She stayed with us through Sunday to help hood our Commencement speaker, retired Admiral James Stavridis, former NATO commander. Potter had served under Stavridis during his tenure at NATO.

The college’s deep commitment to our own community was equally obvious. Honorary degree recipients this year included James Gerlach ’77, former Republican Congressman and current president and CEO of the Business-Industry Political Action Committee (BIPAC). And, following our current tradition, the baccalaureate keynote address was delivered by Frank James ’79, member of the Board of Trustees and noted media strategist and former journalist. His remarks, appropriately, centered on events at his own graduation. The family commitment, in this case quite literally, also characterized the class of 2017. Fifty-one seniors—nearly 10 percent of the graduates—were relatives of Dickinson employees or alumni.

Perhaps most importantly, Stavridis’ well-received Commencement address connected powerfully to Dickinson’s mission. His central theme was a call to service—not only in the military but across all careers from teaching and health care to business and science. The theme, of course, evoked Benjamin Rush’s founding vision of Dickinson as a college that would educate leaders for the new American democracy. The same is true of the service in support of the elderly led by honorary degree recipient Lisa Marsh Ryerson, president of the AARP Foundation.

Lastly, even the weather was typically Dickinson. Let’s call it “limestone weather”—days in which the skies reflect the gray of the college’s buildings and create a uniform, cool beauty that is a good omen for Dickinsonians.

Commencement weekend demonstrated that the college has finished its transition year with continued momentum and in a strong position looking forward. We greet our new president, Margee Ensign, with great enthusiasm for what is to come.