And the Crowd Goes Wild! 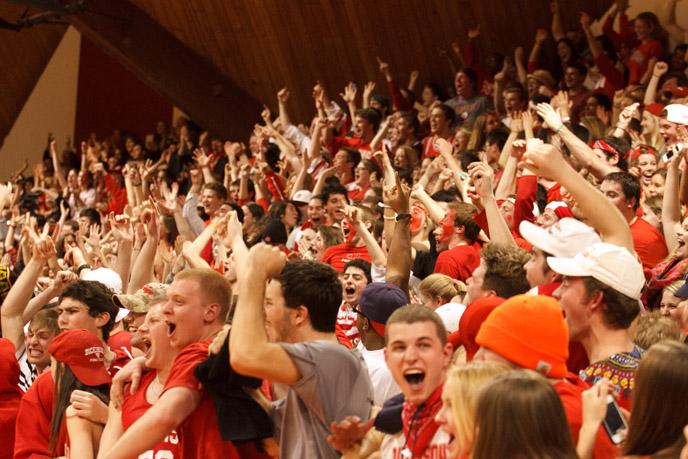 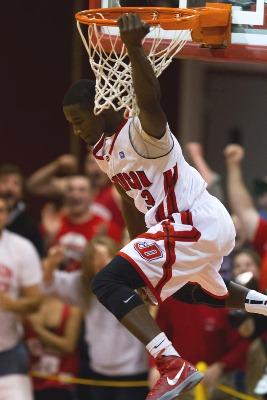 There was no buzzer-beater to seal the Red Devil victory. No drama at the foul line with only a second left on the clock. In fact, the Devils made their first seven shots of the game, took an early double-digit lead and never looked back, going on to defeat the Marietta Pioneers 80-65 in the first round of the NCAA Division III Tournament.

But there was certainly no shortage of excitement in this historic victory, which was encapsulated in the acrobatics of Chris Cox '15, who had two monster dunks that ignited the crowd.

"Students are always telling me that they want to see some type of dunk when they come to our games," says Cox, who went on to score 8 points with 2 steals and 2 assists. "I'm glad that I could satisfy them on a big stage. But the dunks were just a microcosm of the team's performance. We owe our success to the team's work ethic and dedication and also to the alumni who have paved the way for us."

The win represents the first time in Dickinson basketball history that the team successfully navigated the first round of the NCAAs, and it sets the Devils up for a second-round showdown against the College of Wooster in Wooster, Ohio, on March 9. (If you can't make it to Wooster for the game, watch the live stream at the Dickinson Athletics home page.)

Guard Adam Honig '14 controlled the game throughout, along the way scoring both his 1,000th career point and a game-high 32 points, sinking 5 of 7 three-pointers and going 12 of 15 from the floor.

"Hitting 1,000 points in front of a sell-out crowd like that at home really was something special," Honig says. "And Chris' dunks—they were unbelievable. Any time he gets out in the open court, we know something good is going to happen. Whenever he throws down, that gives our team a ton of momentum and gets our fans into the game."

"I owe a big part of the transition buckets to Adam," Cox says of his teammate. "I fed off of his energy as soon as the second half started. He really got the team going."

With victory in hand as time wound down, officials asked the student spectators to wait to storm the court—a tradition with a long history in NCAA basketball—until the players had shaken hands with the Marietta squad. With that ensured, after the final buzzer sounded, the teams shook hands and Marietta exited the floor, leaving the Dickinson team at center court.

Security then gave the crowd the sign, and a jubilant red wave of fans swept onto the court in a display perhaps unrivaled in Red Devils athletics history. (The jubilation never overcoming common sense, the moment was highlighted by CBS Sports as an example of good sportsmanship.)

"I couldn't have asked for a better night," says Honig. "Between our performance and the atmosphere, it was really special."

Cox couldn't agree more, and he's not looking for the magic to wear off anytime soon. "To be able to give the crowd and the home fans what they wanted was a tremendous feeling," he says. "God has blessed us with another guaranteed game, so the sky is the limit in all of our eyes."