An Embodiment of Values 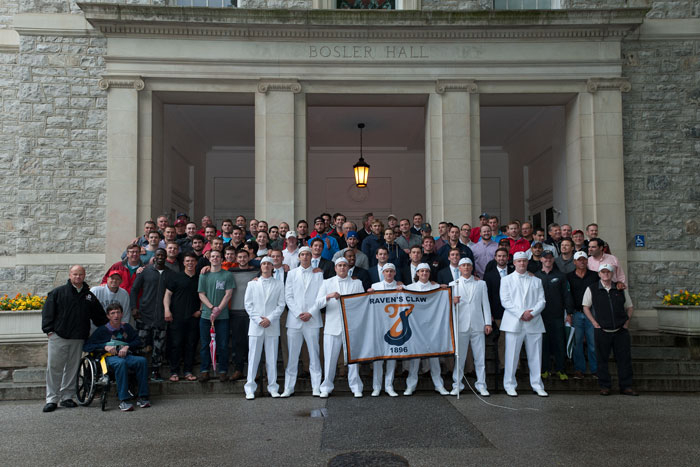 In May 2016, Raven's Claw alumni gathered to celebrate the newest members of the senior men's leadership society. Photo by Heather Shelley.

When the men of Raven’s Claw decided to establish a scholarship fund in 1993, they had the goal of helping a few students per year pay for college. What they did not know was just how successful the scholarship fund would turn out to be. In the years since the initial $200,000 was presented, the fund has raised nearly a half million dollars to support deserving students.

Raven’s Claw, a senior men’s leadership society, was founded in 1896. Each year, the society chooses seven men based on their leadership qualities and their ability to positively impact campus culture. Through their involvement with the society, members provide positive leadership on campus, become involved in service projects and participating in alumni networking events, says Dave Webster ’88, society advisor, associate athletic director and head men's lacrosse coach. Focusing on its goal of helping others, the society created the scholarship as a strategic way for leaders to help other leaders while simultaneously leaving their mark on the campus community.

According to a letter written by Paul Strickler ’51, a Raven’s Claw alumnus involved with the creation and presentation of the first scholarship, the criteria for potential recipients includes several different elements: The student must be a rising senior, as the scholarship is effective only for senior year, must demonstrate need, possess a GPA at or above college average and participate in campus activities and leadership. Although the society is made up of only male members, scholarship recipients can be either male or female as long as they meet the above criteria.

After reviewing students who fit these criteria, the college provides a list of five or six candidates for the scholarship to a committee made up of three Raven’s Claw alumni, one active Raven’s Claw member and a member of the college administration. Often, candidates do not know that they are even being considered for the scholarship until they have received it, as was the case with both Matt Hillsberg ’13 and Rachael Smith ’16.

“Receiving the scholarship was an honor,” says Hillsberg. “To learn that I was even considered was a surprise! Knowing that the positive work I was doing around campus was meaningful and recognized was empowering.”

In addition to having work around campus recognized by the scholarship, recipients have noted that receiving the scholarship opened the door to new opportunities.

“The scholarship meant more opportunity, since receiving it reduced my student loan amount, giving me more freedom in my path after graduation,” says Smith. “Scholarships in general are the only reason I was able to go to college, so this is one part of what helped me achieve my degree.”

Similarly, Hillsberg notes that the scholarship lessened the burden on his family, allowing him to take out less money in loans and giving him more long-term help. “[Scholarships are] so crucial for students who are enriching the community but may have difficult financial situations at home,” he says.

If Smith and Hillsberg could say one thing to the donors that contributed to their Raven’s Claw scholarships, they unanimously agreed it would be “thank you,” and Hillsberg invites future recipients of the scholarship to reach out and do the same.

“I hope this only encourages [future recipients] to be the best they can be during their last year at Dickinson. Reach out to the campus representative and get to know the organization that helped you. Saying thank you to the committee and donors can be done in many ways,” he says. “In these tough times, it’s so crucial that good work is encouraged and funded to make the community, and the world, a better place. The Raven’s Claw Scholarship is truly an embodiment of Dickinson values.”