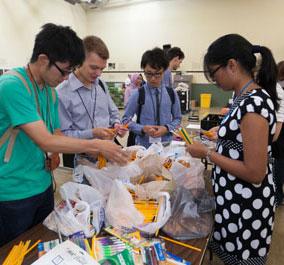 The Fulbright Gateway Orientation, sponsored by the U.S. Department of State, Bureau of Educational and Cultural Affairs, helps newly arrived first-year Fulbright students maximize their exchange experiences in the United States. Programs are designed to ease the adjustment to life in a new country and position the Fulbrighters for success.

According to Department of State program officer Mark Howard, the orientation is an intregal part of the Fulbright-student experience, particularly in light of the relationships the Fulbrighters forge in their first days in a new host country—and the insights these relationships bring.

"We like to say that the program 'puts faces to nations,' " he says. "Many of these Fulbrighters have never before visited the United States, or even traveled outside of their home countries. They'll never read a newspaper or view online news or TV news in the same way again, now that they've made friends from countries around the world."

The 65 students who attended this orientation at Dickinson took part in workshops on professional development, culture shock,  health and wellness and related topics. The five-day event also included a networking dinner with community leaders, cultural tours of local historical sites and a volunteer opportunity at

Project S.H.A.R.E., a local nonprofit that provides food, clothing and nutritional education to people in need.

Howard notes that Dickinson's multicultural campus and the strength of its global programming mark the college as an ideal setting for these experiences, as does Dickinson's home in "small-town Americana" Carlisle.

"For these Fulbrighters, Carlisle is the first face of the United States that they have seen. And I can't think of a better face to put forward," he says.

Read The Sentinel's article about the Fulbrighters' experiences at Project S.H.A.R.E.