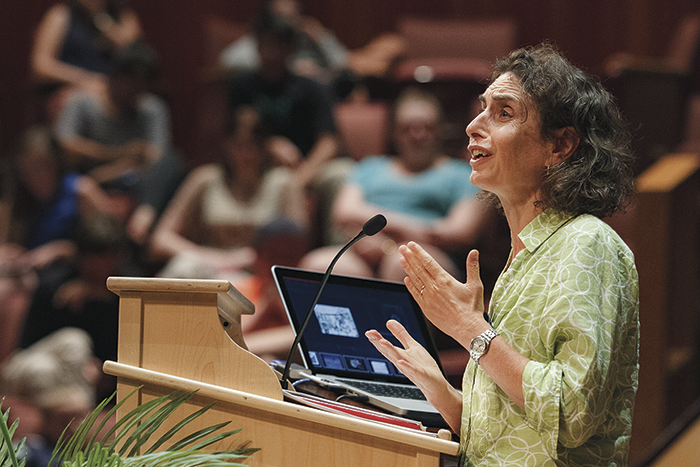 In The Sixth Extinction: An Unnatural History, Elizabeth Kolbert points to five mass extinctions in the Earth’s long history—the last one wiped out the dinosaurs—and makes a strong case that there’s a sixth major mass extinction afoot. This time, humans are the cause. During her four-day residency as the 2016-17 recipient of the Sam Rose ’58 and Julie Walters Prize at Dickinson College for Global Environmental Activism, Kolbert sat down with Dickinson Magazine writer/editor MaryAlice Bitts-Jackson to discuss what it was like to write her Pulitzer Prize-winning book—a project that took her to rainforests, oceans, bat caves, coral reefs, Arctic snowbanks and labs around the world to see the effects of civilization on our ecosystem and to consult with top scientists working in the field.

BITTS-JACKSON: When most of us think about extinction in the modern world, we think about isolated incidents—the honeybee in one part of the world, a great ape in another. Mass extinction is different.

KOLBERT: It’s sort of what it sounds like: a lot of species, across a lot of different groups, are going extinct at the same time. There have been five of these major mass extinctions—and, somewhat oxymoronically, there are also minor mass extinctions—in the fossil record.

BITTS-JACKSON: And the sixth mass extinction is underway and progressing really quickly?

KOLBERT: Even though these things look slow from a human perspective, they’re phenomenally fast, from a geological perspective. The only potential analog is the asteroid aspect that did in the dinosaurs 66 million years ago. When scientists look back in the record, they have a hard time finding analogs for what we’re doing right now.

BITTS-JACKSON: And we’re the culprits?

KOLBERT: We are definitely the culprits … We might say, “OK, that creature was done in by deforestation, or … an invasive species,” or “That one was done in by an imported pathogen.” But if you look at the big pattern, you see that they can all be traced back to one needy species, and that’s us. … I don’t think there are any extinctions that we know about in the last several centuries that we can’t trace to some kind of human impact.

BITTS-JACKSON: You went all over the world to see extinction happening … So many memorable and touching and darkly funny moments. I’ll never forget the rhino ultrasound. And the bats! I can’t stop thinking of the bats.

KOLBERT: Most extinction takes place in absence. You can’t see it. But you can actually see that these bats—which are very common bats here in the northeastern U.S.—are being killed off by this imported disease. I’ve been back almost every winter to the same [cave], and there is a remnant population of bats there, but the numbers are a tiny fraction of what they used to be.

BITTS-JACKSON: In researching this book, what moments affected you the most?

KOLBERT: I’m not a scuba diver, but I really loved being out on the Great Barrier Reef. I found that sort of mindblowing, like a hallucinatory experience, almost. ... The world of the oceans is very different from the terrestrial world, and one of the great things about the oceans is that if you’re on a reef, you’re just seeing a variety of life that you can never see on land—it would all be hidden behind the leaves, like a rainforest. So it’s really a fantastic sight, and I would love to go back.

BITTS-JACKSON: It takes fortitude, hardiness, to even go out there on the tundra, into caves, to the Great Barrier Reef. It also takes fortitude to keep facing dismal information—to keep going there over and over again. What do you think it is that allows you to keep going?

KOLBERT: People write books about all sorts of horrors, to be honest. People are war correspondents. I would find that really impossibly depressing—man’s inhumanity to man. One of the ironies or paradoxes [is that] … in the process of writing the book, I actually went to amazing places. I went to the Great Barrier Reef, the Amazon rainforest, the Peruvian cloud forest. I wasn’t reporting from Syria and seeing dead bodies in the street. It was often quite fantastic and beautiful, even though the basic thrust of [the book] is pretty heavy.

BITTS-JACKSON: Do you look at a landscape differently now?

KOLBERT: The fragility of the world, definitely, and the fact that things can be wrecked a lot more easily than they can be protected, at this point in time, is a very sobering and saddening fact … Anyone who studies the Great Barrier Reef anyone who studies the Amazon, has seen this way more intimately than I have. People who have watched it over many years will tell you how it’s already quite degraded from what they knew when they started out their careers, [and how] even places that are extremely remote and untouched—no one’s digging them up, no one’s mining them—are all touched by us. That is definitely the overriding message of the book. There’s no place on Earth—and this is true, even in the deep oceans—where you can’t find human impacts now.

BITTS-JACKSON: How can we prepare young people to do better in the future?

KOLBERT: Journalists always act on the notion that knowledge is power, and it’s better to know things than not, including things that are painful. I don’t want to say that acknowledging what’s going on will solve it—this is not like a 12-step program, like the first step is acknowledging the problem—but I do think, from just a sort of ethical standpoint, that acknowledging the problem, and one’s participation in it, is crucial. Unfortunately, what we see in our politics now, [is that some people find it] easier to just say, “Well, it’s not a problem,” and deny what are, unfortunately, scientific facts. I think  that the power of simply facing the truth—there’s a lot to be said for that.  You wouldn’t think that would be such a big barrier in the 21st century, but it turns out to be.