The Value of a Dickinson Education 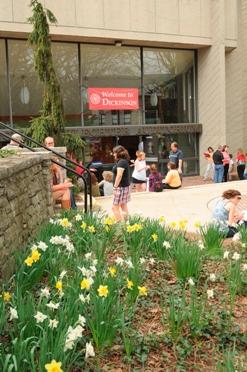 Bloomberg BusinessWeek says Dickinson is a “Holy Grail” college, where a bachelor’s degree offers an above-average return on investment.

A Dickinson liberal-arts education is a low-cost, high-return investment, making it one of the 50 “Holy Grail” colleges and universities, according to Bloomberg BusinessWeek.
The weekly business magazine did its study  in collaboration with Payscale, examining 693 colleges and universities. At schools that made the top-50 list, a typical financial-aid recipient can receive a bachelor's degree for an average cost of less than $74,000 and the 30-year return on investment (ROI) is well above average, at 147 percent to 324 percent of the national average.
Some of the most selective colleges and universities in country were featured on the Bloomberg BusinessWeek list. These include Stanford, Harvard, Yale, Columbia, Princeton, Penn,  Brown and Johns Hopkins Universities and Williams, Amherst, Colgate, Holy Cross and Washington and Lee Colleges. Dickinson appears at number 37 on the list.
Read the Bloomberg BusinessWeek article “Fifty Affordable Colleges with the Best ROI.”