A Commitment to Success 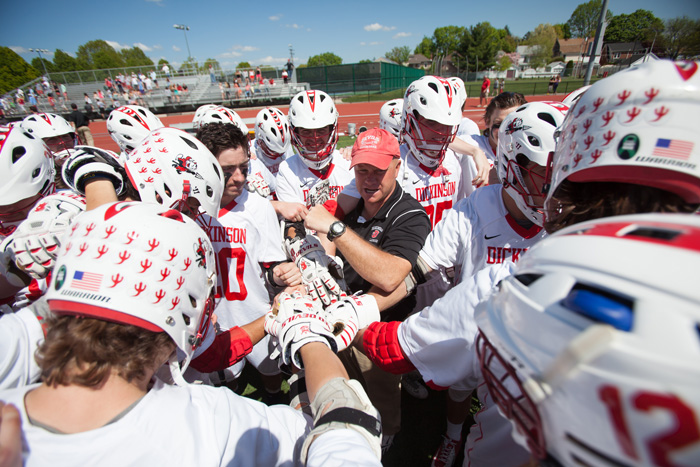 Over the course of 372 games and 218 victories, Dave Webster ’88, associate athletic director and head men’s lacrosse coach, earned the reputation of a leader whose commitment took the team to new heights. Now he’s being inducted into the Central Pennsylvania Chapter of US Lacrosse Hall of Fame as part of its inaugural class.

Born into what he calls “a lacrosse family,” Webster says he grew up playing the sport, which instilled in him a love of the game that has always enhanced his service as a coach.

“I had a great experience playing here and loved it, and that certainly led me to pursue it professionally,” says Webster. “Mostly because I thought there was a lot we could do to improve and get better and I wanted to be a part of that process here at Dickinson.”

Following graduation, Webster spent two years coaching at a prep school before he moved on to Marymount University, where he started a lacrosse program and served as coach for seven years. After spending three years at Franklin & Marshall College, Webster returned to Dickinson in 2001.

During his fifth season as Dickinson’s coach, Webster hit 100 career wins and became the college’s all-time win leader shortly after. Under his direction, the Red Devils made four straight NCAA Tournament appearances and won three consecutive Centennial Conference (CC) championships (2010-13). Members of Webster’s lacrosse program frequently earn All-CC and All-American honors, with some even competing in the North-South All-Star game and others earning Academic All-American honors. And they see Webster as a big factor in their success.

“Coach Webster is a phenomenal coach,” says Paul Anderson ’17. “He cares about every single player as an athlete and a young man. He ensures that we excel on the field, in the classroom and more. He is one of the best resources that Dickinson has to offer.”

On top of all of the records Webster has helped set in his time at Dickinson, his players have been recognized for their commitment to service by both the American Red Cross and the National Association of Athletic Administrators.

“I see this as a recognition of the efforts of this program—meaning myself and my assistants and our players—to do great things with this program, but also give a lot back,” says Webster, who considers the Hall of Fame honor a milestone that honors the entire team. “I think it’s a neat recognition for everyone associated with Dickinson lacrosse.”

Although Webster jokes that “if you do something long enough,” honors like this are eventually awarded, Director of Athletics Joe Giunta says the Hall of Fame inauguration is well deserved.

“The way he leads his program here on campus and the impact he’s had on the student-athletes over the years, it didn’t come as any surprise to me,” says Giunta. “He really has done a tremendous job here at Dickinson, and the fact that he’s being recognized by this body is fantastic. He’s a hall of fame Dickinsonian.”