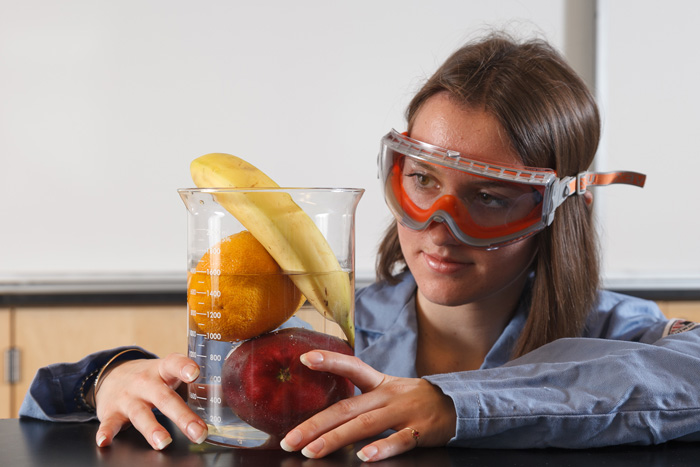 More than 70 percent of the earth is covered in water, but you don’t have to be a hydrologist to know that nearly all of that water is undrinkable salt water. And the 3.5 percent not filling the earth’s oceans runs into enough trouble that “Flint water crisis” has become a household phrase and headlines like “Public water supply is unsafe for millions of Americans” don’t surprise anyone.

The long and short of it is, our drinking water, already in short supply, is under attack regularly.

So a group of first-year students in Professor of Chemistry Cindy Samet ’82’s Chemistry 141 course recently delved into some novel research, exploring if and how well various fruit peels can decontaminate water.

“Chem 141 has always been tied to sustainability and the College Farm,” says Samet, noting that instead of fruit peels the class’s previous eight years focused on antioxidants. "But this year, students worked from an original research paper and pioneered their own protocols and hypotheses from this new research.”

The research began with students deciding which fruit to use and which pollutant/toxin to try to remove. They then headed to the College Farm for the produce and into the lab for the experiments.

Matt Loalbo '20 and Bryce Descavish '20 tested okra in effective absorption of lead ions, and after a week, the pair got their peak-effective results: The okra peels filtered out 100 percent of the lead ions while the seeds filtered out 50 percent.

“Maybe in the next 10 years we could use it to do things like purify water in situations such as in Flint, Michigan,” says Descavish. “There's definitely so much more to this field, because we just scratched the surface of this, which is nearly unexplored territory.”

It’s “nearly” unexplored territory because the project was inspired by a 2015 academic paper brought to Samet’s attention by colleague David Crouch, professor of chemistry, in which avocado skins were used in similar tests. But having first-year undergraduate students do the experiment is a whole new ballgame.

“I had never done research like this before, and I didn’t know it would be available in a first-year class, especially in my first semester,” says Justina Warnick '20, who, along with lab partner Ryan Murphy '20, tested lemon peels and seeds against lead ions in basic and acidic solutions. “It was a big learning experience: We had a rocky first trial before we did the real experiment, and we learned a lot from that and became more confident in the lab.”

Their lemon seeds and peels, ground up and boiled, proved to be highly effective, with the seed in acidic solution removing 100 percent of the lead ions and the peel in acidic solution removing 96.4 percent. Early successes are likely to spur even greater interest in the field for students, and Samet says the way the course is set up will advance that enthusiasm as well.

“At Dickinson, we're really good at getting students in the research lab early on,” she says. “Getting first-year students really understanding the excitement of the scientific process keeps them interested, and at a lot of schools, students don't even get to do research until after their junior year.”

Michael Murphy '20, Ryan’s twin brother, embraced the unknown in the lab and saw it as a real opportunity to flex his intellectual muscles.

“I've never done this sort of research before, and a lot of it was original thinking,” says Murphy, who along with lab partner David Gerstenfeld '20 found success using oranges to remove methylene blue from a solution. “We planned a lot of it on our own, and it was a really nice change. I know in high school and even at other colleges you don't have as much of an opportunity to do original thinking at this depth.”

The next step is recording the results in full and submitting them to journals for publication, with the hopes of providing a roadmap for others in academia looking to conduct similar experiments. Samet says she’d also like to explore the “why” of the peels' decontamination ability and the idea put forth in the previous paper about regenerating the peels for further use.

“This field of research gives us enough to work with, really, for years,” she says of a project that explored the efficacy of everything from bananas and sunflower seeds to pumpkin seeds and garlic. “And it's great to have a repertoire of different big projects with a similar theme of food, sustainability and green chemistry. It’s really exciting.”