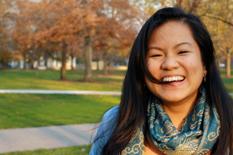 Giovania Tiarachristie ’13, pictured in Sao Paolo, where she is currently studying abroad, will assemble with all 2012 Udall Scholars this summer in Tucson, Ariz. She says Udall Scholars represent “little pockets of hope across the nation who believe in change enough to actually make it happen and inspire others to rise and act.”

For the second-consecutive year, Giovania Tiarachristie ’13, an international-studies and sociology major from Pittsburgh, Pa., has been selected as a Udall Scholar in recognition of her environmental and social-justice work on and off campus.

The Udall Foundation provides federally funded scholarships for students who have demonstrated a commitment to careers in the environment or Native-American tribal public policy or healthcare. Scholars also must demonstrate leadership potential and academic achievement. This year, 80 scholarship recipients were chosen from a field of 585 candidates from 274 colleges and universities. Each scholarship provides up to $5,000 for the scholar’s junior or senior year.

“The foundation provides financial support, networking opportunities with alumni, job opportunities across the nation and connects me to other national scholars with whom I still keep in touch,” says Tiarachristie.

A finalist for the 2012 Truman Scholarship, Tiarachristie has been busy with new challenges since first receiving the Udall Scholarship in 2011, starting with summer work at the Dickinson College Farm, where she helped with sustainable agriculture issues and biodiesel management. She serves as a board member of Dickinson’s Idea Fund, which equips students with resources to turn ideas for improving campus into viable projects, and she is currently abroad in Sao Paulo studying urban planning and social inequality.

Looking ahead, Tiarachristie plans to pursue her master’s in urban planning and public administration in community development. “I want to incorporate environmental justice into urban design,” she says. “I’m passionate about creative engagement with low-income residents to increase education, participation and collaboration to preserve the health and livelihood of at-risk communities.”

The 2012 Udall Scholars will assemble August 8-12 in Tucson, Ariz., to receive their awards and meet policymakers and community leaders.

The Morris K. Udall and Stewart L. Udall Foundation honors the legacy of the late Morris, who represented southern Arizona in the U.S. House of Representatives for 30 years, and his older brother Stewart, who also represented southern Arizona in Congress from 1955 to 1961. The two worked together on many environmental and Native-American initiatives while Stewart was secretary of the interior and Morris a member of Congress.