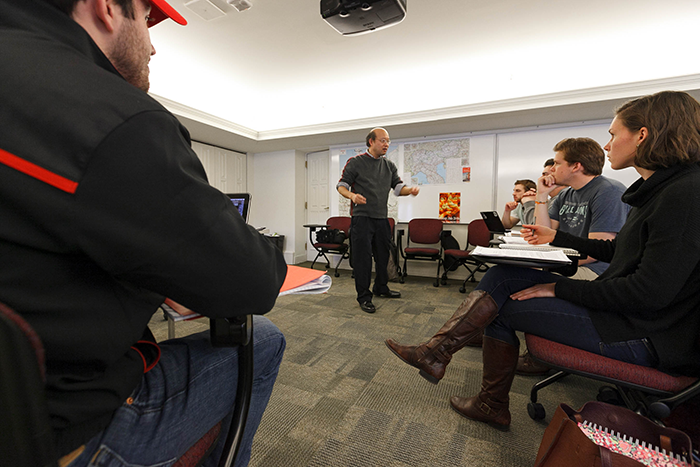 Neil Weissman, interim president, and Shalom Staub, associate provost for academic affairs, were awarded $650,000 from the Andrew W. Mellon Foundation for the college’s Civic Learning and Engagement Initiative. The grant will launch a four-year initiative to significantly enhance civic learning and engagement in the undergraduate liberal arts curriculum. Specifically, the grant will provide project and seed funding for a new faculty position in practical ethics and incentives for faculty to infuse civic learning and engagement more broadly throughout the college’s curriculum. The latter will involve departmental study groups to help define specific civic learning goals and community engagement opportunities, interdisciplinary faculty seminars focusing on critical social issues, creation of a college community learning network and faculty development workshops on inclusivity. Participating faculty members will have the opportunity to apply for internal grants or reassigned time for related curriculum development and scholarly projects.

Dengjian Jin, professor of international business & management, John J. Curley ’60 and Ann Conser Curley ’63 Faculty Chair in International Studies, Business & Management, was one of just two recipients of the 2016 Schumpeter Prize, awarded biennially by the International Joseph A. Schumpeter Society to scholars who contribute to the study of evolutionary economics, which includes the studies of economic change, innovation, innovation policy and natural innovation systems. Jin is the first liberal-arts professor to earn the prize. He was recognized for his 2016 book The Great Knowledge Transcendence: The Rise of Western Science and Technology Reframed, in which he traces the history of knowledge and of knowledge evolution from prehistory to the modern era.

Lorelei Koss, professor of mathematics, published “Elliptic Functions with Disconnected Julia Sets” in the International Journal of Bifurcation and Chaos, Vol. 26, No. 6 (2016). Koss writes, “In this paper we investigate elliptic functions of the form fΛ = 1/(1 + (℘Λ)2), where ℘Λ is the Weierstrass elliptic function on a real rhombic lattice. We show that a typical function in this family has a superattracting fixed point at the origin and five other equivalence classes of critical points. We investigate conditions on the lattice which guarantee that fΛ has a double toral band, and we show that this family contains the first known examples of elliptic functions for which the Julia set is disconnected but not Cantor.”

Professor of Physics Hans Pfister, Sun Woo Kim ’13 and Tyler Ralston ’15 published “A novel gridded solar air heater and an investigation of its conversion efficiency” in Solar Energy (vol. 136) in which they describe their design for a highly efficient solar air heater (SAH) that could be inexpensively and easily constructed and would pay for itself, through energy savings, within about one year of use. They outline a streamlined SAH design, in which air is pushed through the solar air heater via a small fan. The air, while passing through six specially corrugated layers of sunlight-absorbing grids, is heated as it interacts with the hot absorber surface. This SAH can be used to heat a room or small building; several SAHs can be configured as a carbon-footprint-reducing, supplemental system to heat a whole house. It also can be used to efficiently dry and preserve food. Read more at dson.co/ pfistersolarenergy.