Fire in Her Heart 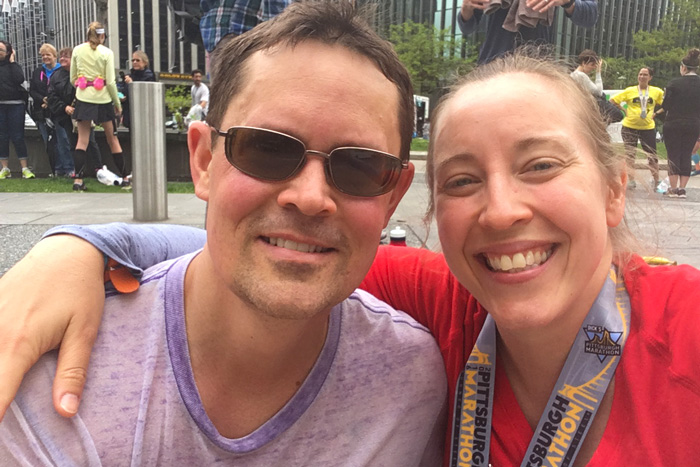 Annie Nagy '99 and her husband, Ryan Durkopp, soon after running the Pittsburgh Marathon. Nagy stresses that she only ran the half marathon, which is still quite an accomplishment!

Annie Nagy '99 is the AmeriCorps program director for the National Health Corps Pittsburgh, via the Allegheny County Health Department, where she administers and monitors a community-based health and human service program. Previously, she'd been doing similar work around the world, from Guinea to Gabon. Read on to find out about what inspires the former anthropology and political science major and how she stays connected to Dickinson.

Dickinson’s liberal-arts approach opened me to a much bigger world than I had previously been exposed to. The classes I took and the people I met at Dickinson made me a more socially aware and environmentally conscious person. I developed a passion for travel and service that led me to join the Peace Corps after graduation. While in the Peace Corps, I became immersed in the field of public health and knew it was what I wanted to do with my life. I therefore went to grad school to get a master's in public health and have been practicing in the field ever since.

I loved playing intramural sports (flag football, floor hockey, basketball, volleyball, squash), and in fact senior year I got an award for signing up the most teams throughout the year. And I loved volunteering with the Habitat for Humanity Dickinson chapter, especially going on alternative spring break trips.

I studied abroad in Cameroon for a summer and Italy for a year. My greatest memories were outside the limestone walls. The first time I flew on a plane was to Cameroon, and I remember getting off the plane and walking into a steam bath of heat and humidity and loving it. In Italy my favorite times were trying my best to communicate with locals, visiting the most beautiful places, eating the best panini and making lasting friendships.

I stay involved with my college friends and we plan trips and get-togethers every year (we went to Nashville last year and have plans to go to London next year). I’ve been back to visit during Alumni Weekend to reconnect with professors and friends and to see how the campus has changed and evolved.

I fell in love with public health when I was serving as a Peace Corps volunteer in a tiny village in Guinea. There I facilitated disease-prevention activities and provided education to community members on prenatal care, child nutrition, family planning and child birth spacing and STI/HIV prevention.

I would say that the most challenging part of my work—and the most rewarding—can be the mentoring part of my job. I absolutely love it, but sometimes it's hard to encourage or guide people to make the right choices and be confident in their decisions.

After graduating with my master's in public health, I was awarded a Schweitzer Public Health Fellowship and had the opportunity to work at the Schweitzer Hospital in Lambarene, Gabon. I worked with the hospital’s Protection of Mothers and Infants Program and performed women’s prenatal and child consultations, weighed children to monitor growth, vaccinated children and taught women about various health issues, such as family planning, malnutrition and STI/HIV.

I would enjoy having dinner with Harriet Tubman. I would love to discuss with her how she got the fire in her heart to be so courageous and aid so many people to freedom in the face of such danger.

You’re going to live on an island by yourself for a year: what books, albums, and movies do you take with you?

This sounds like my time in the Peace Corps! Books: Anything by Alice Walker, Toni Morrison, Zora Neale Hurston and To Kill a Mockingbird. Music: The Grateful Dead (too many good ones to choose), Bob Dylan’s Blood on the Tracks, Old Crow Medicine Show’s Down Home Girl, Paul Simon’s Graceland, The Band’s The Last Waltz and of course Otis Redding and lots of Blues. Movies: Stand By Me, Dead Poet’s Society, The Usual Suspects, The Big Lebowski, Napoleon Dynamite, The Princess Bride, Wet Hot American Summer and Wes Anderson films.