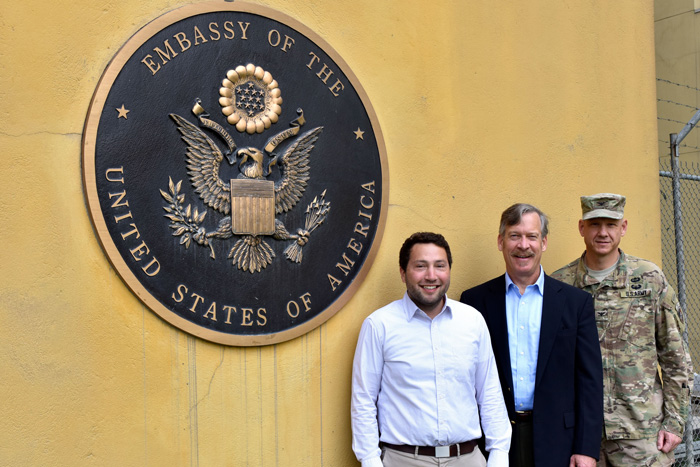 Three Dickinsonians find each other in the American embassy in Kabul, Afghanistan

Located in the Wazir Akbar Khan neighborhood of Kabul, the capital of Afghanistan, the U.S. embassy is home to the U.S. ambassador to Afghanistan and a host of military personnel, foreign service officers and governmental staff helping with the war-torn country’s rebuilding, security and development efforts. It’s a refuge of sorts, situated in a city growing faster than it can handle, centrally located in the most historically tumultuous region in the world.

“I discovered that George was working in Kabul through a posting in Dickinson Magazine,” says Strine (economics), a foreign service officer with the U.S. Agency for International Development (USAID) who has been working in the international development field for nearly two decades. “We didn’t know each other well [at Dickinson], but when I saw he was deployed next door, I went over and started asking around until I found him and popped in his office.”

Smawley (English, policy management; ROTC) transitioned to Hawaii in July as senior legal advisor for the U.S. Army Pacific. In Kabul he was senior legal advisor for U.S. and NATO forces in Afghanistan, serving as the personal legal counsel to the four-star commander, Gen. John W. Nicholson, as well as the NATO and U.S. forces headquarters staff and the supervising attorney for all uniformed U.S. and NATO legal personal and services in Afghanistan.

He sees the American and NATO mission as essential to the stabilization of Afghanistan’s future.

“The principal challenge [in Afghanistan] concerns sustainable security in the country and the development of capacity within the security institutions to achieve it,” says Smawley, who was immersed in international agreements, human rights, military operations, fiscal law, ethics, soldier support and intelligence law while in Kabul. “Afghanistan has a lot of potential—its extractive and agricultural resources are considerable, and its geography is favorable for South-Asian trade. But without security, it will forever lack the investment required to maximize its potential.”

Also there maximizing potential is Banco (history), a foreign service contracting officer for USAID, who came to Kabul by way of Kampala, Uganda, and will next head to Bogota, Colombia, after a short stint in Washington, D.C.

“I think progress is mixed but is definitely happening in specific areas,” Banco says of Afghanistan’s revitalization. “More women are being educated and employed, and I think we definitely see improvements in education and health outcomes throughout the country.”

The unexpected is expected

Banco and Strine knew each other from the embassy, but it took a while for them to realize that they were from rival Connecticut towns and that they both went to Dickinson. The funny thing is, all three of them being there together didn’t come as much of a shock.

“When Jonathan, George and I got together for the first time, we were not surprised at all that three Dickinsonians would connect in a foreign capital, given the college’s culture of encouraging study abroad and being good global citizens,” says Strine, who will next head to El Salvador. “In fact, we speculated that there must be more Dickinsonians in Kabul that we just didn’t know about.”

And all three of these Dickinsonians speak of their time on campus, and the college’s ethos, as influential on their careers.

“My Dickinson liberal-arts education helped prepare me to work at the strategic level with foreign senior leaders, and NATO more generally,” Smawley says, noting that there are about 40 countries represented in Afghanistan under the NATO Resolute Support mandate. “The patience, openness, shared perspective and capacity for a shared vision with leaders from very different backgrounds, experiences and cultures has been invaluable. I credit my Dickinson education for laying the foundation that has enabled me to succeed in this joint-coalition environment.”