Beneath the Throne Room 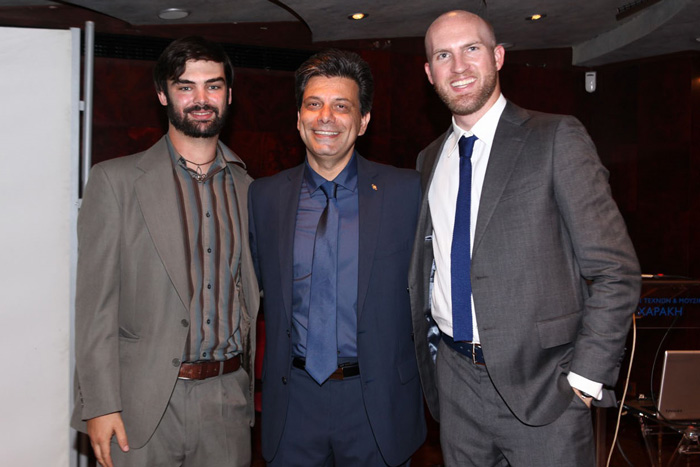 From left: Dan Fallu '09, Associate Professor of Archaeology Christofilis Maggidis and Erik DeMarche '11, the team behind the recent discovery of the ancient "throne of Agamemnon."

Sometimes when your phone is ringing nonstop, there’s good news on the other end.

“When I saw the photo they sent me ... the thrill of such a discovery cannot be put into words,” says Associate Professor of Archaeology Christofilis Maggidis, describing the moment when, in Mycenae, Greece, he finally looked at his phone to see a text from former archaeology students Dan Fallu ’09 and Erik DeMarche ’11. “Thirty years of fieldwork, experience and research were compressed in that very moment—time stood still, instinct and feeling took over momentarily.”

The photo Fallu and DeMarche sent, back in June 2014, was of a large stone fragment, and Maggidis, as he says, “knew at first glance”: It was a piece of the throne of Agamemnon, the mythological king of Mycenae and a looming figure in the ancient literary tradition.

“We both knew that the throne might be in the area—in fact, we had been joking about finding the throne as we set out that afternoon,” says DeMarche, who has been a freelance archaeological contractor around the world since earning his master’s degree from the University College London. “That being said, neither of us expected to stumble onto such a discovery.” 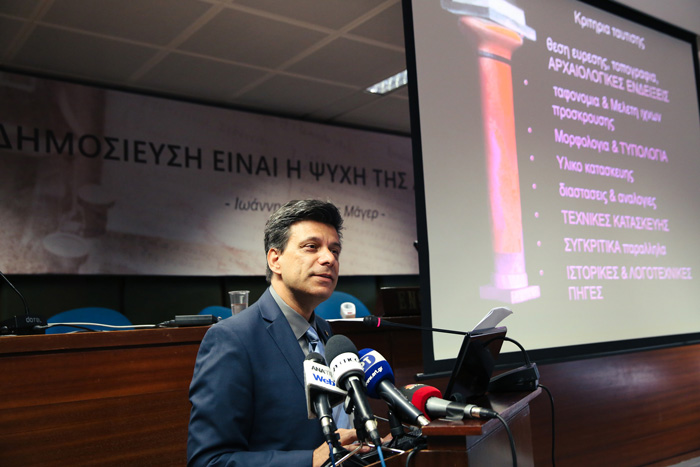 Maggidis presents his team's findings to the Greek press.

The fragment was found at an ongoing dig site in the Chavos ravine, near the home base of the Mycenaean Foundation, led by Maggidis since 2013. The Mycenaean palace, destroyed around 1200 BCE by an earthquake, belonged to the last historical king of Mycenae, who was called “Agamemnon” in mythology. Tempering the team’s excitement over the find is the need all three expressed in undertaking an objective assessment of the fragment, an assessment that has been going on for more than two years now.

“I treat this find no differently than any other: I simply want to extract as much information as possible and have worked to find the similarities and dissimilarities between this and the only unequivocally known Bronze Age Greek throne, at Knossos,” says Fallu, who has been working at Mycenae and near Corinth and Sparta as a part of his graduate studies at Boston University. “It certainly is exciting that this could be the throne from the throne room itself,” Fallu adds. ”Any stone seat is a rarity, and even the choice of stone might be important as we discover more about these sites during this difficult time in prehistory.” 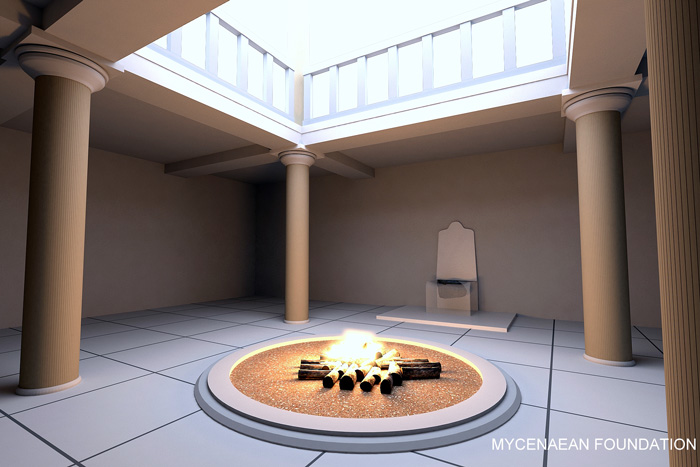 An artist's rendering of the throne room based on the discovered fragment. Courtesy of the Mycenean Foundation.

“You must distance yourself [from the initial excitement] and face the find as a scientist: inquire, raise questions and doubt everything,” says Maggidis, the field director of archaeological excavations in Mycenae since 2001 and someone who has been doing this long enough to know that “your role is to find out not what you think it may be but what it actually is.”

So Maggidis and the Mycenae group have carefully examined the 110-lb. polished stone fragment—through the lenses of topography, archaeology and historical context, taking into account material traits of the fragment and its similarities with the throne of Knossos—and have eliminated all other interpretations of a basin, altar, offering table or mortar.

Initially, the throne’s authenticity was questioned by Basil Petrakos, the secretary general of the Athens Archaeological Society—notably, Maggidis says, before Maggidis was able to publish anything about the find.

Maggidis sees any skepticism fading away after the forthcoming 2017 report, and he plans to fully explore, survey and excavate the Chavos ravine in its wake.

“The scientific importance of the find being the only throne of a Mycenaean palace found so far on mainland Greece … is undeniably immense,” says Maggidis, calling this one of the “most important and emblematic finds of the Mycenaean age.”