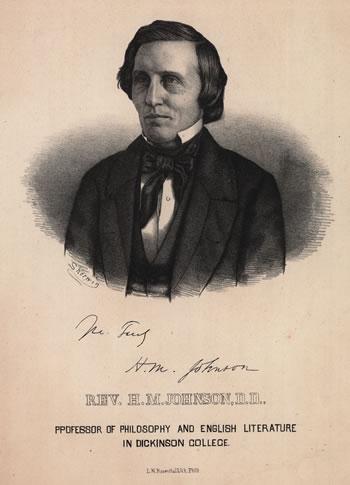 The Civil War forced nearly all citizens and civic organizations to declare their loyalties. Ministers and churches were no exceptions: Private correspondence from the war years teems with professions of loyalty and accusations of disloyalty. No matter what the context, civilians living through the Civil War used their loyalty to the Cause to advance their other causes. This is not to say that their patriotism was disingenuous or that the cause of the Union was a mere pretense. As a recent study by historian Gary Gallagher has concluded, most Northerners believed that the Union was worth fighting and dying for because it stood as a beacon of liberty in a world replete with monarchies and despotism. The larger point is that language of loyalty permeated civil discourse—both public and private—in the North during the Civil War.

In the letter below, college president Herman Merrills Johnson asked politician Simon Cameron to consider creating an endowed professorship at Dickinson. Johnson extolled the general benefits of civic education as well as Dickinson’s specific virtues, and his plea sheds light on the effects that the friction of war had on private institutions in regions near the North-South border.

Simon Cameron was known as one of the wealthiest, most powerful and most corrupt politicians and businessmen of the 19th century. Cameron had a reputation for purchasing seats in the U.S. Senate—once as a Democrat in 1845, then as a Republican in 1857. In 1860-61, Cameron sought the cabinet position of secretary of the treasury, but Abraham Lincoln received too many objections that the appointment would be tantamount to putting a thief in charge of the U.S. Treasury. Instead, Lincoln appointed him secretary of war, but charges of fraud and corruption forced his resignation in less than a year.

The following letter, which is included in the Simon Cameron Papers at the Historical Society of Dauphin County in Harrisburg, Pa., reveals some of Johnson’s efforts to place Dickinson College back on sound financial footing. I have silently deleted several superfluous commas and one accidentally repeated word but have otherwise kept the transcription as close to the original as possible.

I beg leave to intrude on your time so far as to ask your attention to the following communication. And let me hope you will take the occasion to read it when you shall have leisure to give its suggestions a candid consideration.

I come to ask a benevolence for Dickinson College. Permit me to show reasons.

It is not from any personal claim to your regard that I presume to take this liberty, but from my official position & responsibilities, prompted only by motives of public interest & encouraged by your known liberality & abounding amplitude of fortune.

I desire to use entire simplicity & frankness of statement.

As a Pennsylvanian, I assume that you are interested in the welfare of your native state. Your good fame is linked with hers. Whatever may contribute to the material prosperity of the commonwealth, to the promotion of the general intelligence of the people & to the advancement of the higher forms of culture & civilization, can not be to you a matter of indifference.

The development of the material resources of the state is such as to satisfy every reasonable demand. Our system of common schools is now demonstrating an efficiency which must be gratifying alike to the statesman & the philanthropist. Our Academies & schools of medium grade are numerous & worthy of public confidence. In the higher grade of Scientific & Classical School—let us confess the fact—we are not equal to the demands of our position.

All the other older states have fostered their Colleges by legislative appropriations. The liberality of New York to all her Colleges has been princely. That of the New England states to certain favorite Colleges, even more so. Most of the Southern states, following the policy of Jefferson in Virginia have made such appropriations to sustain one Central University in each, as to give them high reputation, at least. Pennsylvania has done very little of the kind.

Most of the older Colleges in the other states have also had their funds increased by individual munificence of the most noble character. In this respect, the citizens of Pennsylvania have not exceeded the Legislature in the measure of their liberality. Our Colleges therefore are kept up to any respectability of grade only by the great sacrifices & overworking of the zealous men who have hitherto conducted them.

You will perceive, Sir, that these statements are intended as a general basis of the frank proposal to yourself to give such an example of liberality as shall do honor to the Commonwealth & carry a blessing to future generations, as well as plant a monument to your own name, which your children shall recall with pride, & which shall claim the remembrance & gratitude of posterity to all time.

You have been blessed of Providence with a large portion of this world’s good, & have not been cursed with the miser’s curse. To hoard could not give you pleasure. Capital, like every other agent, should, to satisfy your mind, be fulfilling a mission somewhere & in some form.

Perhaps you have already meditated some act of beneficence which should be a fitting recognition of the goodness of Providence in such bestowals. If such is the case, or if you may now be moved to such an act, I submit that there is, in my judgment, no way in which you could accomplish so much good & secure so happy results with a given amount of means, as by giving an impulse, in the proper form, to the cause of Collegiate education in this state.

If now, this general conclusion is correct, I think there are special reasons to show that Dickinson College has the first claim on your regard, & that, through it, every good proposed can be most successfully accomplished.

First, its age gives it character. It is more known abroad than any college of the state; & whatever it is or can make itself, is taken as the standard by which is estimated the grade of learning & of the Institutions of Pennsylvania. With the proper endowment, Dickinson would become at once for Pennsylvania, what Harvard is for Massachusetts & Yale for Connecticut. And if one College is elevated it draws the others after it.

Second:—its central location—near the capital—gives it a commanding position for exerting a proper influence thro’ the State.

Third:—it has already done good work for its slender means. It has educated in former years some great men & some good men. Our recent Alumni sustain the ancient reputation well. Of our younger men, some half a dozen are in the present Congress—all loyal men & true.

Fourthly, we have suffered severely by the rebellion. We lost about one half our students at a stroke. Of our Endowment Fund, about two thirds had been collected in Maryland & Virginia, & is held by a Corporate Board located in Baltimore, who paid over the Interest for the use of the College. Several members of this Board of ruling influence proved to be secessionists—traitors—& made every exertion to deprive us of our funds, purely on political grounds. They are failed indeed, so far that we shall ultimately realize our full rights, but they have created serious present embarrassment.

But, Dickinson College is a Denominational Institution. True, but not sectarian. It maintains the platform of the broadest liberality.

The College is under the patronage of the Methodist Church, & Mr. Cameron is not a Methodist.—True, but a man of liberal character, as we have good proofs. Permit me to recall certain facts which are within your knowledge:—that in the early part of President Lincoln’s administration some of our leading men began to fear there was a systematic purpose to ignore the claims of all Methodist men for office;—that one of our Bishops visited the President more than once to urge the argument on his attention. I do not know what impression he communicated; that which he received was, that Secretary Cameron was the only man in the government who seemed to appreciate the justness of our claims, & to be willing to give them a proper recognition. This impression was widely circulated, & created a kindly sentiment in reciprocation, which if fully expressed could not be otherwise than very gratifying to your feelings.

And if the gratitude of our fellow men is a legitimate part of the reward of a good or benevolent act, then surely the measure of that reward is in some sort proportioned to the extent of that gratitude. And who then are they for whom this favor is asked? I go beyond the local interests. The members of the Methodist Church, in the loyal parts, is about one Million. Add the adherents who are not communicants & you have four or five times that number. After making due allowance for the aged, the young & the indifferent, there is left a large population which looks with lively interest to every thing that concerns the church & the Institutions under her care. And to know that one has, by a generous act, moved the feelings of so many thousands of hearts & called forth their prayers in his behalf, is a consciousness which any good man may covet.

But our people are not only numerous, they are worthy the regard of the patriot. In this crisis of the nation, they have a good record. I give one fact. In the late election in this state, we believed the question was between loyalty & disloyalty, or at least a sham loyalty. We have the means of knowing that multitudes severed party ties, subordinated personal preferences & prejudices, & of estimating, that at least ninety two (92) out of every hundred of our church members put on record their adhesion to the side of unsuspected loyalty.

These are some of the points I have wished to call to your attention, & could urge them more at length, but my letter is already too long. Our hope is that you may find it in your heart to endow a professorship here that shall bear your name to all time.

I have been very simple & frank. I am sure you prefer it. I am compelled to the brevity of mere limits; but if it shall please you to entertain the proposition, & you desire further information, I will meet you in Harrisburg any day; & would summon, if you desired it, certain of our trustees—such men as Judge [Augustus O.] Hiester, Col. [John A.] Wright, or Dr. [Aquila A.] Reese of Baltimore.