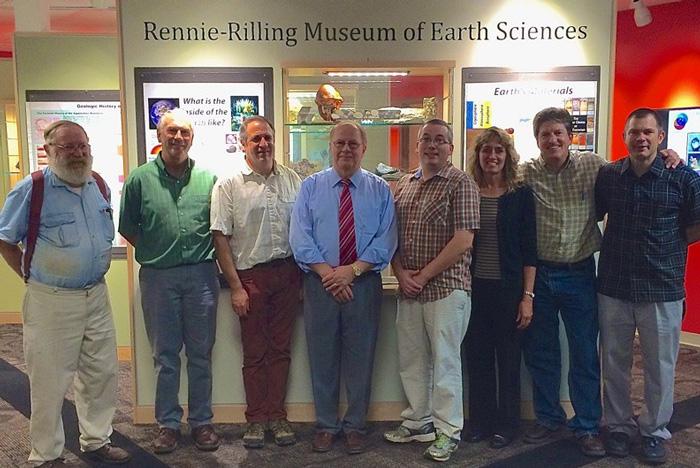 Back on campus in fall 2014, David Rilling '62 (center) gave a presentation, “Innerspace, the Fascinating 3D World of Microminerals," at Kaufman Hall as part of the Department of Earth Sciences seminar series. Over the years, Rilling has donated many valuable fossil and mineral samples to the college for the department's teaching collections.

For 38 years (1975-2013), David Rilling ’62 was a general, vascular and thoracic surgeon at Grand View Hospital in Sellersville, Pa. Now the former biology major is chief of surgery at Lock Haven Hospital, just north of State College, where he’s found new direction working with Lock Haven’s underserved community. He's also been a collector and has generously supported Dickinson's Department of Earth Sciences and Trout Gallery over the years. Read on to see how Rilling’s path unfolded, from childhood inspiration to Dickinson to Vietnam, and how his extensive art collections found a new home in The Trout Gallery.

How do you think your Dickinson experience prepared you for life after graduation?

Our chemistry and biology professors were first rate, and my pre-med classmates were exceptional. It was academically stimulating and challenging to learn side by side with these young, bright, future doctors. In my senior year I loved working on my biology honors project in the old Baird biology building with my mentor, Dr. Robert Ogren. Biology was my major and chemistry my minor, and both fields of study were extremely important to the study and practice of medicine. Ninety-five percent of Dickinson’s pre-med students were accepted into medical schools, which was an enviable record.

I was fortunate to have been part of two winning sports teams—swimming & diving and track & field. Both teams were later inducted into the Sports Hall of Fame. Fraternity life offered many new opportunities for social growth and fun, although balancing that against academics was a challenge and certainly a learning experience in and of itself.

Do you have any especially fond memories from your time at Dickinson?

I remember having to wear the little red caps, or “dinks,” during our freshman indoctrination—a custom that was unfortunately discontinued.

During my freshman year, my resident assistant at Morgan Hall was John Curley ’60, who was a junior at the time with an interest in journalism. John later became the first editor of USA Today, and the John Curley Center for Sports Journalism at Penn State is named in his honor. I remember one evening, with several other mischievous freshman, filling his hand with shaving cream while he was sleeping and then tickling his nose with a feather. The result was quite funny—at least to us.

How did you become interested in becoming a physician?

When I was young boy, I read books about surgeons and the history of surgery and was fascinated, especially by the war stories. I loved the sense of excitement and adventure. Later on I actually became a war surgeon working as a M.A.S.H. surgeon in Vietnam. I'm sure that I was also influenced by my father, who was a family doctor, and my uncle, who was a surgeon. My hobbies as a young boy included microscopy and doing chemistry and biology experiments in the basement of our home.

As a surgeon, there is immediate gratification in seeing the results of something positive that I have done directly to another human being to improve his life. There are very few things that can match that feeling.

What accomplishment are you most proud of today?

I’ve had a very fulfilling life as a physician. One case in particular stands out: In 1977 I was one of the first surgeons in the region, along with two colleagues, to successfully reattach an arm that had been severed at the shoulder on a 19-year-old man. The patient and I remain great friends to this day. He scuba dives and plays a Dobro guitar.

How did you come to build such a vast collection of tribal art?

I was introduced to African culture as a young boy by my father. In our home, he had a special room where he would hide and relax during those rare moments away from his busy practice and family. It was kind of off limits to us kids, but every so often he would invite me into the inner sanctum to see the wonderful things in his collection. He had things from all over the world, and that fascinated me—pre-Colombian figures, wood carvings from Mexico, ship models from New England, mineral specimens and fossils. My mom was also a collector, so I was really predestined to become a collector.

My first African and Oceanic acquisitions happened in the early 1970s, when I purchased some pieces that had been deaccessioned from the University of Pennsylvania Museum collection. [My wife] Karina and I honeymooned in Dakar, Senegal, in 1972 and were fascinated with the culture. We bought a few carvings, which we still have today.

Over the years that followed, I enlarged my collection just as any collector does—through buying and trading and occasionally selling to justify more purchases.

What inspired you to share your collection with The Trout Gallery at Dickinson?

Dickinson has always been close to my heart, and so when I started to realize that these objects could be enjoyed by many more people and for many more years, I thought of Dickinson first. And The Trout Gallery happens to be housed in the exact same building—the old gymnasium and swimming pool—in which I spent many happy hours diving during my college days. A perfect fit. Phil Earenfight, The Trout Gallery director, has been great to work with, and I am happy that my collections have such a good home.