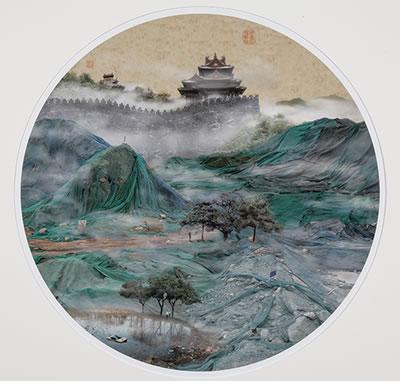 Lu Yao's Viewing the City's Places of Interest in Springtime (2007) is one of The Trout Gallery's recent acquisitions and was featured in the spring show Ink Silver Platinum.

Thousands of images clamor for your attention. You have to move quickly, so you dive in, hunting for that one artwork that will render you starstruck, hoping that no one else will snap it up first. It’s all just a day at the office for international art dealers, and six students got a peek into that world when they scouted works for the college through a new acquisition program at The Trout Gallery.

Funded by the Friends of the Trout Gallery and launched in 2015, the program adds new works to the gallery’s permanent collection while introducing students to the collecting process. Under the guidance of Phil Earenfight, director of The Trout Gallery and associate professor of art & art history, a cohort of students attend two of New York City’s largest print fairs—The Association of International Photography Art Dealers fair (spring) and the International Fine Print Dealers Association fair (fall), held in the Park Avenue Armory—and identify artistically superior works that address significant political and social issues, taking care to stay within a $10,000 budget. They snap photos of the contenders as they go.

“The art historian in me was in dreamland,” said Clara “Maddie” Fritz ’16, an art history major and intern at The Trout Gallery. “I got to see current art trends in  person, and I learned about the politics of the art buying world, how deals are chartered and sealed, what changed the quality and price of a work and how prints were packaged for the ride home.”

Back on campus, the students whittle down their picks with Earenfight’s help and submit a wish list to the gallery board. All recommended pieces have been purchased thus far.

The program’s first cohort—class of ’15 members Anna Ersenkal, Lindsay Kearney and Sasha Reagan—zeroed in on photographs focusing on environmental and political issues in modern Asia. That area of study saw increased interest on campus when Wei Ren, recipient of the 2015 Tamar and Emil ’53 Weiss Chair in Asian Art, joined the faculty in 2015; the prints were featured in the recent show Ink Silver Platinum.

This past November, Fritz and Lucas Kang ’16 (studio art) and Elon Gordon ’17 (physics) advocated for several prints by Käthe Kollwitz, a German expressionist who depicted the brutal realities of poverty, social injustice and war. “It was a no-brainer for me—her works are so visually engaging,” said Kang. “The question was, which ones do we pick?”

They knew the college already owned a Kollwitz print—a part of the artist’s peasant war series—and that foreign-language, cultural studies and history professors had incorporated it into lessons on the world wars. In the end, they selected two works from the same series, knowing that they would be widely used.

“That’s the really satisfying part,” said Gordon, who testifies to the prints’ cross-disciplinary appeal and emotional punch. “It’s great to know that as a student, you can have a lasting impact in this way.”