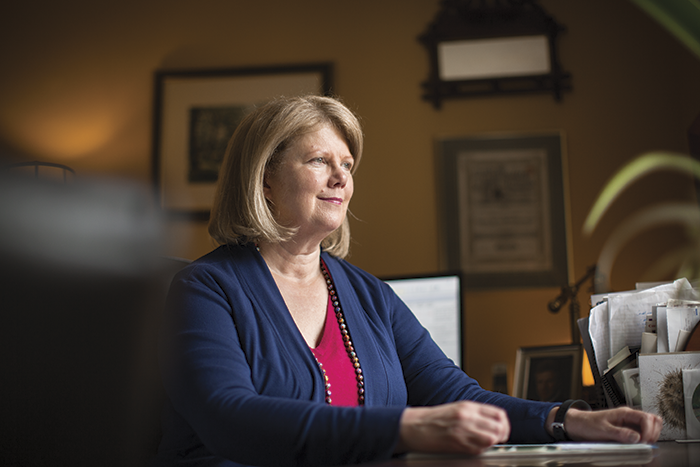 For Catherine Friend White ’78, what first appears to be a setback, is also an opportunity. Take Black Monday in 1987, for example. She had completed her MBA in finance at Babson College, was working as a portfolio manager for a successful mutual fund company and recently had been made partner. But when the market crashed and the company was sold, she found herself casting about for something new. “The acquiring company took all our assets and not the people,” she recalls. “There wasn’t a lot of hiring going on.”

She interviewed with some of the top firms in Boston, including with one potential employer who conducted the entire meeting in French (he had noticed on her resume that French was one of her majors and wanted to brush up on his own language skills). Nothing seemed to fit, however. “I had had such a good experience there, I couldn’t find anything that measured up,” she says. Meanwhile, she was volunteering at the local hospital, and it was during a conversation with one of the nurses that the seed was planted for her investment management firm, FinArc LLC. “One of the nurses was looking at her 401K statement and asked, ‘How can anyone expect a nurse to know which fund to pick?’ ”

“One of the nurses asked whether I could help with that.” So White offered her services. “That client is still with my firm,” she says. Founded as Financial Architects in 1990, FinArc serves individual investors and smaller institutions, including corporate pension plans. FinArc also specializes in socially responsible investing, which helps clients match investment opportunities with their personal values.

“My first job was with Pioneer Group, and they screened out alcohol, tobacco and gambling stocks,” White says, “I started thinking about apartheid, polluters. Once I fast-forwarded to my own company, I helped clients decide where to invest based on whatever issues were most important to them. I try to give people both sides of the situation.”

White’s comfort with both sides of situations most likely was fed by her studies as a philosophy and French double major. From ethics to metaphysics to logic and rhetoric, White was smitten. “Philosophy covered so many facets of life,” she says. “I absolutely fell in love with it.”

She also fell in love with fellow philosophy major Richard White ’75, who recently retired from his position as director of software quality assurance at Fidelity Investments. The two met in the middle of High Street in front of then-Spahr Library and soon discovered a mutual interest in games and puzzles. Together for 42 years now, they form one half of a bridge quartet that meets monthly, and they host the annual New England Checkers Championship, a highly competitive tournament sanctioned by the American Checker Federation.

Since 2013, White has been a managing director at Golden Seeds, an early-stage investment firm, and she focuses on those who can make a real difference in the world, which may be why she helped seed the Innovation Competition at Dickinson. With more than three decades’ experience in finance, White seeks out and supports budding entrepreneurs of all ages, from 20-somethings to retirees pursuing new passions. “The most important thing we look for is the founder,” she says. “Is the founder going to be really dynamic, really capable? At Golden Seeds, 70 percent of the companies we work with are first-time entrepreneurs. We like to see a company where we can help make connections.”

White points to one of her latest projects, the inventor of DayOne Response, a personal water treatment backpack that can be quickly deployed by relief organizations and NGOs after a natural disaster hits. The patented bag, which can filter any source of water into potable water, has garnered multiple technology awards and has helped thousands of disaster victims from the Philippines to Nepal. “This is someone who can make a good living and have a social impact,” White notes. “That’s inspiring, to see people transform their lives.”