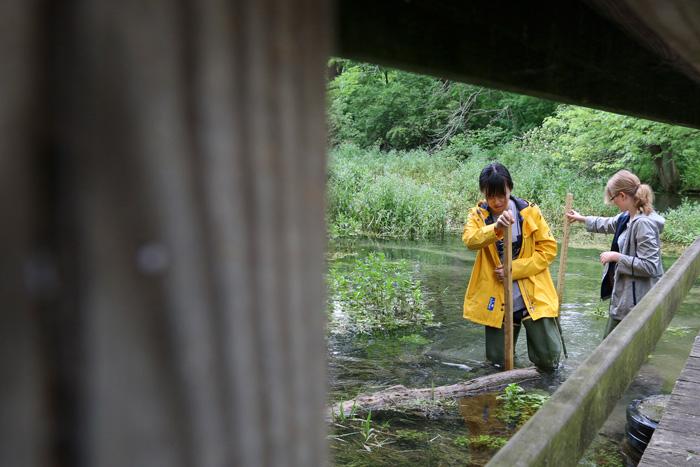 In 1986, the federal Water Resources Development Act underwent the largest update since its inception and saw its scope vastly broadened. Under new mandates, water-quality issues, erosion and stormwater were all addressed more comprehensively. That same year, Candie Wilderman, professor emerita of environmental science and co-founder of Dickinson’s Department of Environmental Studies & Environmental Science, launched an initiative that would one day tackle those same issues when it broadened its own scope as the Alliance for Aquatic Resource Monitoring (ALLARM).

In the beginning (there was acid rain)

Back in 1985, when the problem of acid deposition (via acid rain) was just coming to light, a Pennsylvania state senator thought getting the public involved with the issue might help him attract interest in an acid deposition control act he was hoping to pass into law. So he brought in a group of local scientists to consult, and they decided to help people interested in local waterways collect data on acid deposits.

Among those scientists was Wilderman, whose initial reaction was that the data probably wouldn’t be good enough to use for scientific endeavors, but the exercise could serve as a good educational tool for both the public and students.

But as it turned out, the data were good.

“Not only was it a great educational project, but we were also producing some really useful data,” Wilderman says. “And there seemed to be a real need on the part of the public, with people who had a real connection to streams, to participate in helping to solve this problem. And that's how ALLARM started.”

The numbers have been piling up

Wilderman founded ALLARM as the Alliance for Acid Rain Monitoring in 1986, and along the way ALLARM kept the acronym while changing its name to the Alliance for Aquatic Resource Monitoring. Since then it's carried out its mission of assessing, protecting and restoring the state’s waterways through a wide array of projects, partnerships and programs built on a foundation of volunteer engagement and citizen science. (And Wildeman and ALLARM's Jinnie Monismith recently contributed an article, "Monitoring Marcellus," to the inaugural issue of the Citizen Science Association's new journal, Citizen Science: Theory and Practice.)

“Early on, ALLARM saw the value of community members using science as a tool to evaluate for themselves the health of streams and potential impacts,” says Julie Vastine ’03, ALLARM’s director since 2007. And that approach and its successes have proven to be easily quantifiable over the years:

Full circle into the future

Vastine, who majored in environmental science, has been an advocate for ALLARM since she was a student. Now as director she is helping to spearhead a multiyear, six-state Chesapeake Bay partnership while securing ALLARM a position on the National Water Quality Monitoring Council (NWQMC), something that sets the organization apart.

“I haven't seen other liberal-arts institutions at the policy tables,” Vastine says, noting that projects like the new Chesapeake initiative afford Dickinson students unique opportunities to engage policymakers on current issues. “Our federal and state colleagues say, ‘Wow, we've never had college students in the room for these kinds of conversations.’ "

“ALLARM was a teaching tool for me when I was a student and a significant part of my student experience,” says Vastine, who has traveled as far as Chiang Mai, Thailand, to train citizen scientists. “Now I see our students bringing new and innovative ideas to ALLARM while developing essential tools and skills in the environmental field. For me, it's a huge opportunity, getting to engage in these fantastic people's lives for this little snippet of time.”

Vastine sees even more exciting projects on the horizon, with plans to expand operations across six states and Washington, D.C., all while training the next group of citizen scientists.

“There is a lot of need out there, and we’re always thinking about the national volunteer monitoring community and the role ALLARM will play,” she says. “And we’ll have many more years of students getting the skills they need to make a change in our nation's, and our world's, environment.”