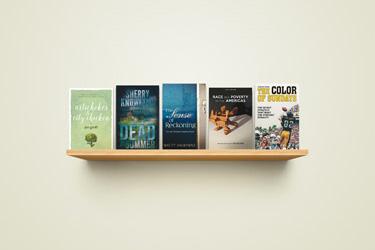 Years after her mother’s death, author Jan Groft ’71 faces the silence and secrets that separated them. Prompted by a prolonged struggle with writer’s block, she embarks on a journey of listening with the heart. Part memoir, part spiritual guide, Artichokes & City Chicken is a candid and poignant encounter with unresolved grief. Like the recipes of Groft’s mother sprinkled between chapters, the pages of Artichokes & City Chicken offer nourishment as they illuminate paths toward inner peace.

In her second book, Sherry Knowlton ’72 returns to south-central Pennsylvania, where young attorney Alexa Williams is starting to recover from last autumn’s trauma of finding a dead body and the violence that ensued. With almost a year gone by, she can’t believe that her summer has begun with the discovery of another body. In a tale that takes her from Pennsylvania to Africa to the iconic Woodstock Music Festival of 1969, Alexa becomes embroiled in the dangerous world of sex trafficking and is entangled in a web of deception and danger that puts both her heart and her life at risk. By the time she discovers that the key to the present lies in the halcyon days of peace and music, it may be too late.

The Sense of Reckoning

The Sense of Reckoning is the sequel to Matty Dalrymple ’85’s first Ann Kinnear suspense novel, The Sense of Death. It examines the effect that having an unusual skill—in Ann’s case, the ability to sense spirits—has on a person, and how that skill puts Ann and the people close to her in jeopardy. When Dalrymple completed her first book, she decided that independent publishing was a far more appealing option than the traditional route, especially with the growing popularity of “indy” in other industries such as film. She chose William Kingsfield Publishers as her imprint in honor of her father, who wrote under that pen name. (Google two of his short stories in Collier’s Weekly: “Tobe” from September 1952 and “Captain’s Counterfeit” from July 1954.) Successful independent publishing meant treating the business side of book creation with the same care as the creative side, including cover design, editing and promotion. Dalrymple recently ventured into audiobook production and speaks to writers’ groups about the independent publishing process. Read more from Dalrymple in her Closing Thoughts column.

Race and Poverty in the Americas

Race and Poverty in the Americas uses postmodernist deconstruction to present a libertarian understanding
of race and poverty and discusses how, in today’s world, race is used for profit. It teaches race theory from a humanities perspective to help students understand how race is made and used throughout society. The book also explains how the current state of race relations is conceptualized and suggests alternative ways to protect all minorities, especially the minority of the individual.

Andrew Conte ’93’s second book delves into the moments that shaped Pittsburgh Steelers history, both on the field and in the back room, and led the Steel City to four Super Bowl victories. The Color of Sundays tells the story of how Bill Nunn Jr., Art Rooney and the Steelers front office reshaped the franchise. Nunn’s strategy was simple: Scout talent where many other teams had failed, and bring in players from historically black colleges and universities. This period in Steelers history was instrumental in the building of the Steel Curtain defense, as well as the integration of important offensive picks, including the future Hall of Famer John Stallworth. Today the Pittsburgh Steelers are one of pro football’s most successful and prestigious franchises, thanks to the Steelers’ front office having its sights squarely focused on the future.