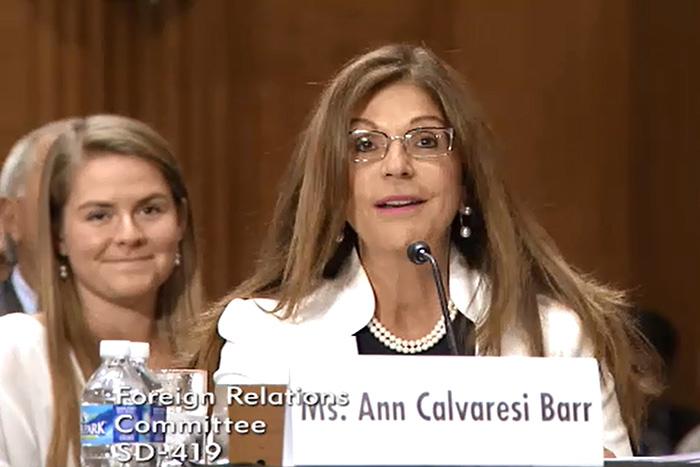 Ann Calvaresi Barr '82, with daughter Julianna '17 seated behind her, seen in a screengrab from footage of her confirmation hearing. 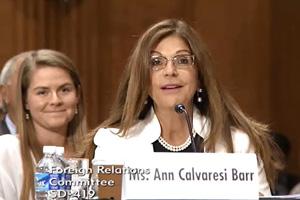 her, seen in a screengrab from footage of her confirmation hearing.

Ann Calvaresi Barr ’82 (political science) was recently named inspector general (IG) of the U.S. Agency for International Development (USAID), after being nominated for the post by President Obama. She spent 25 years at the Government Accountability Office (GAO), rising to senior executive status, and spent the last seven years in the Department of Transportation Office of Inspector General as the deputy IG, where recent audits and investigations uncovered far-reaching safety issues related to GM recalls, bridge inspections and pipeline integrity. Read on to see what drives her, how Dickinson touched her and her family and what she considers a can’t-miss concert.

Can you speak to how Dickinson’s useful liberal-arts education prepared you for your career?

The liberal arts at Dickinson emphasize thought across multiple disciplines and how to analyze a subject—whether it’s politics, social justice or economics—and develop an argument, or position, based on facts and logic. The program helped me develop intellectual curiosity, perseverance, humility and integrity and to have the courage and confidence to question long-held assumptions.

My semester in Washington, D.C., offered a practical way to learn. By engaging with government and industry leaders in the important work they do and by fulfilling a government internship as part of that semester, I realized that public service at the federal level was my passion. I applied and attended graduate school in Washington, D.C., as a result of my exposure to direct governmental operations.

My sorority—Kappa Kappa Gamma. Greek life was a lifeline for me. The Greeks hosted numerous events, ranging from community service outings to dance nights, and I met so many incredible people who I might not have met otherwise. It also prepared me for the world outside—how to navigate social situations, hold true to values and become an important part of a larger community. I served as VP of Kappa Kappa Gamma my senior year, and the leadership experience I gained from that has shaped my leadership approach ever since.

I also treasure my year being an RA in Drayer. Being a role model and mentor to my floor of freshman women was beyond rewarding and challenging. It taught me about responsibility and the importance of demonstrating integrity, trust and respect in all of our actions and through our words.

What jumps out isn’t a specific memory—rather, the lifelong friendships I developed. These bonds are still very much alive and deep today, and they are and will always be an important part of who I am. A special shout-out to Jan, Jenny, Hope, Ellen, Connie, Susan, Sue, Rob, Chris … and I could go on.

I participate in campus functions—speaking or otherwise—and maintain a strong link through my daughter, Julianna [Barr ’17], who is Pi Phi’s current president.

How did you get interested in your career, and what about it excites you?

I’ve always been drawn to public service. Early in my career, I was stationed in the General Accounting Office’s former European office and took part in overseeing plans for implementing AID programs. The work concerned international development efforts and the state of human rights conditions in the Middle East, Africa and Eastern Europe. I saw firsthand how foreign assistance programs, when implemented effectively, can help transform lives and unlock human potential.

When the White House informed me of the president’s intent to nominate me as USAID IG, I knew this was my calling.

As USAID’s inspector general, I oversee the work of auditors, investigators and special agents stationed around the world. Their work is critical to ensuring transparency, integrity and accountability not only at USAID but at the Millennium Challenge Corporation, U.S. African Development Foundation, Inter-American Foundation and the Overseas Private Investment Corporation. I work closely with members of Congress, as well as officials from other federal entities, foreign governments, industry and the academic and scientific communities.

Continually identifying and tackling problems with far-reaching implications. As the world becomes increasingly interdependent, these problems become increasingly complex. USAID conducts work in over 100 countries—many of which are hostile, remote or subject to corruption—so following the programs worldwide requires substantial planning and logistics to minimize the impacts that distance and unstable conditions can have on my staff and their work.

My marriage to my husband, David—we celebrated 30 years in 2015; the birth of my amazing daughter, Julianna; my first testimony before Congress; and taking and signing the oath of office at the USAID swearing-in ceremony.

I love to cook, so preparing dinner for an evening with my husband or for family and friends. While cooking can be work for some, it’s the artsy side of me and my release. I lose myself in it and forget everything else when I am preparing a meal, so it provides the needed break. And seeing others enjoy the cuisine and hospitality is immensely satisfying.

Bruce Springsteen. He moves a crowd with his amazing energy. I’ve been to a number of his concerts, and he never holds back. He gives so much of himself in each and every performance—it’s inspiring. I try to be that person in my work and relationships—I want to inspire, motivate, exhilarate and make everyone feel they’re a part of something bigger than themselves. I will be seeing him in D.C. at the Verizon Center on January 29—I wouldn’t miss it!

The White House in 2116. In 100 years, I think it’s highly probable that many of our current challenges related to energy, the environment, health care, agriculture, security and human rights will have been addressed to a great degree. I may be optimistic, but if you consider how far we have come over the last 100 years with regard to science, globalization and tolerance, I don’t think it’s far-fetched.