Marriage in the (Digital) Marginalia 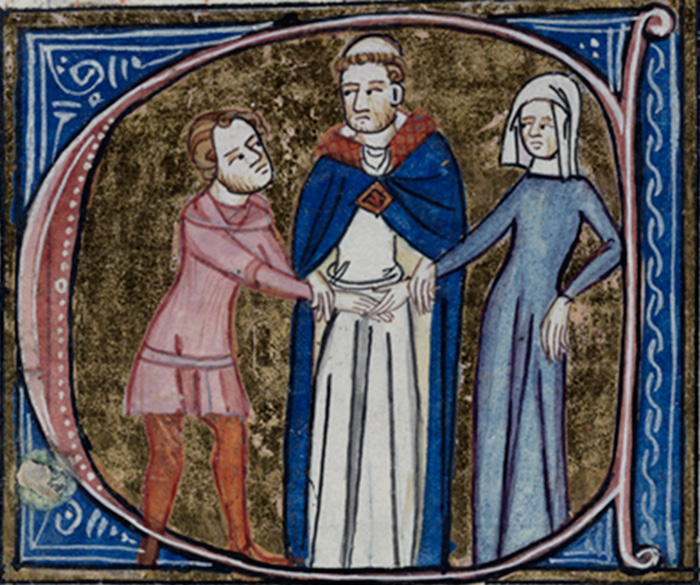 The politics, economics and theology of marriage have been matters of great national debate in recent years. But it is not the first time in Western history that marriage has been a hot-button social issue, says Assistant Professor of English Chelsea Skalak, who studies marriage through a medievalist’s lens.

Skalak is a recipient of the William T. Buice III Scholarship, awarded by the Rare Book School to support research on the history of written, printed and digital materials. Through it, she will launch a digital project next summer that focuses on accounts of the lives of 12th- through 15th-century married saints as part of a larger project investigating how medieval marriage law shaped and was shaped by innovations in medieval literature.

The newest addition to Dickinson’s English-department faculty, Skalak became intrigued by the lives of married saints after noticing the ways in which marriage was used in medieval literature as a metaphor in political, theological and economic theory. While researching marriage in 11th- through 15th-century England, she discovered that the institution of marriage was—then, as now—seeing considerable change. And as she explores these stories and how they changed over time, Skalak hopes to uncover how previous generations negotiated among church, state and family to construct definitions and roles of marriage, and how the changing narratives of the lives of married saints interacted with medieval marriage law.

Because her work focuses on the marriage of saints, Skalak taps an important area of medieval literature and introduces another layer of interest to the already complex area of marriage’s historic role in society, since there are relatively few accounts of married saints—the vast majority of Catholic medieval saints are, instead, said to be virgins—and marriage and celibacy remain hot-button issues in the Catholic church today.

Her task is complicated by the fact that medieval texts, which were hand-copied, can vary considerably from version to version. By transcribing centuries-old accounts of saints’ lives and marking up those transcriptions with XML (Extensible Markup Language), Skalak will be able to cross-reference differences and marginalia, important aspects of medieval-text scholarship. And because she makes her scholarship and source materials available online, her students and fellow scholars—who may not have access to different text versions, which are often housed in unique, remote archives—will be able to benefit as well.

Skalak's project is the latest in a series of digital-humanities projects underway at Dickinson. According to Skalak, the marriage of digitization and medieval scholarship is a perfect union.

“Medieval texts were made to be interacted with, not to sit as a standardized and unchangeable block in a textbook,” she says, noting that entire scholarly communities were built in the marginalia of ancient texts. “Digitizing these manuscripts opens up medieval studies to students and researchers who can’t travel to these archives, and I am very excited to add to that body of knowledge.”