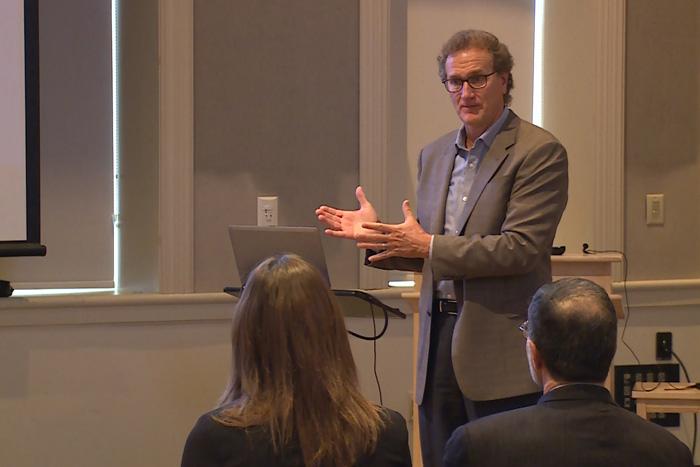 Former economics major John Michael Paz ’78 was a junior at Dickinson when he took a Thanksgiving-break trip that would steer his professional life. His father, John Sr., was a construction engineer and was considering importing English-made diesel pumps. He invited his son to check out an English pump factory; perhaps he’d like to take on the project after graduation?

“I was thinking of going to grad school for my M.B.A., so I wasn’t sure that I wanted to take that route,” Paz recalls. “So I went to three of my professors to ask their advice. And they all said that if I had a chance to start my own company, I should take that chance.”

Paz ran with that advice and became an award-winning business consultant and founder of the multimillion-dollar, international company, Godwin Pumps. In November, he returned to campus to talk with students who are interested in following a similar path to entrepreneurial success.

Jetting to the top

Paz’s company began as a three-employee, 18-pump operation, headquartered in a shared office. He rented English-made pumps and developed a box to encase them, reducing noise pollution on work sites. Within a few years, he’d secured exclusive import rights for 13 sites in the U.S. and, seven years after graduating from Dickinson, Paz made his first million in sales and built a new office building.

Paz opened his first U.S. branch in 1989, and by the dawn of the new century, he had 12 branches and 90 employees (including four directors, all hired in the same year), and was the head of Godwin Pumps America. By the time Godwin Pumps in England was sold to a large company in 2000, Paz was ready to acquire it. The following year, he became head of the biggest distributor of his product in the world, with 26 locations globally and 600 employees (he later purchased a jet to make site-to-site travel easier).

In 2010 Paz retired after selling Godwin Pumps. He now manages a real-estate company and serves as a leadership consultant. He received Ernst & Young’s Entrepreneur of the Year Lifetime Achievement Award in 2005.

In his recent talk with students, Paz stressed the need to innovate, hire wisely, cultivate mentorships, grow a business with cash whenever possible and find passion in one’s work. Asked what lessons he learned as an undergraduate that served him well, he said that being nimble and finding talented employees with shared passions are key.

“At Dickinson, I learned to be a broader-minded person, and I learned to think differently,” he said. “And the contacts I made have helped me connect with good people every step of the way.”