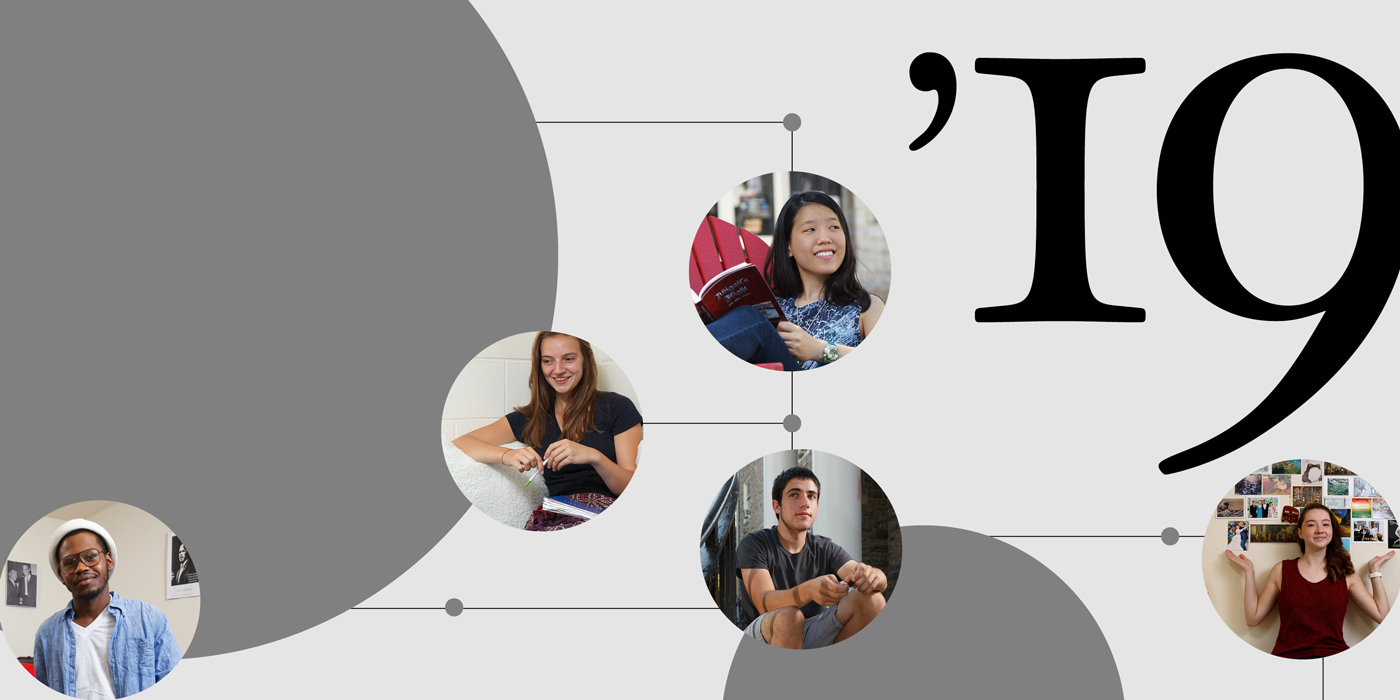 They hail from 31 states, plus Washington, D.C., and 27 foreign countries: the 731 members of the class of 2019 already are making a name for themselves as the largest class in the college’s history. We caught up with several of them during their first days on campus, and it was easy to see what all the hype is about. They are articulate, worldly, driven—and we can’t wait to see how they will shape our community.

Remember these names. You’ll be seeing them again as Dickinson Magazine tracks their progress over the next four years. And while they look to their new adventures as Dickinsonians, they already have counted tragedy among them, when first-year Jigme Nidup died in an accidental drowning just weeks after matriculating.

They know the next four years will be marked by their share of ups and downs; and when they are ready to leave these limestone walls to enter the alumni community, we will catch up with them again so you can see how they’ve grown, what they’ve accomplished and where they’re heading. 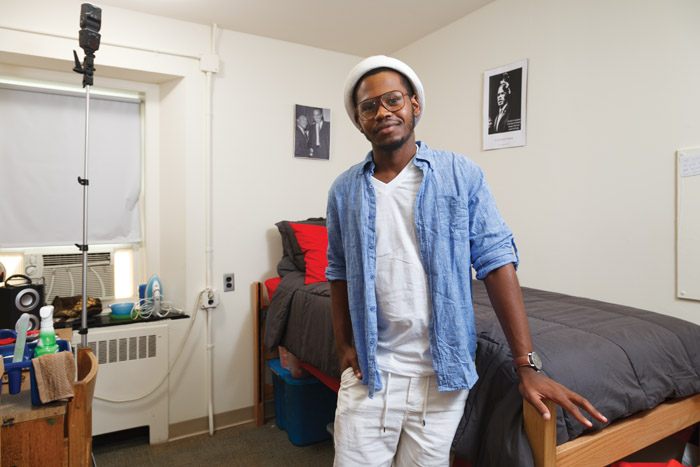 Why Dickinson? I’m passionate and intrigued about traveling abroad and Dickinson offers ample opportunities for me to have this experience. Additionally, I am interested in the Peace Corps, and Dickinson is one of the colleges that has a high number of Peace Corps volunteers annually.

Reading: The New Jim Crow, Kill Them Before They Grow and Convicted In the Womb.

Listening to: Fetty Wap (“Trap Queen” and “My Way”), J Cole’s album Forest Hill Drive and a myriad of gospel and R&B music.

Following: I’ve been tuning in to two podcasts: Things You Missed in History and Joel Osteen. These two completely different topics cover things that are important to me: history, spirituality and optimism.

Most meaningful item you brought to Dickinson: I have two posters so far that resonate with who I am currently. One is of Malcolm X with one of his famous quotes, “Education is the passport to the future, for tomorrow belongs to those who prepare today.” The other one emits much more power because it is a photo of Malcolm X and Dr. Martin Luther King Jr. shaking hands and smiling. They were polar opposites in the methods they used to fight the injustice of the ’60s, but both were fighting the same fight. When you recognize that someone is fighting the same fight as you, just with a different approach, a level of respect should arise.

Aspirations: I aspire to be at peace with myself, my family and my environment. I aspire to live my life, not to merely exist. Lastly, I aspire to find happiness. 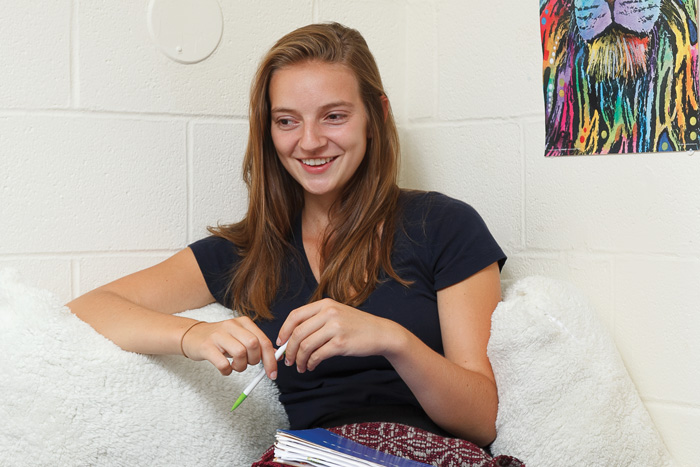 Why Dickinson? I was so impressed by the students’ passion for engagement and activism. I wanted to be a part of a community that is not only here to learn, but also to do.

Reading: Speak Now Against the Day: The Generation Before the Civil Rights Movement in the South; Hold Still; The White Man’s Burden: Why the West’s Efforts to Aid the Rest Have Done So Much Ill and So Little Good;
Let Us Now Praise Famous Men; and when all of that gets a bit heavy, The Mists of Avalon.

Watching: The Daily Show and Last Week Tonight, Masterpiece on PBS, Seinfeld, Jane the Virgin, Once Upon a Time and Sherlock.

Listening to: A Prairie Home Companion, classic rock and in general music from the 1920s ’30s and ’40s. I love listening to good TED Talks, fiddle music and, I’ll admit, a little Taylor Swift along with One Republic and
Mumford & Sons.

Most meaningful item you brought to Dickinson: I have a blanket that I made my senior spring at high school through the weaving program. It is made with wool from the sheep on the school’s farm.

Aspirations: I would like to help people. I don’t know what role I will play: perhaps I will be a lawyer or an activist or a teacher, but I would like to be able to change the systemic problems in our country that make the daily lives of hundreds unjustly hard. For now, I am hoping to possibly join the Peace Corps after college. As long as I am doing something I believe in, I will give it my all. 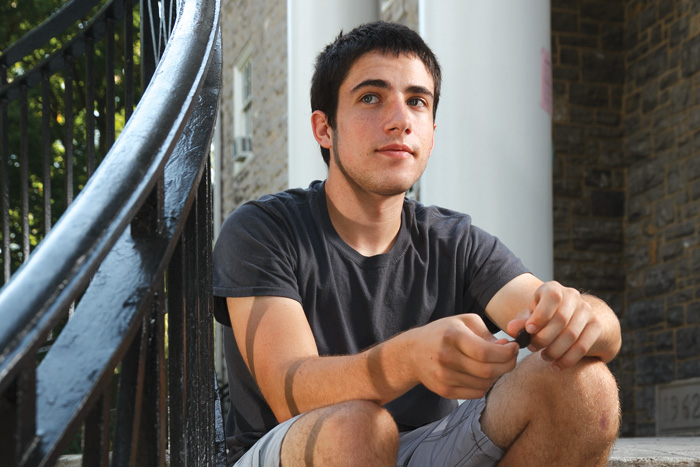 Why Dickinson? Ultimately the quality of the music program — and the warmth of the professors—is what drew me in. I was looking for a place that provided opportunities for interdisciplinary study and a wide range of very strong liberal-arts subjects; I found all that at Dickinson. Add to that the campus farm and it was a perfect fit!

Reading: The Illustrated Man, The Odyssey, Crime and Punishment.

Watching: Not much. I avoid most television and don’t watch very many movies.

Listening to: Everything from traditional bluegrass/gospel (The Fairfield Four, Ralph Stanley) to some of the old greats (J.S. Bach, Scarlatti, Stravinsky) and some other fun stuff like Tom Waits and Son Lux.

Following: For the most part I avoid social media. I do not have a smartphone and, unless I need one for professional life, hope never to get one. I do enjoy certain podcasts — my favorite is Dan Carlin’s Hardcore History.

Most meaningful item you brought to Dickinson: For much of my childhood I lived on a farm of sorts, and we heated our house entirely with a wood stove; every day in the winter I had to split logs and gather kindling for heat. I have a broken shard of metal from the splitting-maul that I keep on my desk as a reminder that no matter how deep into academia I go, no matter how soft my hands get, my character as a creative and a person is, and should be, shaped by discipline and labor.

Aspirations: This is how I look at it: the world needs wise people and good people as much as it needs smart people. I say this not in a clueless, ineffective way, but with all the wonderful seriousness it deserves: I want to be a good and useful person. I don’t have a specific job or career in mind yet (right now it’s a tossup between composer and stone mason). What is much more important than how I aspire to make money is what type of character I aspire to have. 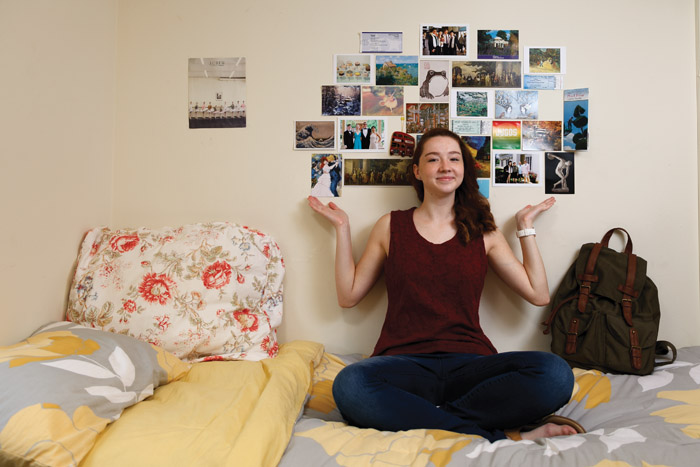 Why Dickinson? Dickinson has everything on my college wish list. The campus is beautiful, and the science facilities are some of the best that I have seen. My passion for ballet was a major part of my college decision, and Dickinson has an amazing dance department that connects with a world-class program, Central Pennsylvania Youth Ballet (CPYB), located just down the street. Also, the Kline Center and juice bar are pretty incredible.

Reading: The Paradox of Choice: Why More is Less.

Watching: I’m so far behind in everything, but if I had more time, I would catch up on Orange is the New Black, American Horror Story, Parks and Rec and Community.

Most meaningful item you brought to Dickinson: My dorm wall is filled with postcards with different paintings printed on them. Most of them are Impressionist paintings or modern art that I started collecting from museums I have visited, like the Louvre, the British Museum, the Museum of Fine Arts in Boston and the Smithsonian museums in Washington, D.C.

Aspirations: I would love to intern or work with performing arts companies, maybe in places such as the Kennedy Center or Lincoln Center, where I could merge my love of dance with my academics in psychology and business operations. I hope to find a career that can combine all of my interests into one. 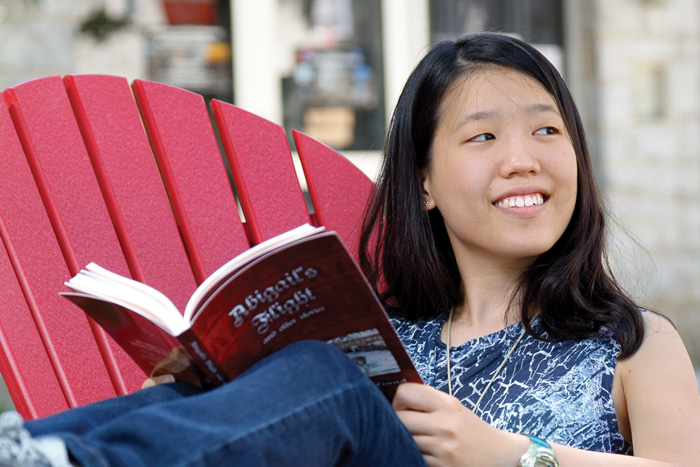 Why Dickinson? The stories about student-to-faculty relationships were what got me. The connections that seemed to go beyond what one would naturally expect from a college really made Dickinson stand out. I wanted to become a part of that.

Reading: Anything and everything I get my hands on. When I’m on a tight schedule, I content myself with cereal boxes.

Watching: Inside Out, Interstellar, The Secret Life of Walter Mitty, The Sound of Music, Midnight in Paris and Sherlock (BBC series).

Listening to: I like original soundtracks. I also listen to piano music when I write, because then my hands don’t automatically type the lyrics. Among the more modern singers, I like Adele and Christina Perri.

Most meaningful item you brought to Dickinson: My first book. As in, the first book that I wrote and got published. It’s called Abigail’s Flight and Other Stories, and it’s a children’s book about teenage reindeer living at the North Pole. Considering my dream to become a writer, I count this as the second step — the first was the literary magazine I ran.

Aspirations: I hope to become an author, as I really love imagining stories and writing them. 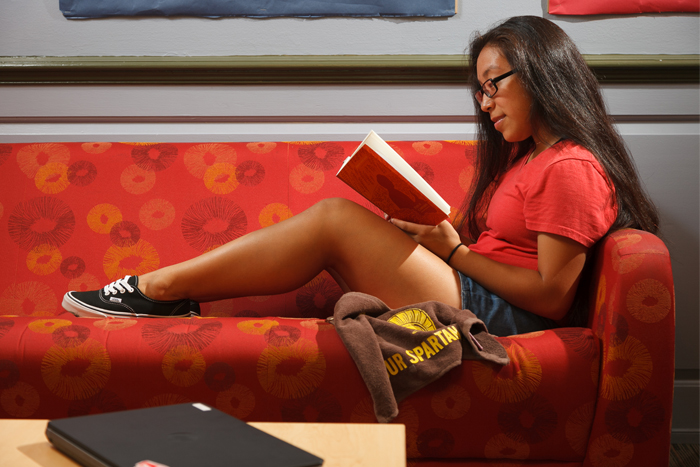 Why Dickinson: I chose Dickinson because of its friendly community. I felt a great vibe.

Reading: The Other Wes Moore.

Most meaningful item you brought to Dickinson: I [brought a towel from Milton Hershey] because I have a lot of pride in my school. It was a boarding school, so I basically saw everyone everyday. I learned to love the staff, my peers and my teachers. Everyone knew one another, and it allowed me to grow as a person. It just felt like home and shaped who I am today. Milton Hershey allowed me to have an opportunity many do not have: It allowed me to go to college!

Three adjectives to describe the next four years: Exciting, new and adventurous. 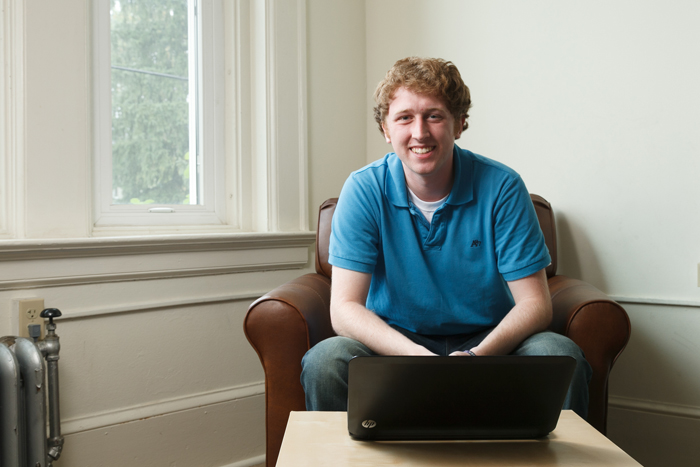 Why Dickinson? Coming from a small high school, I prefer the small school atmosphere. My guidance counselor spoke to me about going to community college (Northampton County), and then transferring to Dickinson to complete my bachelor’s degree (in 2017). I visited the campus several times and realized it would be a good fit. Being a policy-management major and having an interest in politics, I like the proximity of the college to Harrisburg.

Reading: The Greatest Comeback: How Richard Nixon Rose from Defeat to Create the New Majority.

Listening to: Music from the 1980s and presidential speeches from the past 50 years.

Most meaningful item you brought to Dickinson: My laptop because it helps me stay connected with friends, family and world events.

Aspirations: Since the age of 16, I've been employed part time at Giant Food Stores, and I'm interested in pursuing a career in management or human resources with Giant. I also have political aspirations at the state or federal level. 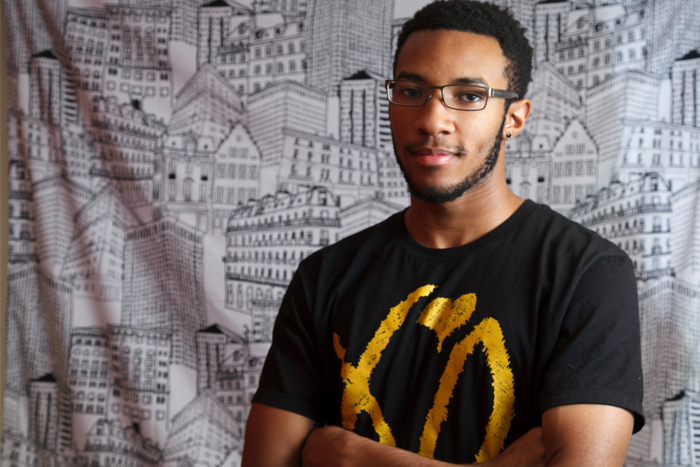 Why Dickinson? I selected Dickinson because the people I met here authentically made me feel welcomed and supported as a student, athlete and person of color. I want to be respected as a student who plays a sport and will contribute in other ways on campus.

Reading: The Great Gatsby is one of my favorite books.

Listening to: The Weeknd.

Most meaningful item you brought to Dickinson: My electronics. Getting connected and tuned in to the college network and classes and staying connected to my family.

Aspirations: I want to use my education to help myself and others. Success is meaningful only if you can help others along the way. That’s one of the life lessons my parents teach and show me and my brother every day.