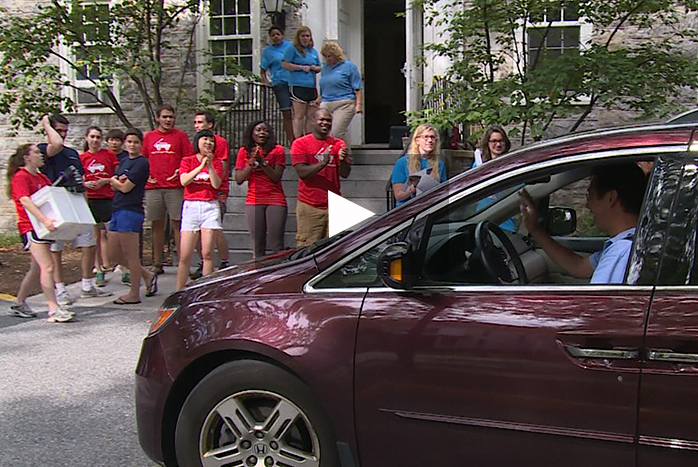 The first members of the class of 2019 arrive on campus.

With great energy and excitement, the first members of the class of 2019 arrived on campus

That call rang out from all corners of campus today as the first members of the class of 2019 arrived. They were greeted by first-year mentors and class deans. Their cars were unloaded by athletes and orientation assistants. They met roommates, perused information tents on Britton Plaza and posed for ID photos.

These early arrivals had signed on for Pre-Orientation Adventure programs, so quickly after settling in, some of them hit the road again, heading for nearby Michaux and Ohiopyle state parks and other Pennsylvania destinations for hiking, backpacking, ropes courses and more. Students participating in the on-campus programs began delving into creative writing discussions, perfecting performance techniques and engaging in entrepreneurship exercises.

On Wednesday, the rest of the class will make their entrance. And a grand entrance it will be, as in total, they represent the largest class in Dickinson’s history, coming from 31 states, plus Washington, D.C., and Puerto Rico, and 27 foreign countries.

After the Family Farewell reception on Wednesday evening, the official Orientation program will kick off. Follow all the action on social media through the Storify collection as #dson2019 begins making its mark on Dickinson, and join in the excitement by sharing your photos, experiences or words of welcome.