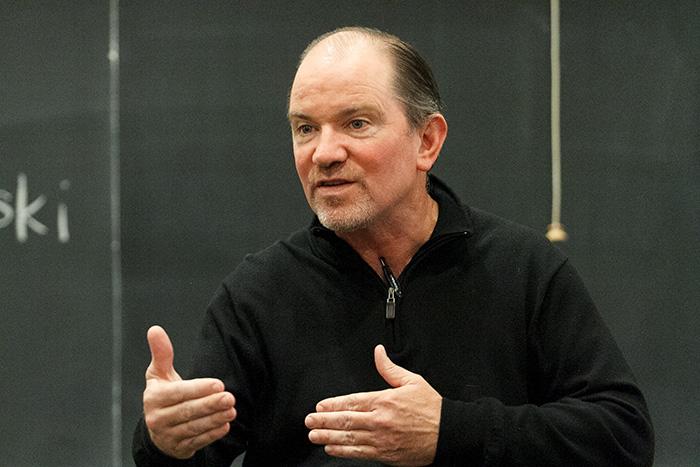 A 26-year veteran of the FBI, John "Jay" Bienkowski '85 recently visited campus and talked with students about his career. Photo by Carl Socolow '77.

John Bienkowski ’85 discusses his global career with the FBI

John “Jay” Bienkowski ’85 has been with the Federal Bureau of Investigation since 1989, but when he graduated from Dickinson with his economics degree, the idea of a career in law enforcement wasn’t even a blip on his radar.

Bienkowski worked for one of the Big Eight (now Big Four) accounting firms, and he wasn’t excited about it. In a journal he kept at the time, he documented his dissatisfaction with his professional life, punctuating it with, “This is not for me.”

“Every Monday morning I’d have a pit in my stomach thinking about going to work,” he recently told a group of Dickinson students who gathered to hear about his life and career as an FBI agent. “Every day with the FBI has been the exact opposite.”

What got Bienkowski motivated to change his path was a little self-reflection.

“I asked myself, ‘What do I care about?’ ” And he found that his answer was three-pronged: justice, a sense of right and wrong and something a lot of people would like in a career but probably never get. “Really, what I wanted was a little adventure. So I narrowed the list down to astronaut, pilot and FBI agent. Astronaut seemed like a longshot.”

Two years into his accounting career, Bienkowski began the yearlong process of becoming an FBI agent. When he was accepted, he quit his accounting job and began studying at the FBI Academy in Quantico, Va. There, he was immersed in issues swirling through federal law enforcement—counterterrorism, financial crimes, violent crimes—all with an underpinning of physical fitness and firearms training.

His first assignment was in Houston, and, fittingly, he investigated financial crimes, those surrounding the savings and loan crisis making headlines in the 1980s and 1990s. His next big case was unraveling a massive Ponzi scheme, and then it was off to Portland, Ore., for nearly five years working in the realms of white-collar crime, civil rights, cybercrime, organized crime and violent crime. Warsaw, Poland, followed, as did stints in Turkey, Armenia, Georgia (the country) and Azerbaijan—where he teamed up with various agencies working out of the embassies.

Bienkowski is now a supervisory special agent stationed in Washington, D.C., and his wife has recently retired from the FBI. He says a variety of majors can lead to FBI careers, but he placed special emphasis on languages and computer science.

“Every agency is scrambling, especially in terms of cybersecurity, to get the best and brightest in computer science,” he said, noting that “Dickinson’s security studies certificate would also work in your favor.”