Presenting to the Pros 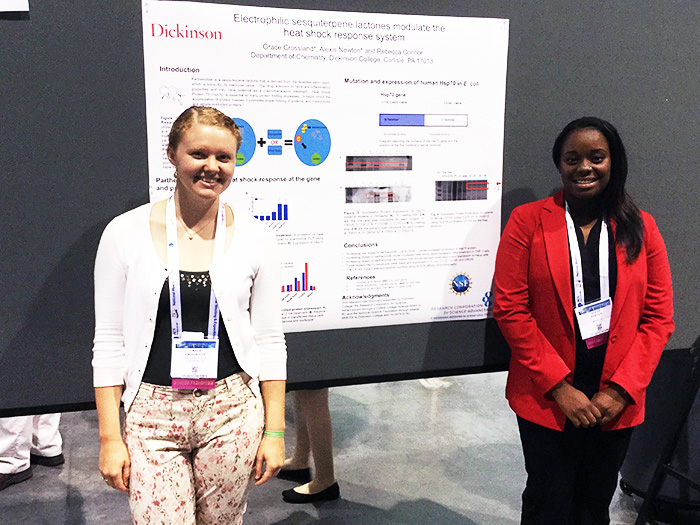 Imagine conducting an interesting experiment and then getting a chance to share what you’ve learned with the pros. That scenario became reality for four students when they traveled to Boston to take part in the American Chemical Society (ACS)’s 250th-annual national meeting and exposition, which brought together more than 10,000 scientists and student-scientists to present their latest original research.

“I was nervous, but it went well,” said Grace Crossland '18 (biochemistry & molecular biology), who reported on student-faculty research she’d conducted during her first year at Dickinson. “People took a lot of interest in the work I had done, and they were very encouraging.”

As Professor of Chemistry Amy Witter noted, it wasn’t completely unfamiliar territory, since all science majors at Dickinson present original research to a large crowd during Dickinson’s annual Science Student Research Symposium. “But when the people walking by and asking questions are professional chemists—not peers and professors—it takes the presentations to a whole new level,” said Witter, who supervised the students’ ACS presentations along with fellow attendee Assistant Professor of Chemistry Rebecca Connor. “You don’t know what questions people will ask, so it can be intimidating initially, but they did great.”

A recipient of the prestigious EPO-GRO grant, Greenberg discussed experiments he conducted with Witter last year on the concentrations of known carcinogens and mutagens in coal-tar-based sealcoat. “This was my first professional conference, and I had a great time,” he said, adding that he expects to present research and lead lab meetings in graduate school, and he feels better prepared as a result of this experience. “It was stimulating and very fun to be surrounded by so many scientists who love chemistry as much as I do.”

McGowan presented what he'd learned while investigating the effects of a compound found in daisies on the heat shock response in leukemia cells, as did Crossland and Newton, who also worked with Connor last year.

“I didn't present until the last full day, so I was able to attend a bunch of lectures and poster presentations and see what some of the best scientists are working on,” said McGowan, an ALLARM volunteer who is planning to pursue a career in metabolic engineering and green chemistry. “And by networking with several experienced biochemists, I gained a better understanding of my options in the industry and academia after graduation.”

The experience was equally helpful to those just starting out on the career-exploration path. "As a sophomore, I am still not sure what my career plans are, but even if I don't continue down a research path, this conference increased my confidence and exposed me to another [career] possibility," said Crossland. "And starting to create a network for myself will only increase the number of opportunities I will have in the future."