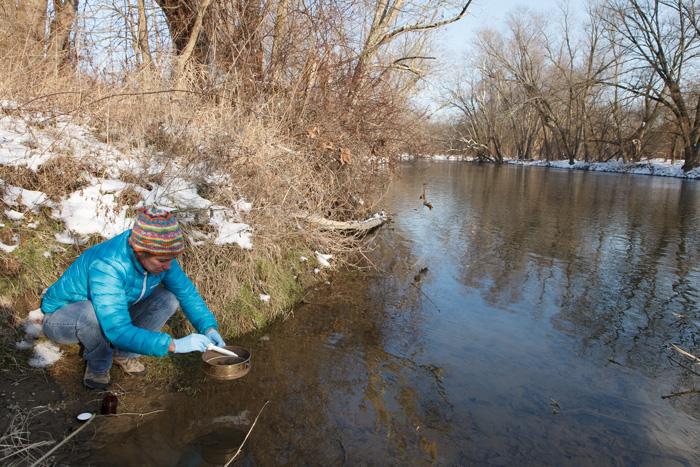 Researchers at Dickinson have new evidence suggesting that a product used widely by homeowners and businesses to enhance the durability of asphalt driveways is a major source of stream contaminants linked to cancer and other health effects. A study of the Conodoguinet Creek led by Associate Professor of Chemistry Amy Witter and colleagues was published online in the journal Environmental Pollution.

The study marks the first comprehensive identification of coal-tar-based sealcoat as a major source of known toxins called polycyclic aromatic hydrocarbons (PAHs) in a Pennsylvania waterway. The Conodoguinet Creek, a 90-mile tributary of the Susquehanna River, ribbons through Cumberland and Franklin counties' diverse landscapes, small towns and urban centers and serves as a valued source of drinking water and recreation in the region.

Home and business owners are often unaware of the chemical composition of sealcoat applied to their driveways or places of business. Runoff from impervious surfaces coated with sealcoat, such as residential driveways and commercial parking lots, transport PAHs to the Conodoguinet Creek, where they accumulate in sediment.

Sealcoat comes in two formulations: asphalt-based, which contains lower concentrations of PAHs, and coal-tar-based, which contains higher concentrations of PAHs. The coal-tar-based formulation is widely used east of the Continental Divide and contains 1,000 times higher PAH concentrations than its asphalt-based counterpart, which is used throughout much of the western U.S. Two states (Minnesota and Washington), several municipalities and counties and Washington, D.C., have banned coal-tar-based sealcoat use. Some retailers, such as Home Depot and Lowe's, no longer carry the sealant.

Witter led a team of Dickinson researchers, including Earth sciences professor Peter Sak, and two student chemistry majors, Sunil Baidar '09 and Minh H. Nguyen '11, collecting creek sediments at 35 locations throughout the watershed. This work benefited from additional collaborations with Dickinson Geographic Information System (GIS) specialists Jim Ciarrocca and Kristen Brubaker and additional scientists at the University of Toronto. The researchers found acceptable or "below probable effect" levels of PAHs to aquatic organisms in 10 locations; however, one site located in Franklin County exceeded this value. Twenty-four sites fell between these guideline values.

The researchers employed sophisticated GIS technology in conjunction with chemical measurements to identify and quantify the links between land use and pollutants. The study shows a strong correlation between high residential and commercial land use—or urban sprawl—and increased levels of PAH. Statistical analysis identified the major PAH source in urban reaches of the creek to be from coal-tar-based sealant.

Results of the Conodoguinet Creek study are consistent with scientific studies carried out by the United States Geological Survey and others that have identified coal-tar-based sealcoat as the primary cause of upward trends in PAH concentrations due to increasing urban sprawl.

"This study provides independent confirmation of the importance of coal-tar-based sealants as the major source of PAHs in urban sediments east of the Rocky Mountains," says Judy Crane, a research scientist at the Minnesota Pollution Control Agency, which disseminates information on how to provide safer sealcoat programs for cities, schools, watershed groups and others in the Great Lakes region.

"Protecting local aquatic resources may be best served through targeted citizen education about the possible unintended consequences of coal-tar-based sealcoat use," says Witter.

Read more coverage of this research news in the Harrisburg Patriot-News.